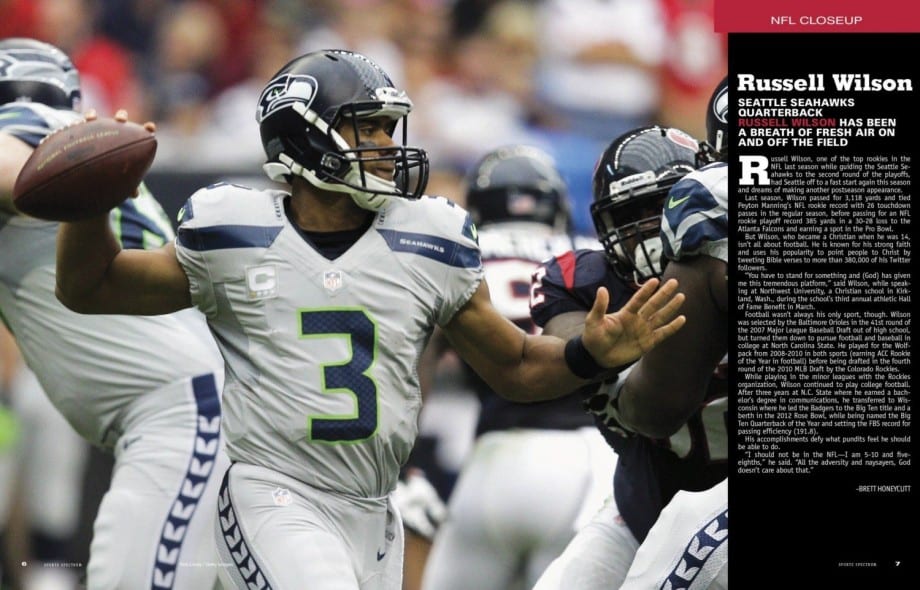 Russell Wilson, one of the top rookies in the NFL last season while guiding the Seattle Seahawks to the second round of the playoffs, had Seattle off to a fast start again this season and dreams of making another postseason appearance.

Last season, Wilson passed for 3,118 yards and tied Peyton Manning’s NFL rookie record with 26 touchdown passes in the regular season, before passing for an NFL rookie playoff record 385 yards in a 30-28 loss to the Atlanta Falcons and earning a spot in the Pro Bowl.

But Wilson, who became a Christian when he was 14, isn’t all about football. He is known for his strong faith and uses his popularity to point people to Christ by tweeting Bible verses to more than 380,000 of his Twitter followers.

“You have to stand for something and (God) has given me this tremendous platform,” said Wilson, while speaking at Northwest University, a Christian school in Kirkland, Wash., during the school’s third annual athletic Hall of Fame Benefit in March.

Football wasn’t always his only sport, though. Wilson was selected by the Baltimore Orioles in the 41st round of the 2007 Major League Baseball Draft out of high school, but turned them down to pursue football and baseball in college at North Carolina State. He played for the Wolfpack from 2008-2010 in both sports (earning ACC Rookie of the Year in football) before being drafted in the fourth round of the 2010 MLB Draft by the Colorado Rockies.

While playing in the minor leagues with the Rockies organization, Wilson continued to play college football. After three years at N.C. State where he earned a bachelor’s degree in communications, he transferred to Wisconsin where he led the Badgers to the Big Ten title and a berth in the 2012 Rose Bowl, while being named the Big Ten Quarterback of the Year and setting the FBS record for passing efficiency (191.8).

His accomplishments defy what pundits feel he should be able to do.

“I should not be in the NFL—I am 5-10 and five-eighths,” he said. “All the adversity and naysayers, God doesn’t care about that.”