The Mind of McCutchen 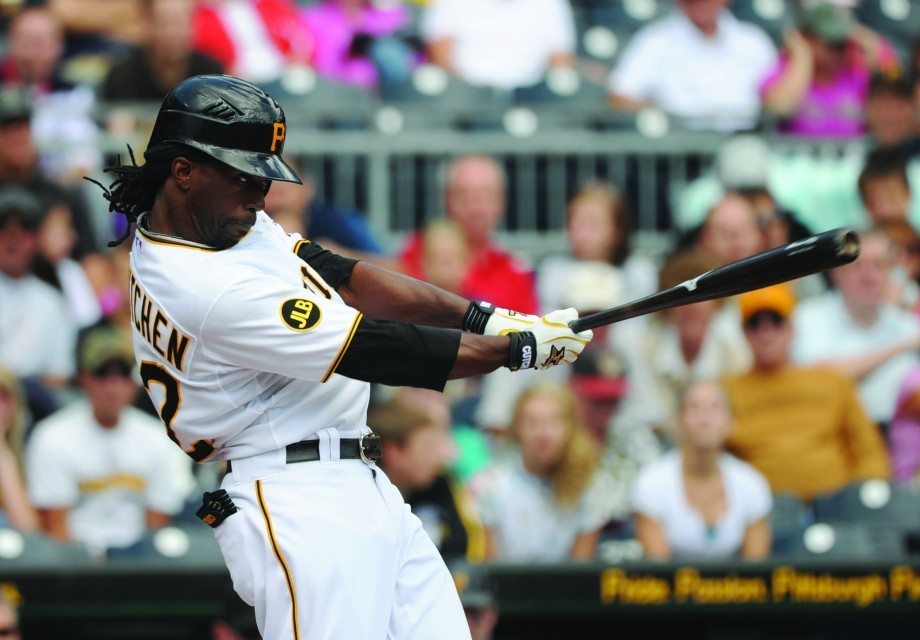 Since being awarded the National League MVP in November, Pittsburgh Pirates star Andrew McCutchen gets the questions all the time.

What’s the key to success?

How did you get the MVP?

What makes you so calm and confident?

McCutchen’s start to the 2013 season, however, wasn’t exactly MVP-caliber. After signing a five-year contract extension the season before, McCutchen was quickly dubbed the savior of the Pittsburgh Pirates, the one who would help them bury their 20-year playoff slump and break their 20-year losing season streak, the longest in professional sports. He was the “Face of the Franchise,” with his warm smile and trendy dreadlocks, but he was hardly living up to that expectation.

“If you would’ve told me at the start of the year that I was going to win the MVP,” McCutchen laughs, “I would have said, ‘I don’t know about all that.’”

McCutchen’s April batting average ranked 12th—and no, not in the league—on his own team. His slump at the end of April, a rotten 1-for-28 dry spell, was the worst of his career. In a contest against the Cardinals, McCutchen was even removed from the game.

His problems stretched into May, too, where he had another 2-for-19 slump, his second drought in the Pirates’ young season.

“My spring training wasn’t the best start ever,” McCutchen reflects. “Didn’t do too well. I didn’t feel the same way (I did the year before.) And the season had the same feeling. The first couple months were pretty difficult for me.”

Eventually, of course, his circumstances changed.

But not until he changed his way of thinking.

Bigger In The Low

Jump forward seven months. McCutchen nervously sits on stage at “The Ellen DeGeneres Show” as DeGeneres asks him, “Are you single, are you dating anyone?”

McCutchen points out his girlfriend of four years, Maria Hanslovan, in the audience, then asks her to come on stage. A video chronicling their relationship appears on the screen, McCutchen professes his love on one of the most popular talk show in America, then gets down on one knee and asks her to marry him. Hanslovan says “yes,” making McCutchen not only the best baseball player in the country but also probably the most romantic.

“I was trying to catch my breath,” McCutchen recalls. “Ellen was talking to me, and I don’t know, she started talking and I was talking back—then she jumped straight to the questions about Maria.

“She was supposed to ask me a couple more questions,” McCutchen laughs. “The fact she went straight to it made me more nervous. To her defense, she thought I was too nervous to even answer any more questions.”

It’s his fiancé Maria Hanslovan, McCutchen says, that helped him through his slump at the start of the 2013 season.

She didn’t fix it. She just pushed him deeper.

“We do a devotion together every day,” McCutchen says. “There were a few that we did and one that really stood out and made me think about my career. It made me ask the question, ‘Is my career more important or is my relationship with God more important?’ At the time, I was like, ‘You know what? The game of baseball has been kind of overtaking me.’”

It’s easy to understand how a guy like Andrew McCutchen could feel the pressure from a game like baseball. Whether it’s Barry Bonds or Doug Drabek, the Pirates are infamous for either losing their best players to free agency or trading them away. McCutchen may be the first sign of hope in Pittsburgh since the early 1990’s. And he seems to be in Pittsburgh to stay. But he also knows that, in a game as mental as baseball, succumbing to the pressure isn’t going to produce good results.

“From there, from that moment, everything just fell into place. I had a bigger outlook into things as the season.”

It really is fascinating to get a look inside the mind of one of the best players in the world, to catch a glimpse into the mentality of a player who went on to lead the Pirates in just about every offensive statistical category (hits, runs, doubles, batting average, on-base percentage and slugging percentage), won the NL MVP award by a landslide (receiving 28 of the 30 first-place votes), and helped lead the Pirates to their first post-season appearance and winning season in 20 years.

And the look inside may surprise you.

“I was maybe hitting .200 the first month and the second month wasn’t that much better, and out of nowhere I started picking it up and getting better and getting better,” McCutchen recalls. “But that didn’t just happen. I was getting closer to God. The closer I got to God, the closer relationship I got with Him, the easier it was to play the game of baseball.”

McCutchen is not one who believes God grants him success on the field if he pays his respects. He doesn’t believe God is a lucky rabbit’s foot or genie. But he does believe that having a worldview bigger than baseball and an identity breaching deeper than his batting average has the ability to free up his mind. Plus, enjoying and experiencing a constant God makes for a much better life than enjoying and experiencing the ebb and flow of an inconstant game.

“The game is not mine,” McCutchen says. “It doesn’t control me. I give it all to God. People say that when something happens to you with the Lord, you start to see things different. That’s kind of the way I started seeing things…and the more I started to see things differently, the more my game took off. I think that, in a nutshell, is kind of what I tell people. My success, that’s how it happened for me.

“I’m not saying that you get results on the field because you give your life to God. But it’s just the fact of saying that if there is anything in life that you do or anything that you want, make God the center of your attention, and He will open your eyes to make things a lot easier for you to see. And it makes failure easier to be able to encounter because you know that God is there. You know it’s just an obstacle He put you through to get you where He wants you to go.”

Bigger In The High

What’s most intriguing, perhaps, is that his worldview does not change in light of winning one of the most prestigious awards in Major League Baseball. When you ask him about it, you probably won’t get much more than a laugh and a simple, “It’s awesome, it’s cool.”

Just as a .200 batting average at the start of the season wasn’t what is most true of him, neither is an award. An identity that begins and ends with something this world creates is, frankly, a shallow identity.

McCutchen’s identity, rather, is in two things: loving others and loving God.

“If I fail, I know that I’ll be alright because I have so many things I can look at and know that, you know what, my life isn’t based on results,” McCutchen says. “My life is based on how I can make a difference in someone else’s life…There are other things in life that are so much more important that the game of baseball.”

It’s why McCutchen views each game as an opportunity to serve the sometimes 40,000 people that pack into PNC Park to watch the Pirates.

It’s also why McCutchen is the spokesperson for Habitat for Humanity of Greater Pittsburgh and founded Cutch’s Crew in 2010, an organization that mentors inner city youth baseball players and at-risk children.

And it’s also why McCutchen approaches professional sports in a way that may as well be labeled counter-cultural.

“For me as a player, I’m not a big personal goal person,” McCutchen says. “I feel like personal goals can make you become selfish. It’s a team sport. If I want to hit .300 for the year, and I’m in the last month of the year and I’m at .295, then I’m going to start thinking selfishly that I need to get some hits so I can get my average up. Then I start thinking more about myself than I do my team. The only personal goal I set for myself is: What can I do to make the team better?”

Winning the NL MVP will certainly do that.

And yet, as good as 2013 was for Andrew McCutchen, it’s his perspective that developed throughout the year that allows him to say the following:

“I know there are a lot of people who would love to have the MVP,” McCutchen says. “It’s awesome to have it. But when you start to figure out that the Lord is the foundation of your life, the MVP is nothing compared to the love of God and what He can do for your life.