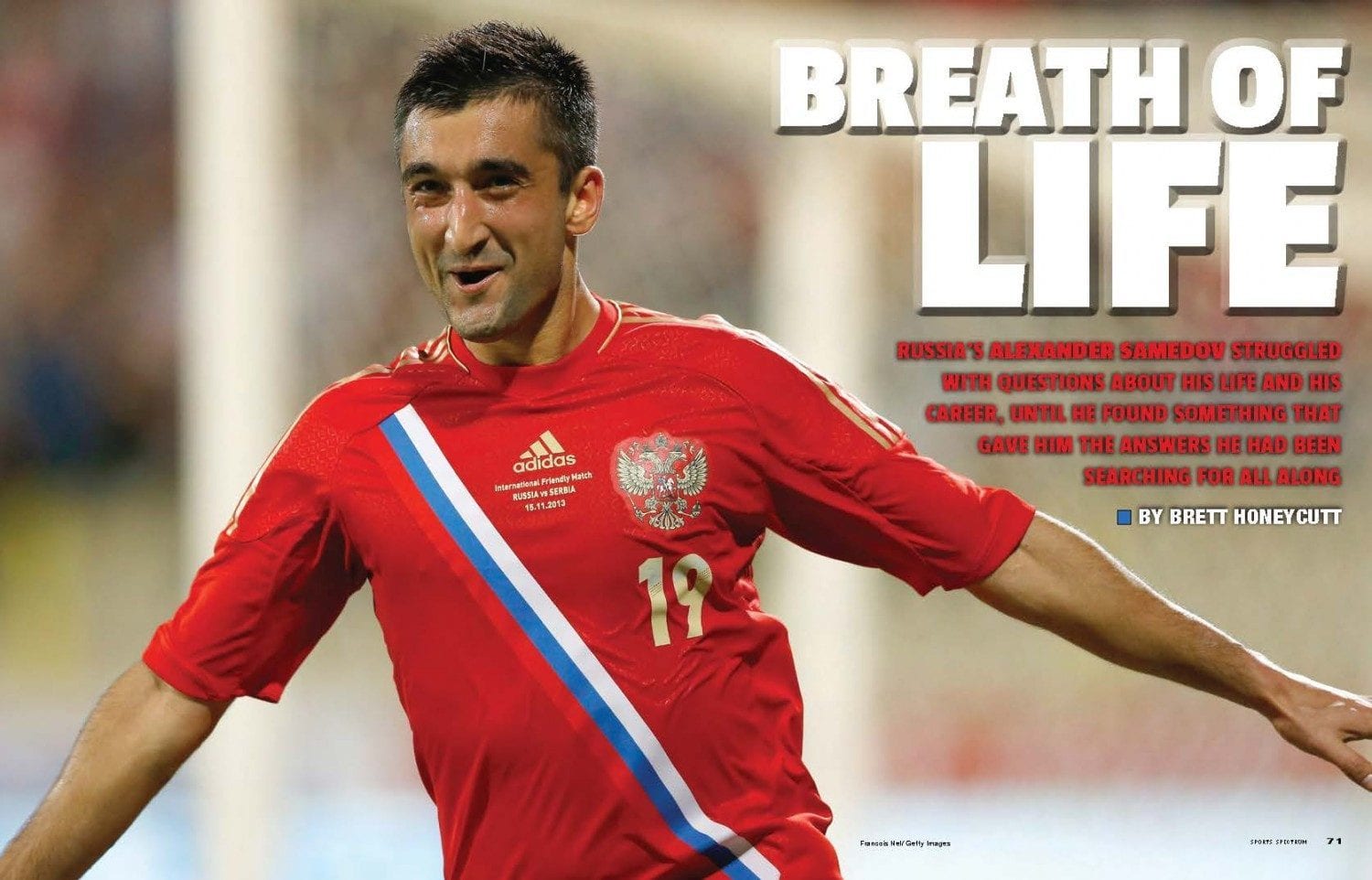 Growing up in a family split in their religious beliefs, Alexander Samedov decided he would live his life in his own way and on his own terms.

Until trouble came and he was left searching for answers.

Samedov, who has represented Russia internationally on the U-21 and senior soccer national teams and has also played on several top Russian club teams, started having trouble in his soccer career and in his life. That’s when the questions started, first in his mind and then verbally.

“My father is a Muslim. He’s Azerbaijani. My mom is (Russian) Orthodox; she’s (ethnically) Russian. Going back to the very beginning, I grew up between two camps, so to speak,” Samedov shared in a television interview. “My father always told me that I was a Muslim. My mom didn’t agree with that.  I didn’t really go in either direction. I lived my life in my own way. But a time came when I began to have problems in my career, in my life. I had already reached the age to be thinking about those things. And then I met my current wife, Yulia. She was a believer; she went to church. Seeing my problems, she simply said to me, ‘Sasha, such and such…’ I came to church once, twice, and I understood.  My life began to change.”

Though Samedov admitted that “reading wasn’t the most important thing” for him growing up because he went to sports school and he “paid more attention to sports” than academics, he has loved reading the Bible since becoming a Christian. 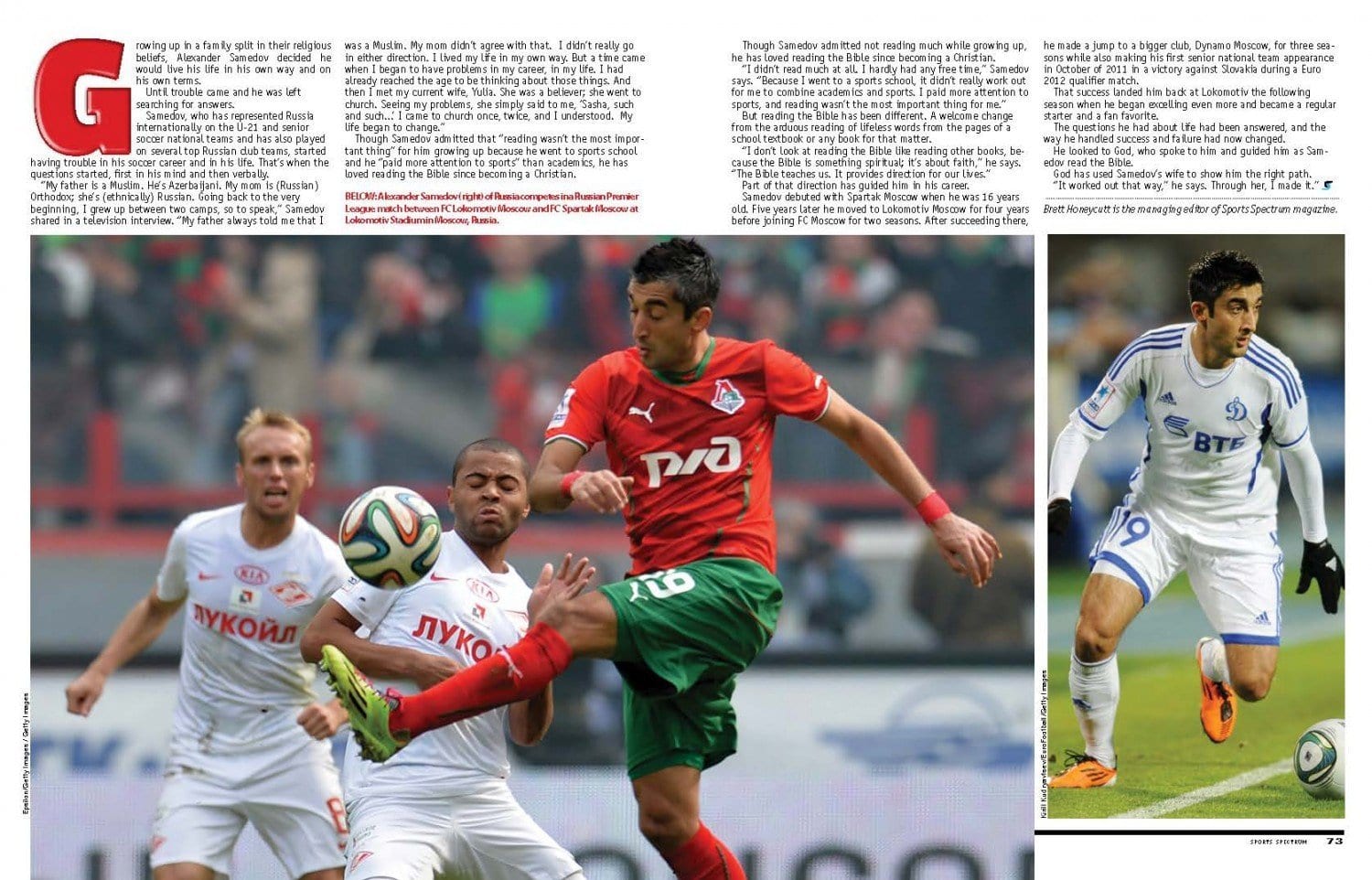 Though Samedov admitted not reading much while growing up, he has loved reading the Bible since becoming a Christian.

“I didn’t read much at all. I hardly had any free time,” Samedov says. “Because I went to a sports school, it didn’t really work out for me to combine academics and sports. I paid more attention to sports, and reading wasn’t the most important thing for me.”

But reading the Bible has been different. A welcome change from the arduous reading of lifeless words from the pages of a school textbook or any book for that matter.

“I don’t look at reading the Bible like reading other books, because the Bible is something spiritual; it’s about faith,” he says. “The Bible teaches us. It provides direction for our lives.”

Part of that direction has guided him in his career.

Samedov debuted with Spartak Moscow when he was 16 years old. Five years later he moved to Lokomotiv Moscow for four years before joining FC Moscow for two seasons. After succeeding there, he made a jump to a bigger club, Dynamo Moscow, for three seasons while also making his first senior national team appearance in October of 2011 in a victory against Slovakia during a Euro 2012 qualifier match.

That success landed him back at Lokomotiv the following season when he began excelling even more and became a regular starter and a fan favorite.

The questions he had about life had been answered, and the way he handled success and failure had now changed.

He looked to God, who spoke to him and guided him as Samedov read the Bible.

God has used Samedov’s wife to show him the right path.