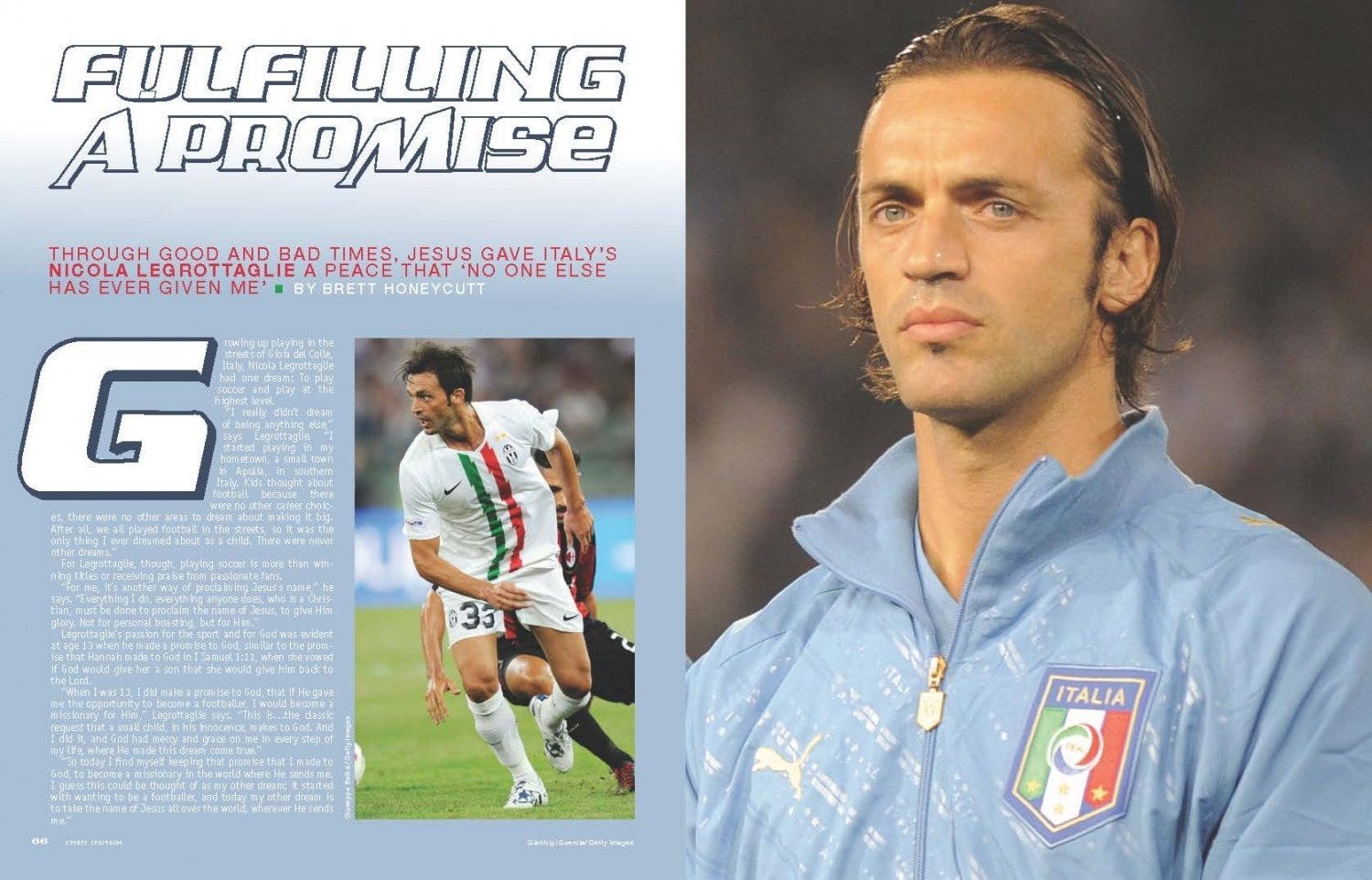 Growing up playing in the streets of Gioia del Colle, Italy, Nicola Legrottaglie had one dream: To play soccer and play at the highest level.

“I really didn’t dream of being anything else,” says Legrottaglie. “I started playing in my hometown, a small town in Apulia, in southern Italy. Kids thought about football because there were no other career choices, there were no other areas to dream about making it big. After all, we all played football in the streets, so it was the only thing I ever dreamed about as a child. There were never other dreams.”

For Legrottaglie, though, playing soccer is more than winning titles or receiving praise from passionate fans.

“For me, it’s another way of proclaiming Jesus’s name,” he says. “Everything I do, everything anyone does, who is a Christian, must be done to proclaim the name of Jesus, to give Him glory. Not for personal boasting, but for Him.”

Legrottaglie’s passion for the sport and for God was evident at age 13 when he made a promise to God, similar to the promise that Hannah made to God in I Samuel 1:11, when she vowed if God would give her a son that she would give him back to the Lord.

“When I was 13, I did make a promise to God, that if He gave me the opportunity to become a footballer, I would become a missionary for Him,” Legrottaglie says. “This is…the classic request that a small child, in his innocence, makes to God. And I did it, and God had mercy and grace on me in every step of my life, where He made this dream come true.”

“So today I find myself keeping that promise that I made to God, to become a missionary in the world where He sends me. I guess this could be thought of as my other dream; it started with wanting to be a footballer, and today my other dream is to take the name of Jesus all over the world, wherever He sends me.” 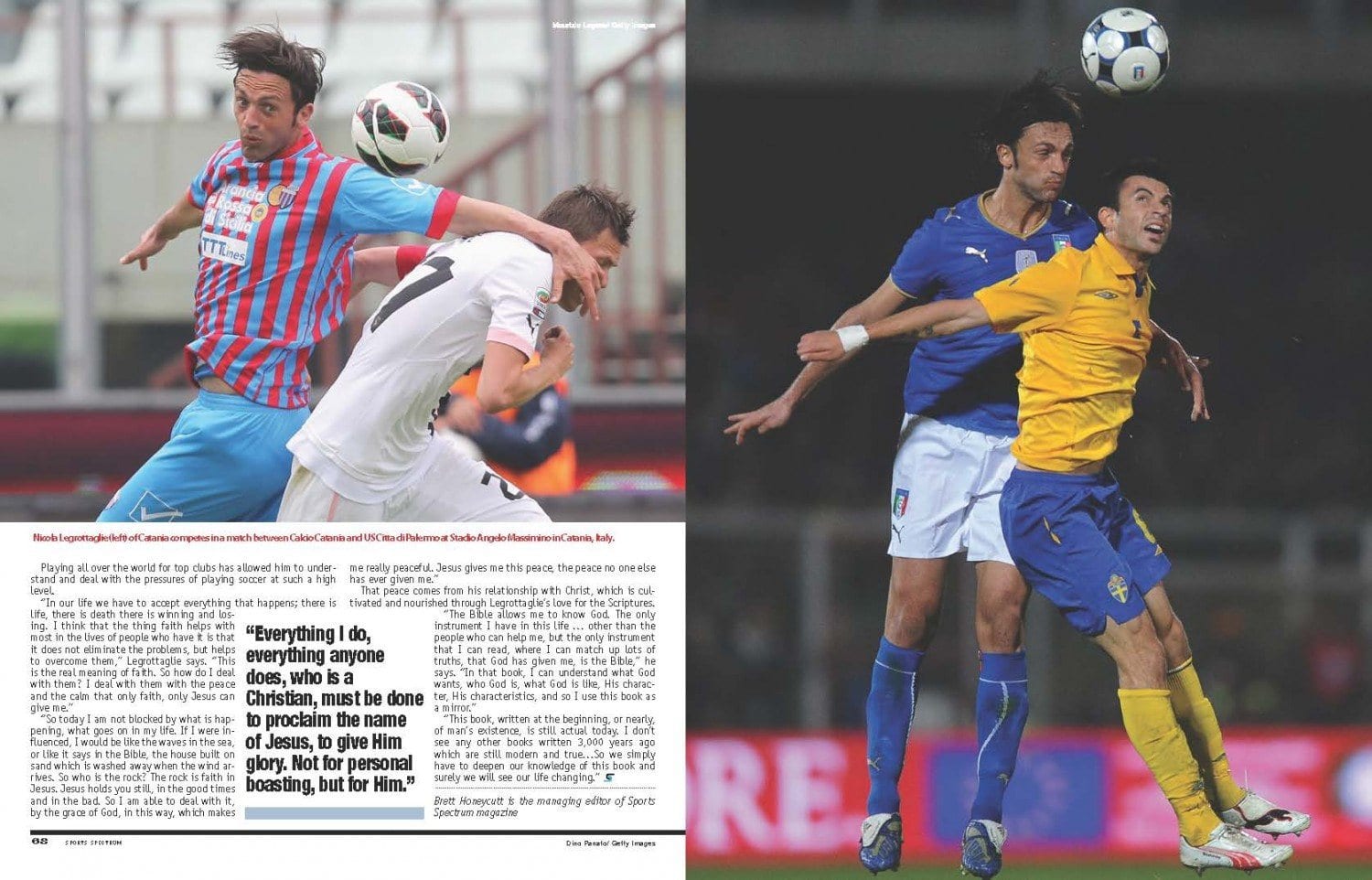 Playing all over the world for top clubs has allowed him to understand and deal with the pressures of playing soccer at such a high level.

“In our life we have to accept everything that happens; there is life, there is death there is winning and losing. I think that the thing faith helps with most in the lives of people who have it is that it does not eliminate the problems, but helps to overcome them,” Legrottaglie says. “This is the real meaning of faith. So how do I deal with them? I deal with them with the peace and the calm that only faith, only Jesus can give me.”

“So today I am not blocked by what is happening, what goes on in my life. If I were influenced, I would be like the waves in the sea, or like it says in the Bible, the house built on sand which is washed away when the wind arrives. So who is the rock? The rock is faith in Jesus. Jesus holds you still, in the good times and in the bad. So I am able to deal with it, by the grace of God, in this way, which makes me really peaceful. Jesus gives me this peace, the peace no one else has ever given me.”

That peace comes from his relationship with Christ, which is cultivated and nourished through Legrottaglie’s love for the Scriptures.

“The Bible allows me to know God. The only instrument I have in this life … other than the people who can help me, but the only instrument that I can read, where I can match up lots of truths, that God has given me, is the Bible,” he says. “In that book, I can understand what God wants, who God is, what God is like, His character, His characteristics, and so I use this book as a mirror.”

“This book, written at the beginning, or nearly, of man’s existence, is still actual today. I don’t see any other books written 3,000 years ago which are still modern and true…So we simply have to deepen our knowledge of this book and surely we will see our life changing.”