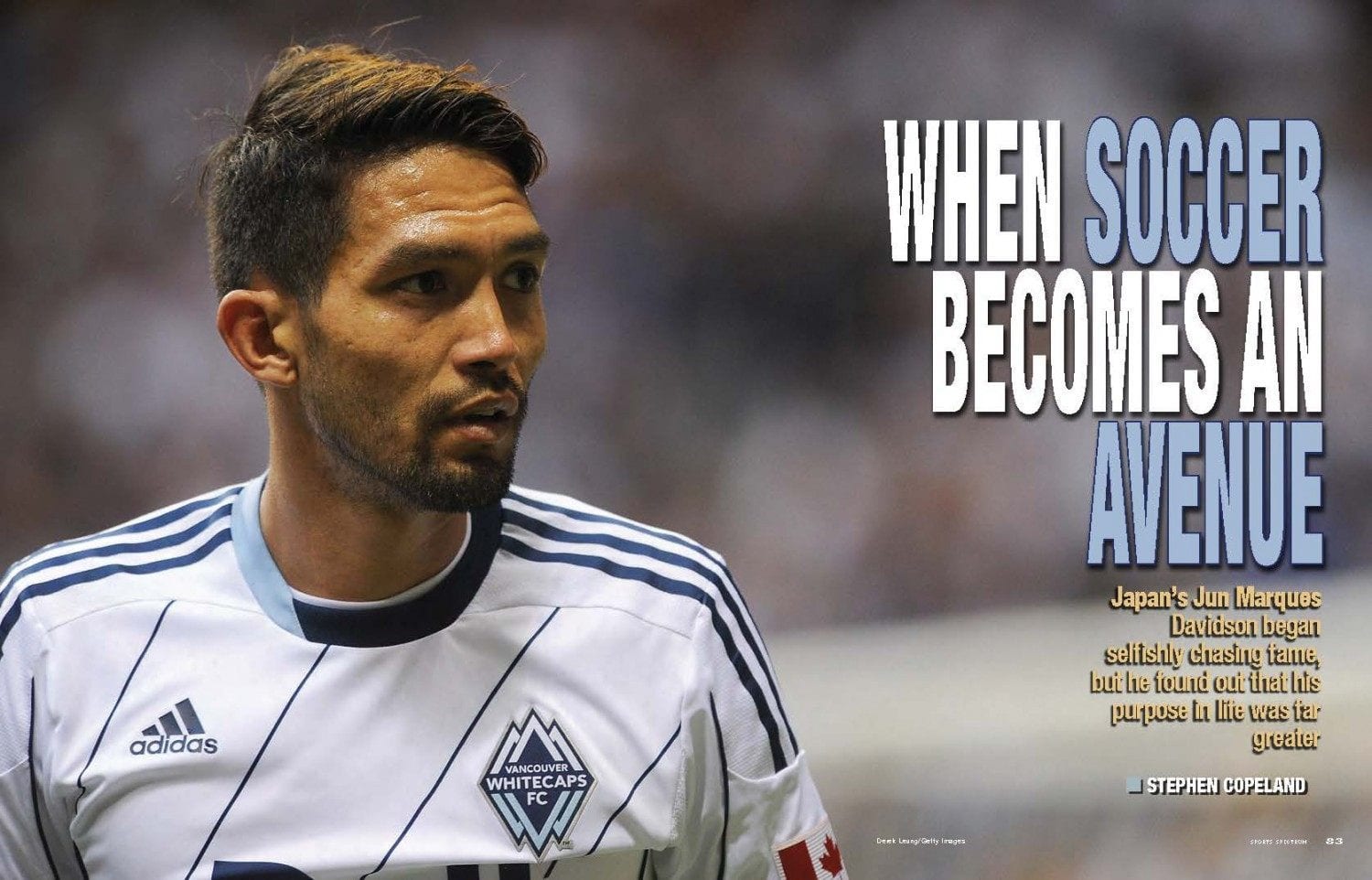 To Japanese footballer Jun Marques Davidson, religion always seemed like far too complicated of a thing. The rules. The regulations. The structure.

Raised in Tokyo, Japan—a country where only 1 percent of its citizens are considered to be practicing Christians—Davidson was like much of the population. He had little interest in Christianity, even though his mother was a Christian.

Instead, he had his sights set on one thing: soccer. There were signs that he could be something special early in life, and at 15 years old he left Japan to play soccer at an international school in England. Success, money, and fame became his primary drive in life. Attaining superstar status in the soccer sphere became his goal.

But it was in England, while he was alone in a foreign country, barely able to communicate, hardly knowing anyone, that he realized there may be more to life than soccer.

“It was tough to be alone in a foreign country,” Davidson said. “But it was there that I began to understand my need for God. I started attending church on my own and learned more about what it meant to be a Christian. I committed my life to Him and found a peace and confidence I had not felt before. My purpose for going to England had been for soccer, but His purpose was to shape me for my future.”

After England, Davidson and his family moved to California to be together while he played soccer in high school. He was surrounded by other strong Christians on the team, as if God was bringing him to maturation after the revival he had in England. “Again God was shaping me by providing Christian fellowship and encouragement,” Davidson says.

Following high school, Davidson moved back to Japan to play professional soccer. His homecoming was like a clash of two worlds. When he left Japan four years prior, his heart and mind were in a completely different state. He was selfishly driven, determined to make a splash on the soccer scene to attain both money and fame. When he returned four years later, he was becoming more of a selfless person, and he wanted to use soccer as an avenue to impact others for the Gospel in a country that had hardly heard of Jesus Christ.

“I think God created me as a soccer player to do something greater, to serve God,” Davidson told Risen Magazine. “There are not many Christians in Japan, so it is very hard to follow and study and have the solid faith in Christ. 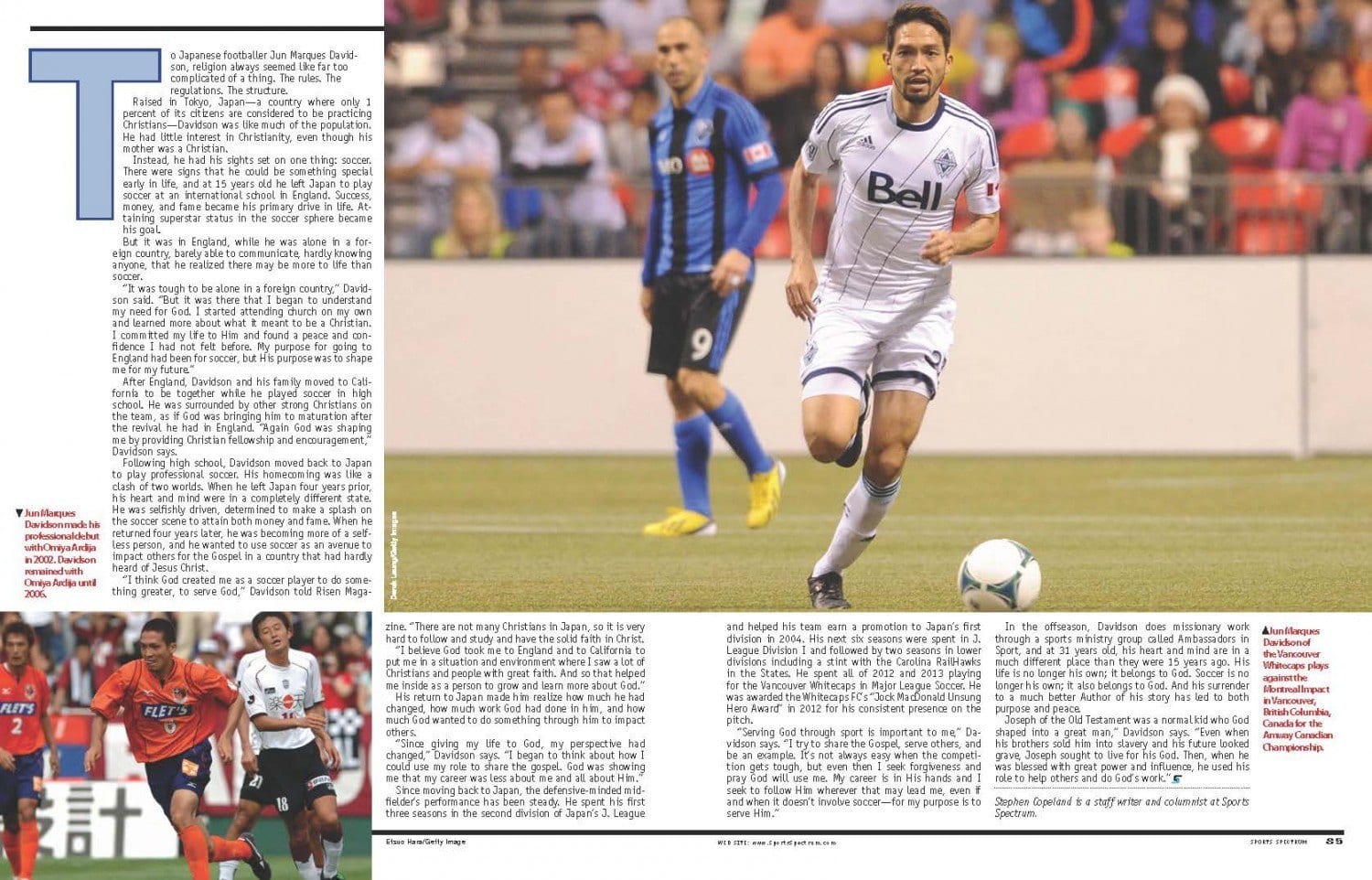 “I believe God took me to England and to California to put me in a situation and environment where I saw a lot of Christians and people with great faith. And so that helped me inside as a person to grow and learn more about God.”

His return to Japan made him realize how much he had changed, how much work God had done in him, and how much God wanted to do something through him to impact others.

“Since giving my life to God, my perspective had changed,” Davidson says. “I began to think about how I could use my role to share the gospel. God was showing me that my career was less about me and all about Him.”

Since moving back to Japan, the defensive-minded midfielder’s performance has been steady. He spent his first three seasons in the second division of Japan’s J. League and helped his team earn a promotion to Japan’s first division in 2004. His next six seasons were spent in J. League Division I and followed by two seasons in lower divisions including a stint with the Carolina RailHawks in the States. He spent all of 2012 and 2013 playing for the Vancouver Whitecaps in Major League Soccer. He was awarded the Whitecaps FC’s “Jock MacDonald Unsung Hero Award” in 2012 for his consistent presence on the pitch.

“Serving God through sport is important to me,” Davidson says. “I try to share the Gospel, serve others, and be an example. It’s not always easy when the competition gets tough, but even then I seek forgiveness and pray God will use me. My career is in His hands and I seek to follow Him wherever that may lead me, even if and when it doesn’t involve soccer—for my purpose is to serve Him.”

In the offseason, Davidson does missionary work through a sports ministry group called Ambassadors in Sport, and at 31 years old, his heart and mind are in a much different place than they were 15 years ago. His life is no longer his own; it belongs to God. Soccer is no longer his own; it also belongs to God. And his surrender to a much better Author of his story has led to both purpose and peace.

Joseph of the Old Testament was a normal kid who God shaped into a great man,” Davidson says. “Even when his brothers sold him into slavery and his future looked grave, Joseph sought to live for his God. Then, when he was blessed with great power and influence, he used his role to help others and do God’s work.”