Griffin on a Mission 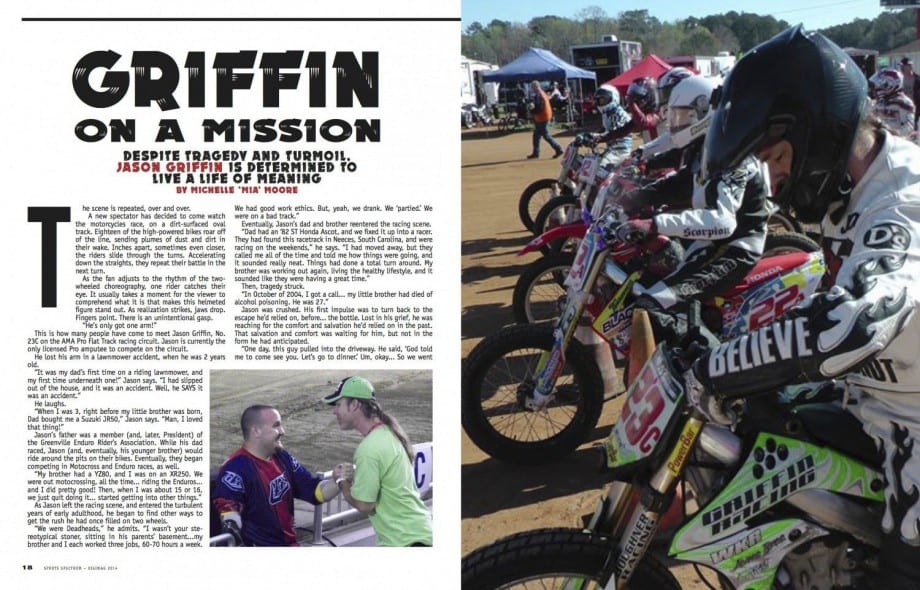 The scene is repeated, over and over.

A new spectator has decided to come watch the motorcycles race, on a dirt-surfaced oval track. Eighteen of the high-powered bikes roar off of the line, sending plumes of dust and dirt in their wake. Inches apart, sometimes even closer, the riders slide through the turns. Accelerating down the straights, they repeat their battle in the next turn.

As the fan adjusts to the rhythm of the two-wheeled choreography, one rider catches their eye. It usually takes a moment for the viewer to comprehend what it is that makes this helmeted figure stand out. As realization strikes, jaws drop. Fingers point. There is an unintentional gasp.

This is how many people have come to meet Jason Griffin, No. 23C on the AMA Pro Flat Track racing circuit. Jason is currently the only licensed Pro amputee to compete on the circuit.

He lost his arm in a lawnmower accident, when he was 2 years old.

“When I was 3, right before my little brother was born, Dad bought me a Suzuki JR50,” Jason says. “Man, I loved that thing!”

Jason’s father was a member (and, later, President) of the Greenville Enduro Rider’s Association. While his dad raced, Jason (and, eventually, his younger brother) would ride around the pits on their bikes. Eventually, they began competing in Motocross and Enduro races, as well.

“My brother had a YZ80, and I was on an XR250. We were out motocrossing, all the time… riding the Enduros… and I did pretty good! Then, when I was about 15 or 16, we just quit doing it… started getting into other things.”

As Jason left the racing scene, and entered the turbulent years of early adulthood, he began to find other ways to get the rush he had once filled on two wheels.

“We were Deadheads,” he admits. “I wasn’t your stereotypical stoner, sitting in his parents’ basement…my brother and I each worked three jobs, 60-70 hours a week. We had good work ethics. But, yeah, we drank. We ‘partied.’ We were on a bad track.”

“Dad had an ‘82 ST Honda Ascot, and we fixed it up into a racer. They had found this racetrack in Neeces, South Carolina, and were racing on the weekends,” he says. “I had moved away, but they called me all of the time and told me how things were going, and it sounded really neat. Things had done a total turn around. My brother was working out again, living the healthy lifestyle, and it sounded like they were having a great time.”

Jason was crushed. His first impulse was to turn back to the escape he’d relied on, before… the bottle. Lost in his grief, he was reaching for the comfort and salvation he’d relied on in the past. That salvation and comfort was waiting for him, but not in the form he had anticipated. 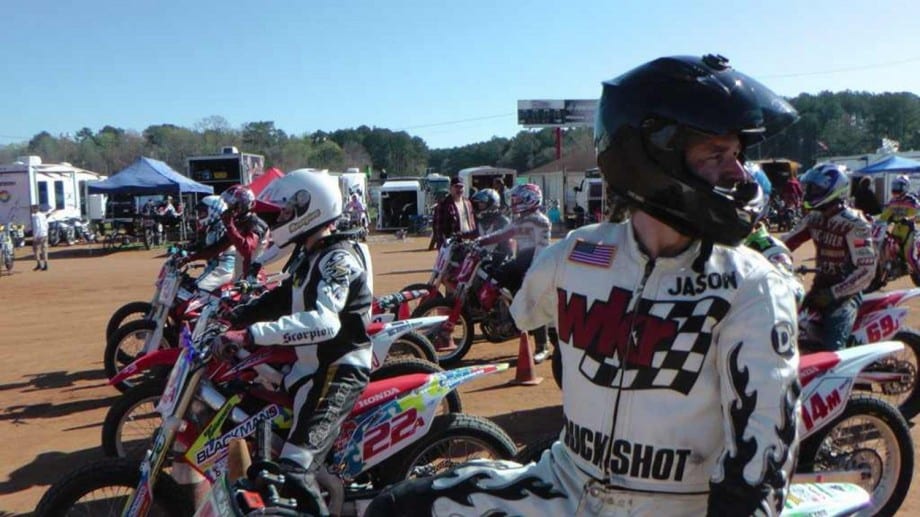 “One day, this guy pulled into the driveway. He said, ‘God told me to come see you. Let’s go to dinner.’ Um, okay… So we went to this Macaroni Grill. It was one of those places with crayons and paper on the tables, for the kids. We talked, and he said he wanted to pray for me. I asked God to take the drugs and alcohol away from me.

“The next day, it was like I had won the lottery. I couldn’t believe it! I felt it! I just KNEW it… God is REAL! I wanted to tell the world. It was as if a light switch came on, and I saw the world in a whole new way, like I had never seen it before! This is the REAL DEAL!”

Overnight, Jason’s world changed. He went to work for the man (a doctor), returned to school, and graduated with a Bachelor of Arts degree and two Master’s degrees. Still, he realized that his calling wasn’t in the medical field. There was something else he was meant to do.

His heart was being drawn back into racing.

He began researching online, to see how much a set of racing leathers (a one-piece bodysuit) would cost. The figures were far beyond his reach. However, he stumbled across a set on E-Bay, identical to the ones he was looking for.

“I put in a bid that I could afford. I believe it was $133.25. The auction was set to end in eight days, and I knew there was no way I would win with a bid that low. After eight days, I got the notification. The leathers were mine! They still had the tag on them, and everything!”

Jason acknowledges that some might consider that to be a coincidence, but he saw it as a sign.

“I started racing on my brother’s bike,” he says, “And it was incredible. If I didn’t wreck, I won!”

Along the way, Jason continued to find affirmations that he was on the right path.

“The first time I rode at Daytona, at the Municipal Stadium, I fell down,” he says. “I fell down, repeatedly. I was so sore, I couldn’t even get my leathers on. I was sitting there, sweating. I was sick from the pain. A man walked up to me and started a conversation. I told him I was sick. I said that I couldn’t race. He laid his hands on me, and we prayed… and the pain was gone! Just like that.

“And the Twins bike I ride? It was given to me to ride. The guy just gave it to me, told me to race it as long as I wanted, and give it back when I was done. That kind of thing doesn’t ‘just happen.’ I look at it as a sign… a gift, from God.”

Throughout his years on the dirt tracks of America, Jason has found many opportunities to share his testimony with others. Words of appreciation, hope, and encouragement fill the eager and listening ears of his fans:

“You need to do what God wants you to do. You’ll see, anything negative that ever happens, happens as the result of choices we make when we don’t listen!”

“Life is short. Eternity… that’s FOREVER. As we grow older, time goes faster. Too many people are living in the here and now, and that’s not what it’s about. You need to prepare, now.”

Despite his achievements, Jason says he doesn’t race for the trophies or the titles. “It’s all about the people,” he says. “Flat track is a tough discipline. It’s made of the best people, a true family. It’s one of the few sports where the top guys… the legends… are just as accessible as anyone else. Nobody’s in it to get rich or famous. We all help each other out. This sport is self-sustaining. It has only survived because of the love and dedication of the people involved in it.”

Jason isn’t seeking to put his name in the history books as a Grand Champion, but he does dream of getting his Expert Plates.

“I’ve gotten my points, and applied for my Expert number,” he says, “But I keep getting denied.”

While racing, Jason took online courses towards his next career field, and secured a position teaching Biology at Tri-County Technical College. He spent his winter racing motorcycles on ice, as part of the I.C.E. Nationals, and is very active in the SEMDTRA (Southeastern Motorcycle Dirt Track Racing Association). Recently, he began racing in the Paralympic Cycling events, claiming two silvers on his six-geared brakeless bike. If all goes well, he could earn a position on the US National team, in the 2016 Paralympics.

Wherever he ends up, one thing is for certain. He will continue touching hearts and reaching souls, everywhere God leads him.

Mia Moore is a freelance writer and photographer. She and her fiance, Kevin “Chew” Larcom, live in Central Ohio. They spend their weekends covering flat track motorcycles or working on their family homestead.”