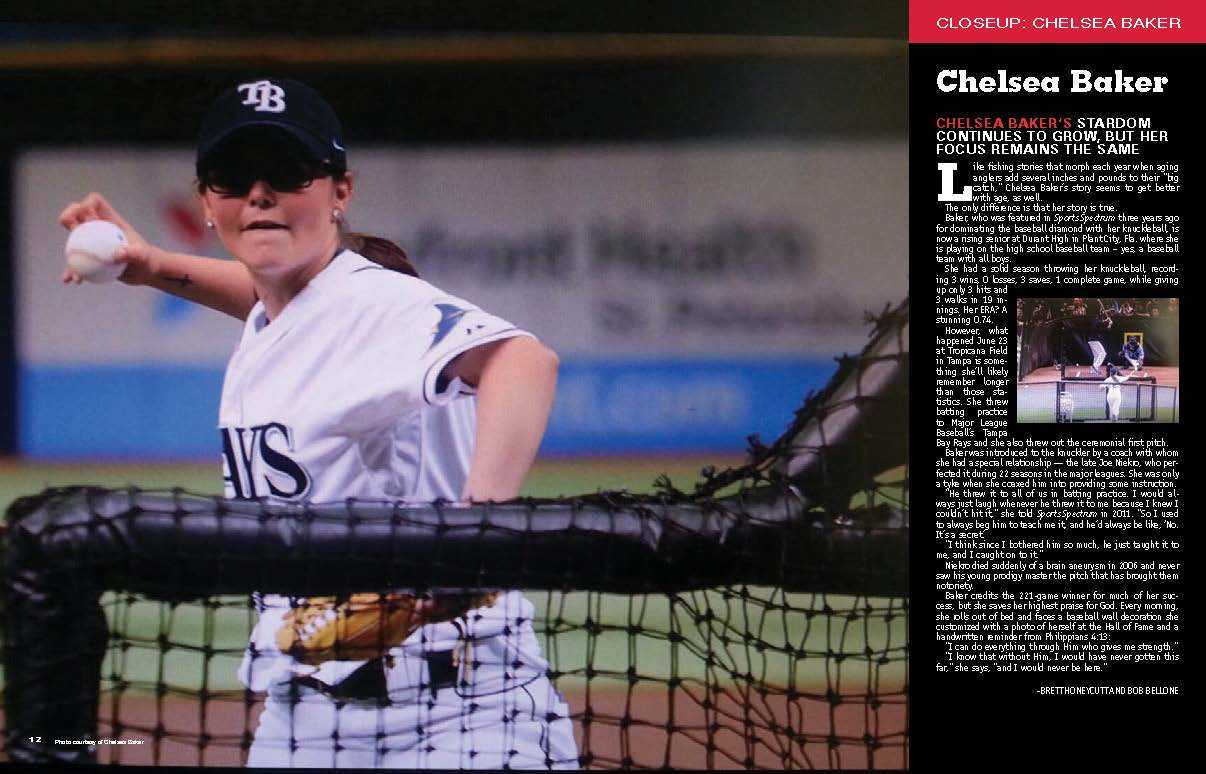 Like fishing stories that morph each year when aging
anglers add several inches and pounds to their “big
catch,” Chelsea Baker’s story seems to get better
with age, as well.

The only difference is that her story is true.

Baker, who was featured in Sports Spectrum three years ago
for dominating the baseball diamond with her knuckleball, is
now a rising senior at Durant High in Plant City, Fla. where she
is playing on the high school baseball team – yes, a baseball
team with all boys.

She had a solid season throwing her knuckleball, recording
3 wins, 0 losses, 3 saves, 1 complete game, while giving
up only 3 hits and 3 walks in 19 innings. Her ERA? A
stunning 0.74.

However, what happened June 23 at Tropicana Field in Tampa is
something she’ll likely remember longer than those statistics.
She threw batting practice to Major League Baseball’s Tampa
Bay Rays and she also threw out the ceremonial first pitch.

Baker was introduced to the knuckler by a coach with whom
she had a special relationship — the late Joe Niekro, who perfected
it during 22 seasons in the major leagues. She was only
a tyke when she coaxed him into providing some instruction.

“He threw it to all of us in batting practice. I would always
just laugh whenever he threw it to me because I knew I
couldn’t hit it,” she told Sports Spectrum in 2011. “So I used
to always beg him to teach me it, and he’d always be like, ‘No.
It’s a secret.’

“I think since I bothered him so much, he just taught it to
me, and I caught on to it.”
Niekro died suddenly of a brain aneurysm in 2006 and never
saw his young prodigy master the pitch that has brought them
notoriety.

Baker credits the 221-game winner for much of her success,
but she saves her highest praise for God. Every morning,
she rolls out of bed and faces a baseball wall decoration she
customized with a photo of herself at the Hall of Fame and a
handwritten reminder from Philippians 4:13:

“I can do everything through Him who gives me strength.”

“I know that without Him, I would have never gotten this
far,” she says, “and I would never be here.”

By Brett Honeycutt and Bob Bellone