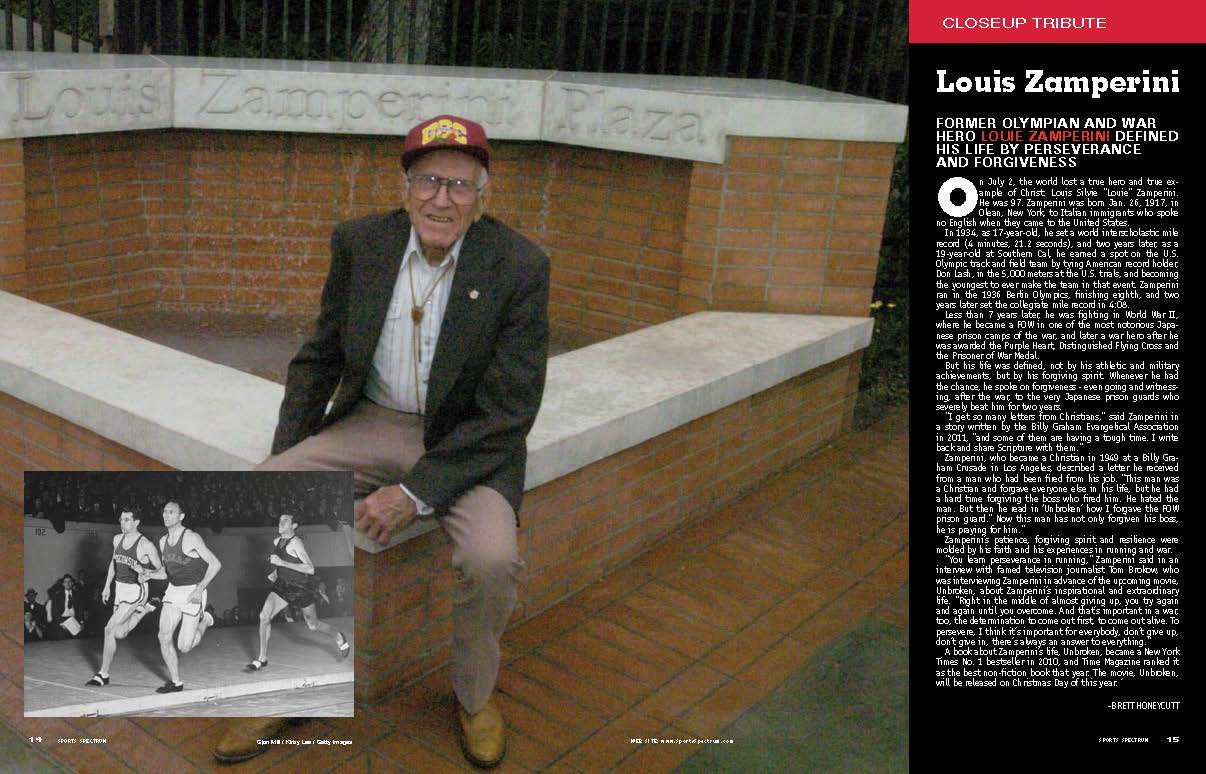 On July 2, the world lost a true hero and true example
of Christ: Louis Silvie “Louie” Zamperini.
He was 97. Zamperini was born Jan. 26, 1917, in
Olean, New York, to Italian immigrants who spoke
no English when they came to the United States.

In 1934, as 17-year-old, he set a world interscholastic mile
record (4 minutes, 21.2 seconds), and two years later, as a
19-year-old at Southern Cal, he earned a spot on the U.S.
Olympic track and field team by tying American record holder,
Don Lash, in the 5,000 meters at the U.S. trials, and becoming
the youngest to ever make the team in that event. Zamperini
ran in the 1936 Berlin Olympics, finishing eighth, and two
years later set the collegiate mile record in 4:08.

Less than 7 years later, he was fighting in World War II,
where he became a POW in one of the most notorious Japanese
prison camps of the war, and later a war hero after he
was awarded the Purple Heart, Distinguished Flying Cross and
the Prisoner of War Medal.

But his life was defined, not by his athletic and military
achievements, but by his forgiving spirit. Whenever he had
the chance, he spoke on forgiveness – even going and witnessing,
after the war, to the very Japanese prison guards who
severely beat him for two years.

“I get so many letters from Christians,” said Zamperini in
a story written by the Billy Graham Evangelical Association
in 2011, “and some of them are having a tough time. I write
back and share Scripture with them.”

Zamperini, who became a Christian in 1949 at a Billy Graham
Crusade in Los Angeles, described a letter he received
from a man who had been fired from his job. “This man was
a Christian and forgave everyone else in his life, but he had
a hard time forgiving the boss who fired him. He hated the
man. But then he read in ‘Unbroken’ how I forgave the POW
prison guard.” Now this man has not only forgiven his boss,
he is praying for him.”

Zamperini’s patience, forgiving spirit and resilience were
molded by his faith and his experiences in running and war.

“You learn perseverance in running,” Zamperini said in an
interview with famed television journalist Tom Brokow, who
was interviewing Zamperini in advance of the upcoming movie,
Unbroken, about Zamperini’s inspirational and extraordinary
life. “Right in the middle of almost giving up, you try again
and again until you overcome. And that’s important in a war,
too, the determination to come out first, to come out alive. To
persevere, I think it’s important for everybody, don’t give up,
don’t give in, there’s always an answer to everything.”

A book about Zamperini’s life, Unbroken, became a New York
Times No. 1 bestseller in 2010, and Time Magazine ranked it
as the best non-fiction book that year. The movie, Unbroken,
will be released on Christmas Day of this year. ’