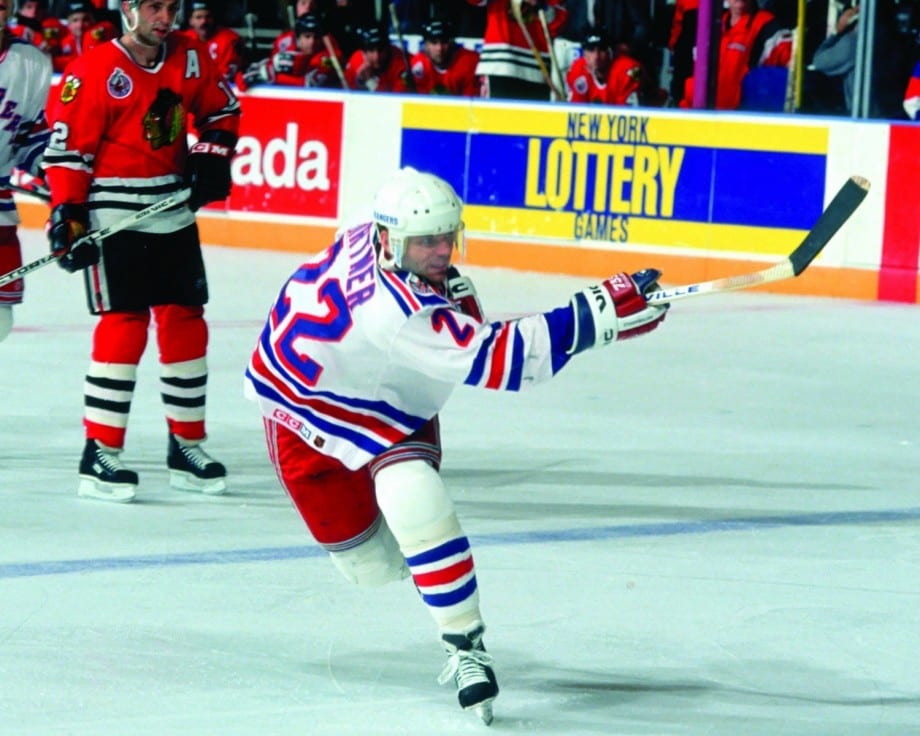 Just after he became a Christian, he was hit in the eye with a hockey puck and lost his vision in one eye. The doctors said they didn’t know whether he would regain his vision.

“I remember praying as a very young Christian that if God wants me to continue to play hockey, obviously my vision’s going to get better, because right now I can’t play very well. If that’s what the plan is, I guess I’m ready to continue on and see what new challenges You have for me,” says Gartner, who appeared in the first issue of Sports Spectrum in 1985 when it was called Sports Focus and recently spoke with Sports Spectrum to commemorate the magazine’s 30th anniversary. “My eye kind of stabilized, and over the next two or three months it got better and better where I was able to continue to play and went on to have a good NHL career. But that was a very difficult time for both my wife and I as we were young in our marriage, young in our lives, and young in our faith.”

Gartner went on to play for 20 years, represent Canada on the 1987 World Cup team, considered by some to be the greatest Canadian hockey team ever assembled, serve as president of the NHL Players Association, and be inducted into the Hockey Hall of Fame in 2001.

A few years before he retired, he started National Training Rinks, which now operates three hockey rinks year-round in Canada, and served with the NHL Players Association for about eight years after retirement. He currently sits on the NHL Alumni Association’s Board of Directors, is one of 18 people who serve on the Board Selection Committee for the Hockey Hall of Fame, and for the past 10 years has been on the board for World Vision Canada, the largest Christian relief and humanitarian organizations in Canada and one of the largest in the world.

A lot has happened since 1985, when Gartner appeared in the first issue of Sports Spectrum.

The irony of his life events, though, wasn’t lost on Gartner.

“You think back in 1984 or 1985 when this issue that we’re talking about came out, I was a new father at that time,” says Gartner, who celebrated 33 years of marriage this past summer with his wife, Colleen, who he has three children with—Josh, Dylan and Natalie. “And ironically, on Dec. 23 of this past year, 2013, I became a grandfather. My wife and I had our first grandson, Logan, born to our oldest son, Josh, and his wife, Maureen.”

Gartner coached all three of his children in hockey, coaching his younger son for about 12 years.

“I loved doing that,” he says. “I figured I was going to be there anyway taking them to all the practices and games so I might as well coach. So, it was very enjoyable. I look back fondly on those memories…We just felt it was a great way to spend time with our kids, and at the same time, for me as a coach, I had a huge input in the environment that our kids were being in, as well as all the other players on the team. So I was able, as the coach, to set the tone on what the environment was like, which is important from my perspective.”

Though his children are older and he hasn’t coached in several years, he is still focused on setting the tone of his family’s environment to strengthen their faith, which has carried them since just after the high school sweethearts married when Mike was 21 and Colleen was 19.

Part of setting the tone was purposefully being involved with believers in their community and church.

“That makes all the difference in the world,” says Gartner. “The guys that struggle the most are guys that don’t have a lot of their life happening outside hockey, or outside their sport. And that becomes very difficult because everybody moves on….But we had planted a lot of stakes outside the game, and because of that I think the transition was that much easier.”

Another part was to make sure that his personal walk with God was consistent.

“I kind of approach my faith in many ways, the same as I would playing hockey or doing anything that you want to succeed at or excel at,” says Mike Gartner, who became a Christian in 1981 when a teammate, Jean Pronovost, led him to Christ by living out his faith in front of Gartner each day. “And it takes practice. I couldn’t just show up in September for training camp and have done nothing all summer long and expect to be anywhere close to the level I needed to be to play in the National Hockey League. The exact same is with my faith, is that I try to have a daily time of devotion, certainly reading the Bible. I try to do a reading program every year…I think for about the 30-some time of reading through the Bible. And it doesn’t mean that you’re going to do it every day, and I do miss some days, but I catch up and try to have a daily time of reading God’s Word and a time of prayer.”