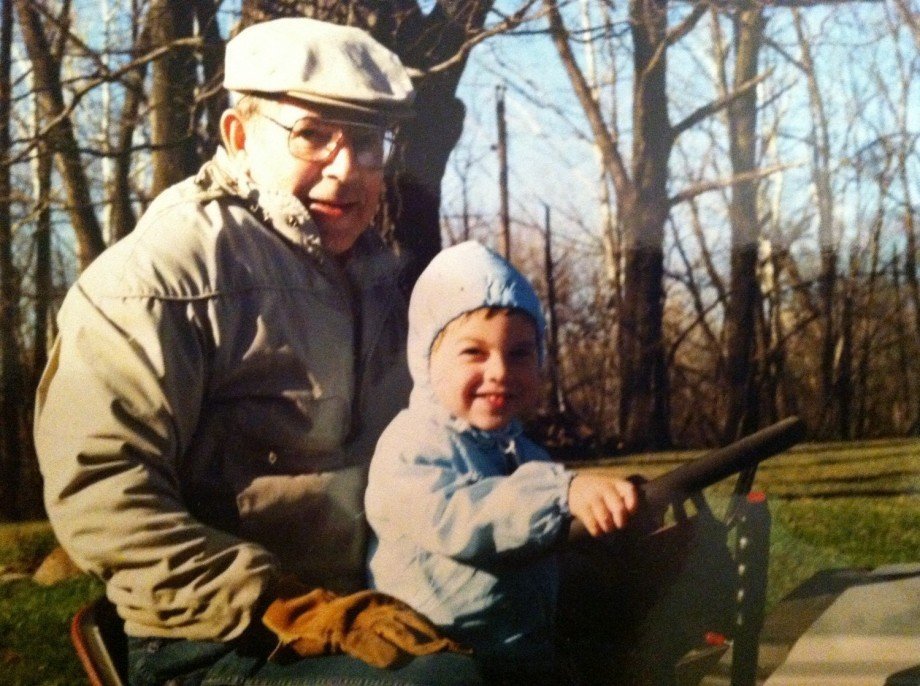 We were never ones to have serious conversations, were we? We liked arguing about sports and giving each other a hard time. We were expert jokesters and pranksters. You’d kid with me that I couldn’t possibly be a diehard Indiana Hoosier fan because I was born in Kentucky—my deepest, darkest secret.

“The nearest hospital was in Louisville across the river and Indiana border!” I’d exclaim.

It didn’t matter. I had committed the unpardonable sin. Of birth.

Some of my fondest memories involve watching college basketball with you during the holidays. We’d relax in the basement as Grandma brought us food and refilled our glasses with Coca-Cola, you in your cloth, navy recliner, and me in my beige, leather recliner. We had everything we needed. Food. Drink. Basketball. And one another. I’m sure we went weekends without even leaving the basement.

No matter what game we watched, you always ended up talking about Bob Knight. He was your hero and borderline obsession. You read all his books, and you could even quote them. After several years of listening to you (and watching the Hoosiers fall apart under two separate coaches), Bob Knight became one of my favorite coaches, too. I have you to thank for that.

You were in a hospital in Indianapolis dealing with an array of heart complications, and I was down in Charlotte; it was a Wednesday and I was working.

I walked outside to call you, and a routine southern, afternoon shower was swinging through the south. I took cover beneath an overhang and dialed your number. When you picked up the phone, your voice was weak—the weakest I’d ever heard you. Helpless moments like these, I admit, make me wonder if leaving Indiana three years prior was worth it. Even for a job I love—could it ever provide more joy than being around people I love?

“Papaw,” I eventually said, “I want to tell you something.”

“I just want you to know that it’s looking like I am going to be helping the Zeller family write a book.”

I knew you were familiar with the Zellers because of your love for Indiana hoops. As you know, Luke, Tyler and Cody all won the esteemed Indiana Mr. Basketball award, went on to play at NCAA Division I universities, and earned NBA contracts. Their parents, Steve and Lorri, are remarkable people who, like you, are passionate about family and integrity.

“It’s going to be a book about parenting,” I continued, “and I just want you to know that I am going to work on it for you. Anyone who gave me someone like my mom had to have been an amazing parent. And you’re an amazing grandpa.”

You are special. Three words that God says to us each and every day. In your weakest moments, you were preaching to me the gospel.

We were never ones to have serious conversations, but the last conversation I ever had with you is one I’ll forever remember. The next day, you passed away and stepped into glory.

In your eulogy a few days later, I mentioned that, though you might never be able to read the book, I knew that, in a way, you would be able to—because you’d be with me every step of the way.

That was a year and a half ago, and I cannot believe all that has happened since. I started working on another project with a former college basketball coach named Dave Bliss, who was one of Bob Knight’s assistants at West Point and Indiana. He knew Knight as well as anyone. When Coach Bliss showed me his ’73, ’74 and ’75 Big Ten Championship rings that he won with Knight, all I could do was think of you. I wished I could show them to you. I wanted to take them in my palm and sling them into the air as high as I could toward the heavens. Coach Bliss, honestly, probably wouldn’t have cared—but I would have felt a little insane.

As for the Zellers’ book, it’s done, Papaw. Bob Hammel, one of Bob Knight’s best friends who wrote several of Knight’s books, edited the book and wrote the foreword. What are the chances? I actually remember that one of the last books I saw you reading was The Power of Negative Thinking by Knight and Hammel.

Like the Zellers, you valued faith and family. If you had lasted three more weeks on this earth, you would have celebrated your 54th anniversary with Grandma. Fifty-four years! It’s hard for me to be in a relationship lasting more than 54 weeks. In a twisted, sex-saturated society where we have websites and businesses that help you cheat on your wife, you did things the right way—from the way you loved your wife, to your four children, to your nine grandchildren.

We might have always joked around and given each other a hard time, but each and every day, I’m inspired by the way you lived. And also the way you loved.

I guess I wanted to write you this letter to fill you in. Both books will be out in the spring, and part of me wishes I could have worked on them forever—because each time I sat down to write, I was reminded of you. Thank you for making me feel special.

Your grandson
(the one from Kentucky)

This story was published in Sports Spectrum’s Winter 2014 DigiMag #2 (Vol. 29, No. 1 in print). Log in HERE to view the issue or subscribe HERE to receive 12 issues of Sports Spectrum a year.