Airing It Out: Which way does the ball bounce? 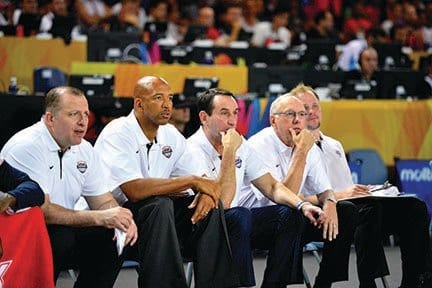 What would you do if you had the ability and power to share your faith without consequence?

Would you acquiesce to one person who didn’t believe and therefore not share your faith, or would you honor God by sharing with everyone regardless of whether they were accepting of your faith or not, so that anyone could know the Christ who sets us free from our sins?

That scenario actually happened last year in the NBA. One coach, who is also a pastor, prayed with his team. Another coach, who says he’s a Christian but readily admitted he hadn’t been to church in 16 years except for funerals, says he no longer allowed pre-game team prayers or post-game prayers with other teams because he says faith is a private matter and because he noticed a player of another faith had been uncomfortable.

It made me ask several questions:

Who do we respect more, God or man?

The very God, who became man and suffered ridicule, abuse, and a brutal death so that we could know Him, be reconnected with Him spiritually (like when Adam and Eve walked with Him in the garden), and then eventually spend eternity with Him in Heaven.

The same man, who was made by God, yet ridicules people of faith for believing that God created the world, offers eternal life and became man and died for us.

Paul mentions pleasing God and not man again in I Thessalonians 2:4, even mentioning in verse 2 that he shared the gospel “in the face of strong opposition.”

Is it faith at all if the faith one claims isn’t lived out?

The coach who prayed with his team prayed unashamedly with believers and non-believers alike. He took the team to church and encouraged them to go to team chapel.

The other coach, who didn’t go to church any longer, stopped pre-game prayer, wouldn’t allow his players to have chapel with another team because he didn’t like the other team (interestingly, the team led by the other coach in this story).

From this, several things jump out about each of these coach’s lives.

The first is that one attends church and the other doesn’t (quickly admitting he didn’t).

Paul clears this up when he says in Hebrews 10:24-25, “and let us consider one another to provoke unto love and to good works, not forsaking the assembling of ourselves together, as is the manner of some, but exhorting one another, and so much the more as ye see the Day approaching.”

What a person does or doesn’t do, speaks volumes.

Third, it made me think of what the Bible tells us about sharing our faith.

In the first chapter of Romans, Paul is clear about sharing our faith when he says in 1:14-17: “I am obligated both to Greeks and non-Greeks, both to the wise and the foolish. That is why I am so eager to preach the gospel also to you who are in Rome. For I am not ashamed of the gospel, because it is the power of God that brings salvation to everyone who believes: first to the Jew, then to the Gentile. For in the gospel the righteousness of God is revealed—a righteousness that is by faith from first to last, just as it is written: ‘The righteous will live by faith.’”

Which coach are you? The one who lives out what the Bible says, or the one who doesn’t?

This column is taken from Sports Spectrum’s Spring 2015 print issue. Log in HERE to view the issue. Not a subscriber? Subscribe HERE to receive eight issues of Sports Spectrum a year.