Where Are They Now Closeup: Hall of Famer Jackie Slater waited on God's timing in coaching career

By Brett Honeycutt Dec 1, 2015
ANAHEIM, CA - OCTOBER 4: Jackie Slater #78 of the Los Angeles Rams gets into position during a NFL game against the Atlanta Falcons at Anaheim Stadium on October 4, 1994 in Anaheim, California. The Falcons defeated the Rams 8-5. (Photo by Al Bello/Getty Images) 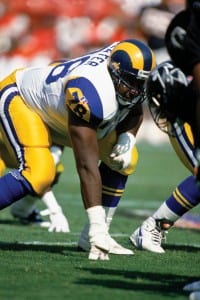 Jackie Slater coaches with the same intensity that helped him become a Pro Football Hall of Fame offensive tackle.

In practice, he constantly barks instructions to Azusa Pacific University’s offensive linemen, holding them to the same standards of effort and precision that he had for himself during 20 NFL seasons with the Los Angeles and St. Louis Rams (1976-95).

Jackie’s determination and expertise as an assistant coach has helped Azusa Pacific—an evangelical Christian school located near Los Angeles—compile a 20-3 record the past two seasons on the NCAA Division II level.

In four years at the up-and-coming program, he has produced two offensive linemen who were signed to NFL free agent rookie contracts. 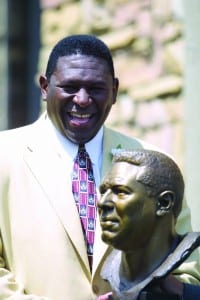 Jackie was inducted into the Hall of Fame in 2001—his first year of eligibility—after being a seven-time Pro Bowler with the Rams. He blocked for two of the game’s most legendary running backs, Walter Payton in college at Jackson State and Eric Dickerson with the Rams.

Jackie’s coaching success at Azusa Pacific has helped soothe the pain of an inauspicious start to his coaching career with the NFL’s Oakland Raiders just nine years prior.

Then-Raiders coach Art Shell hired him to be the team’s co-offensive line coach, but Jackie’s tenure there lasted one year. Without any prior coaching experience, he suffered through a 2-14 season in which the Raiders gave up an NFL-high (and franchise record) 72 quarterback sacks.

“For me, that whole experience was a crucible,” Jackie says. “That’s a time in a person’s life when they deal with their failures and their flaws, their imperfections, and they have to make a decision as to how to deal with it. You’ll either crumble…or you’ll stand up and, with God’s help, move forward with hopes of a brighter future.”

Jackie spent three of the next four years coaching either in high school or junior college before Azusa Pacific head coach Victor Santa Cruz called in 2011 and offered him a job coaching the Cougars’ offensive line.

Slater is inspired that his position allows him to help his players grow in the Lord.

“I’ve seen the graduation of four classes of men who are going to be warrior guys for their families, and they’re going to do the right things for their communities,” he says.

“It’s been a blessing to watch. To think that I’m having a part in it is very, very humbling.”

Jackie also has invested in his own personal growth while at Azusa Pacific, enrolling in graduate school and earning a Master of Arts degree in leadership.

As for a possible return to coaching in the NFL and a chance for redemption on the pro level, Jackie says he hasn’t let himself think that far ahead. His life experiences have taught him to wait until God reveals a new game plan.

“I don’t believe anything happens that isn’t first ordained by Him.”