What Christians can learn from Kobe and Peyton

“He’s probably the hardest-working guy I’ve been around who has great ability. Overachievers work hard because they have to. Peyton has rare talent, but chooses to push himself like he doesn’t.” —Tony Dungy

“We’re in Las Vegas and we all come down for team breakfast at the start of the whole training camp. And Kobe comes in with ice on his knees and with his trainers and stuff. He’s got sweat drenched through his workout gear. And I’m like, ‘It’s 8 o’clock in the morning, man.” —Chris Bosh

In 2016 the sporting world has seen two of the greatest athletes of all-time, Peyton Manning and Kobe Bryant, retire from their respective sports.

Both Manning (the two-time Super Bowl champion and the NFL’s all-time leader in touchdown passes, passing yards and wins) and Bryant (the five-time NBA champion and 18-time NBA All-Star) are praised for their relentless work ethic and love for their sports. Both have been described as perfectionists. Countless stories recount Bryant’s vigorous and lengthy training sessions and Manning’s rigorous study habits. It didn’t matter that they sat atop their professions, that they were faces of their leagues, that their names were already etched in history and compared to the all-time greats. They believed that, until they retired, their crafts needed to evolve. In their minds, there was always room for improvement. They were dedicated to the process; never did they believe that they had arrived. 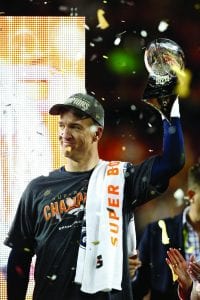 All is a journey of never arriving—this is the mindset when the framework for your life begins with the miraculous, with mystery. Nothing can be fully understood. But all can be discovered. In this discovery, we find untapped potential within ourselves and knowledge and beauty in the world that we were previously blind to—ideas and truths that can help us live our lives to the fullest. This is why the greats never arrive. They believe that there is always something that they can discover within; and they believe there is always someone else (or something else) who (or that) they can learn from. They are constantly proceeding deeper down the route of improvement and awareness, never arriving at their destination.

What I find most interesting about all of this is that most of the Christians I know do not start from the foundation of mystery. Franciscan friar and bestselling author Richard Rohr writes this in his book The Naked Now: Learning to See as the Mystics See: “It is a humorous paradox that in a faith that speaks about the ‘journey’ of following Jesus, Christians claim to have total and absolute truth from the beginning, while scientists, who are supposedly largely atheists and agnostics, are quite willing to work for decades knowing that their theories and hypotheses are merely provisional.”

Just the other day I was sitting in a small discussion group at church and there was a man attempting to corner one of the co-pastors with a question along the lines of: “Do you believe that the Bible is where we find God’s absolute truth?” The pastor handled the question delicately and gracefully, but the very nature of the question bothered me. However, it reflected a dominant theme in Westernized Christianity. Writes Rohr: “For far too many people, no life journey is necessary because we think we already have all our answers at the beginning. ‘The church says,…the Bible says, etc.’”

Even if God wrote the Bible, word by word, with His very own hand (which wasn’t the case, by the way), do we really think in our arrogance that we could possibly fully understand what the Creator of the entire universe meant to its capacity? Not that we shouldn’t try to understand, but isn’t it facetious and unbelievably ignorant to believe that we remotely can? I wanted to ask the man in the church group, “Do you believe that God is bigger than the Bible?” Because if He is, then our very framework whenever we read the Bible should be one of unknowing. Also, if the purpose of Jesus taking on humanity was to communicate God’s absolute truth to the people of that period, then Jesus—in raising questions and predominantly speaking in parables—was not a good communicator. Rather, Jesus welcomes us into a journey of awakening more and more to who we already are, which is a mystery in itself, one that can reveal itself in all kinds of different ways.

It was from the framework of unknowing, curiosity, and hunger that made Kobe Bryant and Peyton Manning so great at the sports they played. They knew that their pursuit of excellence was a journey of never arriving. There was always more to gain.

May we apply these same ideas in our spirituality. The more we learn, the less we know, but the freer we feel. Because we are engaging in Mystery itself.

This column was published in Sports Spectrum’s Spring 2016 print magazine. Log in HERE to view the issue. Subscribe HERE to receive eight issues of Sports Spectrum per year.