For most athletes who ascend to the top of their sport, it would be easy for them to assume their purpose on Earth was to be the best at that particular discipline.

Brown, a senior at the University of Tennessee is the top-ranked 200-meter runner in the NCAA. She is coming off a spectacular indoor track season when she won the SEC (Feb. 27) and NCAA Division I (March 12) indoor track and field championships and ran the third-fastest time (22.45 seconds) in NCAA history. 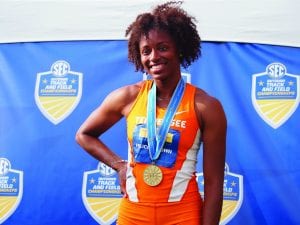 She hasn’t trailed off during the outdoor track and field season.

Her time of 22.55 in the 200 meters at the Seminole Invitational on April 16 leads the nation, and she helped Tennessee’s 4×200-meter relay win the 122nd Penn Relays, the oldest, largest and most prestigious relay meet in the world. She anchored the quartet of Lenysse Dyer, Kali Davis-White and Felecia Majors to the victory in Philadelphia on April 30, when they ran 1 minute, 31.84 seconds for the third-fastest time in school history.

Brown’s purpose, though, may take some by surprise.

“I know why God sent me on this Earth,” Brown told the U.S Track and Field and Cross Country Association (USTFCCA). “It’s to worship His name through track.”

Her revelation of why she’s here came at a crucial time-the beginning of this school year during an Athletes in Action meeting with other University of Tennessee athletes. Athletes in Action, a Christian sports organization, has helped mentor and shepherd thousands of athletes since its founding in 1966.

“Every week other athletes share their testimony and I realized sport isn’t about them: It’s about God,” Brown told USTFCCA. “If they figured that out and He could speak to them that way, I just had to listen. We all compete for a reason, and now mine is to praise Him with each step.”

This story was published in Sports Spectrum’s Spring 2016 print magazine. Log in HERE to view the issue. Subscribe HERE to receive eight issues of Sports Spectrum a year.