ON A MISSION: Living Water to Haiti

Located in the center of the Caribbean is the beautiful island of Haiti. In the entire western hemisphere there may not be another nation that has experienced as much calamity. From cannibalism to the tyrannical colonial rules of both the Spanish then the French, then coming into the internal strife of self-governance. If that weren’t enough, Haiti also seems to attracts natural disasters and epidemics.

Since the 1980’s, Haiti has had the highest percentage of HIV/AIDS-positive residents in the Caribbean. There are currently 130,000 people living with HIV (World Health Organization data, 2015); that’s 1.7% of the population, and the epidemic continues to have its way with Haiti, amplified by many socio-cultural realities including poor access to adequate health care, gender-based violence, and superstition.

In 2010, this small country famously experienced a catastrophic 7.0 earthquake (USGS) that killed 220,000 people and affected around one-and-a-half million (OXFAM). Layering misery atop misery, the cholera outbreak that followed killed another 10,000 people.

This distressed nation had still not recovered from the aftermath of the quake when it was again devastated on October 4th, 2016; this time by Hurricane Matthew’s 145-MPH winds and torrential rain. The hurricane swept across the island resulting in an estimated 1,000 deaths and leaving over 60,000 homeless.

Many individuals and organizations have been working to bring relief to the crippled nation, including former MLB pitcher Scott Linebrink. Currently the Stewardship Coordinator for Water Mission, Scott and the Water Mission team seek to bring additional clean water to the 1.4 million Haitians who are newly in need of emergency aid.

“We are not looking for a quick fix,” Scott said flatly. “We want to help the people of Haiti in a permanent way—giving them something that they can’t get themselves. We bring in the supplies and resources to give the Haitian people safe water and proper sanitation, while teaching and empowering them to sustain these resources for themselves. That’s the way we always operate; we hire local people and train them to help themselves and their people so they aren’t dependent upon us and at a loss when we leave.”

But before they hit the ground running, the team at Water Mission never fails to get on their knees first.

“The first thing Water Mission does when we hear of a tragedy like this is pray,” said Sandy Funk, Water Missions’ Director of Marketing and Public Relations. “We pray individually and collectively for God’s guidance to help us know what steps need to be taken and how we are to take them.”

Water Mission has been building safe water solutions in Haiti since before the earthquake. These state-of-the-art, self-contained water systems can pump ten thousand gallons of water each day; they are more akin to the municipal water systems in the US and other wealthy countries than to simple wellheads.

“These water systems filter and chlorinate the local water, providing water that is just as clean as any you’d find in the US,” Scott adds.

Before Hurricane Matthew hit, Water Mission had already set up seventeen systems for clean water, throughout the communities in Haiti. And with fifty employees based there, Water Mission was able to react quickly and implement a plan only hours after the hurricane passed. 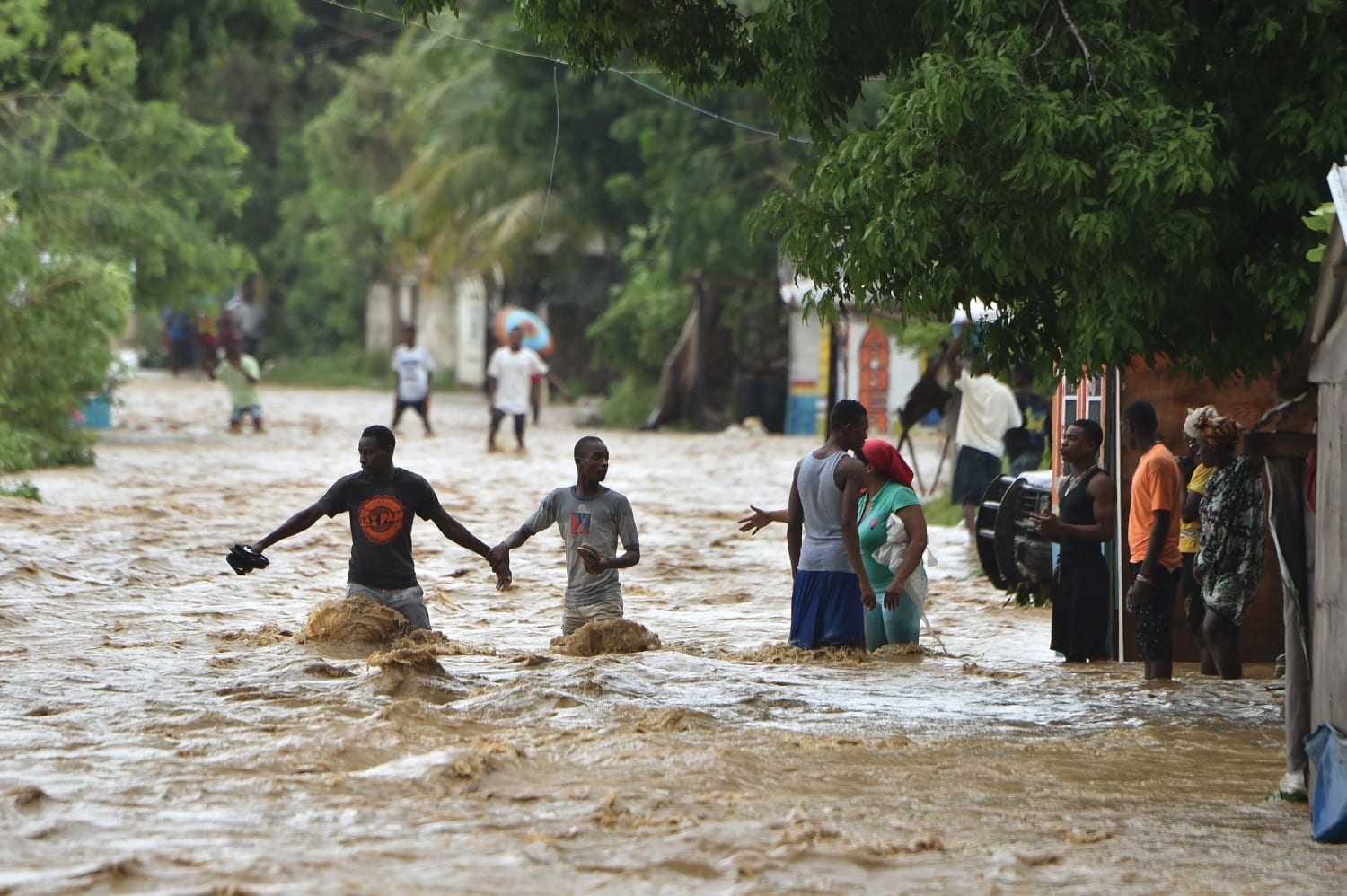 “Roads were impassable into many of the areas where we needed to go,” Scott reflected, “but with indigenous staff in Haiti, who know the lay of the land and alternative ways to get to the villages, we were able to get through.”

From Water Mission’s Emergency Response Coordinator Craig Williams helps to develop and orchestrate relief implementation plans for all the systems Water Mission builds. Despite having previously been in countless disaster-relief scenarios, upon arriving onsite Craig was struck hard by the magnitude of the chaos surrounding him.

“Just outside of Les Cayes [one of the critical regions Water Mission is serving] we saw the flooded river that had completely hidden the road from view for several kilometers,” Craig shared. “You could see families standing knee deep in the houses and churches where water was halfway up the door frames…and most of these same buildings had lost their roofs to Hurricane Matthew.”

While many organizations are providing relief work in Haiti, long-term problems are not always addressed. Water Mission is going in to meet the very basic need for something people simply cannot live without. Having raised close to $1M in commitments within the first month, they continue to reach out to partners, sponsors, and individuals to help them reach the hundreds of thousands of souls who had little hope before Matthew, and even less after.

Baltimore Orioles catcher Matt Wieters also caught the vision and heart behind what Water Mission was doing and came alongside them in their efforts.

“When I first heard about Water Mission last year, I asked Scott Linebrink to keep me informed of anywhere they saw a need arising,” Matt expressed. “He contacted me shortly after the storm hit, and immediately my wife and I jumped in to help fund the relief efforts.”

The adversity doesn’t end when the rain does. Even more problematic than the flooded land is the spread of disease that is sweeping through the country as a result.

“Cholera is the biggest issue right now in Haiti,” Scott said heavily. “It has the potential to kill an exponentially greater number of people than the hurricane already has. There have already been over 200 suspected new cases of cholera since day zero. The water runs through the streets, full of sewage and pollutants. You can’t get away from it. When people drink this contaminated water, they develop cholera, which can kill them in less than 24 hours. The only way to avoid that pandemic is for the people to drink safe water.”

Water Mission has been working tirelessly to provide this water to these people in need.

“Conditions are still deplorable,” Sandy said with obvious sadness, “but our team and partners are getting the systems up and running as fast as we can.”

Within three weeks of Matthew’s departure, Water Mission shipped 25 additional systems to Haiti, each one of which has the ability to provide safe water for 4,000 people. 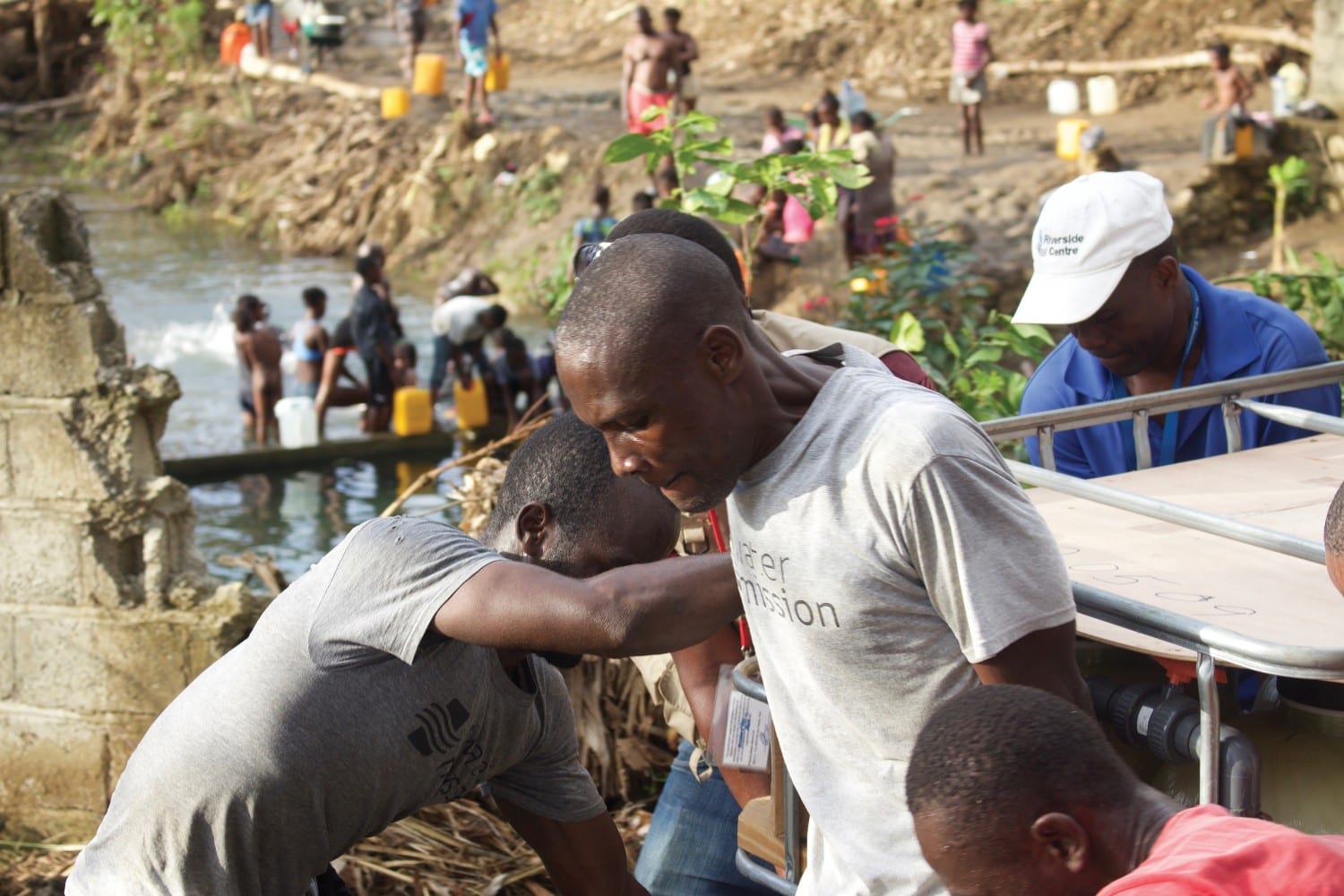 “Our water solutions are not a total fix to Haiti’s problems, but they represent one key element in helping reduce the spread of disease, which will bring kids back to school,” said Craig with fixed determination. “It offers hope; that from this destruction, a silver lining emerges that we have the ability to build it back better than before.”

Safe water brings a reason for hope to people who have been stripped of hope by the destruction and the filthy water left in its wake.  But the team at Water Mission are even more concerned about people’s eternal welfare.

“We want to meet people where they’re at,” Scott explained, “which is exactly what Jesus did. Jesus went to those who were hurting and healed them, and then offered them an even greater healing—a spiritual healing. We get to be the hands and feet of Jesus to people who are hurting, providing a very basic need for them. We’re often asked, ‘Why are you doing this for us?’ That is when we can share the love of Jesus Christ with them.”

The outward healing leads to a much greater inward healing, fulfilling the needs of souls who are thirsting for hope.

“I cannot imagine living life without clean drinking water,” Matt Wieters said. “Neither can I imagine never having heard the Gospel—not knowing the hope we have in Jesus. That is why I wanted to partner with Water Mission.”

To learn more about what Water Mission is doing in Haiti, you can visit them at watermission.org.