Tebowmania is coming to South Carolina.

Tim Tebow’s venture into professional baseball will continue this season in Columbia, South Carolina with the Columbia Fireflies, the Mets’ Class-A affiliate in the South Atlantic League.

The Mets and their staff made the news official today. Tebow will play every day in Columbia as he attempts to transition from NFL quarterback to pro baseball outfielder.

“Sending him to a full season club is what we hoped to be able to do,” Mets general manager Sandy Alderson told Newsday. “And based on what he’s done in spring training, and his whole body of work since last fall, we feel comfortable with him going to Columbia.” 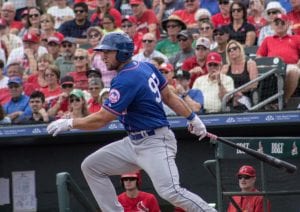 The 29-year-old left-hander has 4 hits in his 17 spring training at bats through March 20 with New York and thus far, management seems pleased at his progress. “We were concerned that it might be a stretch at some point, or could be a stretch,” Alderson told Newsday. “But what he’s done in spring training has convinced us that this is where he should go. And he’s prepared for it.”

Tebow hasn’t played baseball since high school but despite the naysayers, he believes he can do this and be successful at it. “I am just focused on what I can control and try to get better every single day. I just want to enjoy the process, enjoy every day and have fun out there.”

“Tim Tebow will bring major excitement and national attention to the Fireflies and city of Columbia,” said Fireflies President John Katz. “Baseball fans, sports fans and Tim Tebow fans will likely come from around the southeast to see him play. We expect this to add to the energy at Spirit Communications Park and around downtown Columbia, especially during our opening weekend (April 6-9).”