There are moments in your life that you never forget. For Liberty wrestler Josh Ferenczy, he had two of those in the span of a few minutes.

But it was what he did next that made the night one he and his girlfriend would never forget.

A Match for Life: LU Wrestler proposes to girlfriend

MUST SEE: Liberty University Wrestling senior Josh Ferenczy won a National Collegiate Wrestling Association championship and then gave the crowd an even bigger thrill when he proposed to his girlfriend!

Posted by Liberty University Game On on Thursday, April 6, 2017

After winning the match, while his hand was being raised in victory, Ferenczy took the post-match celebration to another level by bringing his girlfriend Riana Turner up to the podium. Josh caught the ring, tossed by a friend and then dropped to one knee, pledged his love for Riana and popped the question. 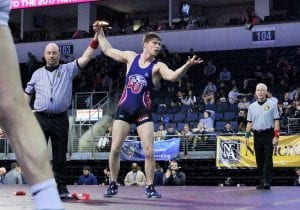 “I wasn’t thinking about doing any proposal when you have the toughest match of your life coming up right before, that you are mentally preparing for,” said Ferenczy. “It was like instantaneous for me, kind of jumped from one to the other.”

“That was the first time in 34 years of coaching that I’ve seen that happen at a wrestling match,” Liberty Head Coach Jesse Castro said. “He actually proposed to his girlfriend right on the stage after he won the national championship.”

“It was perfect. It was just what you want to hear,” said Turner. “He’s actually my first boyfriend. It’s crazy to be engaged to the first man I ever loved.” 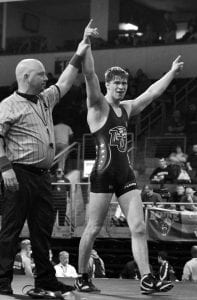 Best wishes to Josh and Riana on a long and happy marriage.