One of the goals of the new Sports Spectrum is to highlight local ministries doing awesome work through sports. Today we feature UrbanPromise as told by their founder and president, Bruce Main

“I was pretty suspicious of a Chicago Bear coming into Eagle territory,” confessed one of my faithful UrbanPromise supporters. “I really wondered if you guys had lost your minds.”

A few minutes earlier, Charles “Peanut” Tillman wooed 200 die-hard Philadelphia fans at our annual business person’s breakfast.  His inspiring “rise-from-obscurity-how-I-ended-up-in-the-NFL” story left our audience speechless.  After playing for little known University of Louisiana at Lafayette, Tillman was drafted in the second round by the Chicago Bears in 2003.  During his successful 12 year career as a Bear’s cornerback, Tillman earned two Pro Bowls appearances and helped his team reach Super Bowl XLI. But it wasn’t Tillman’s defensive prowess that won the hearts of these Eagle’s fans this particular morning.

It was Tillman’s faithful community service, pay-it-forward attitude and winning of the coveted Walter Payton, NFL Man of the Year Award—an award recognizing one NFL player who takes his celebrity status and leverages it to make the world a better place—that allowed him to transcend the regional allegiances of a loyal Philadelphia-area  fan base.  And it was Tillman’s heart and compassion that moved him beyond the Windy City to an organization rooted in the heart of a forgotten American city—Camden, NJ. 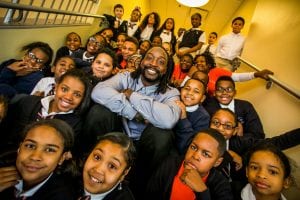 In 2007 Tillman discovered UrbanPromise through an ABC 20/20 Special called Waiting On the World to Change.  Hosted by Diane Sawyer, Waiting followed real children growing up in the inner city of Camden, chronically their daily struggles of dealing with poverty, violence, drugs and hopelessness.  Viewed by over 10 million people, Waiting on the World touched a national nerve, outraging citizens across the country who found it unconscionable for innocent children to bear such hardship.

Like many viewers, Tillman and his wife Jackie decided to do more than just turn off their television and move on with their lives.  They called the office and signed up to sponsor a child.  For 25 years UrbanPromise has been offering hope to Camden youth through after school programs, summer camps, job training, alternative schools, Bible study, and college readiness programs.  The core of the organization has always been about relationships and the message that every child and teen is wonderfully created in the image of God.  Against the backdrop of Sawyer’s bleak report, the Tillman’s saw UrbanPromise as a beacon of hope.  In a city that sees fewer than 50 percent of its teens graduate from local high schools, UrbanPromise graduates 98 percent of its students and sends 93 percent to a 4 year university, military or gainful employment.  UrbanPromise alumni have gone on to become social workers, pastors, business owners, teachers and non-profit leaders.

A few months later, one of our staff followed up with a call to the Tillman household to clarify some information.  After a few minutes of conversation, Jackie Tillman shared how her own family was trying to keep faith and hope despite devastating news.  Tillman’s 3 month old daughter was diagnosed with cardiomyopathy, which enlarged her heart and kept it from beating properly. A heart transplant was eminent—a highly dangerous and risky procedure.  The Tillman’s were desperate for the encouragement and prayers of friends and strangers.  The UrbanPromise community responded, a special bond was formed, a successful transplant was performed and Tiana Rene continues to flourish today.

Over the past 8 years Jackie and Charles have made numerous trips to Camden without any fanfare or media attention.  They mentor teens, help with college funds, take youth to football games, encourage our staff, and help our families with emergency needs.  Most important, Charles and Jackie are just ordinary people who care about kids who have face incredible odds.

After sponsoring a dinner to Ruth Chris Steak House for some UrbanPromise students, Tillman shared: “There are stereotypes about Camden and my goal is to have these kids prove them wrong.  I’m trying to give them culture so when someone looks at them and doubts them, they can say, ‘I may be from Camden, but I’ve been to nice places.  Don’t look down on me.’”

This June, Tillman will be the keynote speaker at graduation for both UrbanPromise schools—the CamdenForward School and the Academy.  Jackie and Charles will pay for their own flight, cover their own hotel expenses, and they’ll probably take our graduates out for lunch or dinner.  Together they will attempt to model that with celebrity and success is the responsibility to use one’s influence to make the world a better place.

The content of Tillman’s graduation address is still unknown.  I’m sure he’ll pepper his talk with a few stories from his years with the Bears—maybe a reference to his last Super Bowl appearance with the Panthers.  I’m sure he’ll remind our kids to work hard, dream big and give back to their community.  But the most important message for the children of UrbanPromise will be that the Tillman’s remain committed.  In a community where politicians, parents, educators and civil servants have broken so many commitments to our most vulnerable citizens, having a couple keep their promise is a refreshing message.  It’s not just a promise….it’s an UrbanPromise.

Bruce Main is the Founder & President of UrbanPromise.

To learn more and get involved, check them out at http://www.urbanpromiseusa.org.