One of the goals of the new Sports Spectrum is to highlight local ministries doing awesome work through sports. Today we feature Idols Aside Ministries as told by their co-founder Becky Wright.

On April 6, 2017 in Winter Haven, Florida a crowd of listeners sat silent with tears in their eyes as they heard 13-year NFL Quarterback, Luke McCown, tell of the first Son’s Without Father’s retreat he had ever attended with Idols Aside Ministries almost 8 years ago.  “I can’t forget sitting there with this young man and hearing him say that he would never forget the day his dad left them,” McCown said. “He remembers being a young boy clinging to his dad’s leg and begging him not to go” It would be this young boy’s story and many more that would bring this football player back to more retreats year after year to partner with IAM in sharing the “good news” with this young boy and so many like him.

Good news you say, what good news could you possibly have to share with boys who want nothing more than love and acceptance from their dad?  By taking these young men out into the woods and introducing them to a God who created them for a purpose, Idols Aside then opens God’s Word and introduces them to a Heavenly Father who loves them so much He sent His only Son, Jesus, to die in their place and unlike their earthly dad, He will never ever leave them! This life changing good news is especially impactful to young men who have been told so much of their lives, that they are unwanted or some kind of mistake.

The athletes who partner with IAM often tell founders Mark and Becky Wright that they leave these retreats much more impacted than the kids they have served.

This is Idols Aside Ministries in a nutshell.

Giving athletes and others a platform to reach the fatherless community with the gospel of Christ using traditional sports and the outdoors. So many of these kids have never before gone hunting or fishing or had the opportunity to spend a weekend at an incredible ranch hearing the personal testimonies of guys they have “idolized” on television.

That was the platform on which Idols Aside was created almost nine years ago. In 2009 Mark Wright felt called to put into action the command found in Exodus 20:3 “thou shalt have no other gods before me”.  He could see how sports figures had become the gods/idols of todays culture and started praying about a way to have these guys use that platform to set the “idol aside” and show the least of these a true Creator God who loves them and has great plans for their life!

A few of the athletes that have joined the cause and partnered with IAM to do traditional sports camps and/or outdoor retreats are Ben Zobrist, the 2016 World Series MVP from the Cubs, Former MLB player Luke Scott, Nashville Predators Captain Mike Fisher, as well as current and former NFL players Luke McCown, Corey Lynch and TJ Johnson. IAM has also been able to partner with incredible men such as Bobby Bowden, Bobby Richardson and Tim Tebow who have been a part of IAM’s annual events in the past to raise awareness in central Florida for the cause of reaching and ministering to the fatherless! 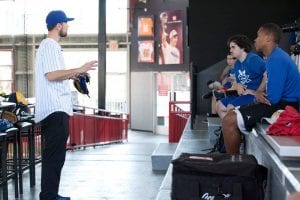 The IAM Ranch is currently located in Lake Wales, Florida and is the home of “God’s Lodge” where these outdoor hunting retreats take place.  The peaceful setting and breathtaking lodge has become a true oasis for troubled kids to come and find caring and listening ears as they sit by a campfire or throw a fishing pole in the pond.

IAM has also taken the SWF Retreats to kids and athlete partners in Tennessee in the past but have rented facilities there. They are praying for a possible second location for permanent IAM retreats to open up there as a great central location to bring more youth from other states!

There is still MUCH work to be done to get this great news to the fatherless communities of the U.S. That is where Mark and Becky wholeheartedly trust that God will take this exactly where He wants it, just as He has brought the partners and kids to them that He wants them to serve or serve alongside!

Idols Aside Ministries is a 501(c)(3) corporation and a Christ-centered ministry entrusted by God to Mark and Becky Wright. This ministry focuses on providing spiritual guidance, emotional support, and mentoring to fatherless and struggling youth. Our mission is to establish strong relationships, provide continual discipleship and guidance while modeling Christ through sports camps, hunting retreats and our unique mentor program specifically geared for young adults aging out of foster care.

To learn more about IAM or their other programs: Me Without You and Super Moms… please go to www.idolsaside.com or https://www.facebook.com/IdolsAsideMinistries.

You can go to http://www.idolsaside.com/videos/ or https://www.youtube.com/user/idolsasideministries?feature=results_main to see testimony videos of other athlete partners.