Sports Spectrum believes in highlighting local ministries doing awesome work through sports. Today we feature Deacons Prison Ministry as told by Rob Maaddi, who serves in the ministry and is also the host of Faith On The Field on 610AM in Philadelphia.

When the fans heckling you in the outfield are wearing orange prison suits, the trash-talking can be harsh.

​”He’s close enough that I can shank him,” one prisoner shouted as I chased a deep fly ball.

We were playing at a state correctional institution in Pennsylvania. For safety reasons, every batter from both teams uses the same tethered bat because a riot once broke out between rival gangs during a game and bats were used as weapons.

I slowed down as I approached the warning track, careful not to get too close to the fence. I hoped the guy was joking, but I wasn’t ready to find out if he was serious. The men in this prison yard were standing behind a high, chain-linked fence. It would’ve been easy to slip a knife through an opening.

​I quickly retrieved the ball, threw it to the cut-off man, looked up and nodded at the guy.

​The next batter made an out and the inning ended safely for me. Now, it was time for our presentation and it was my turn to speak. I shared my testimony along the first-base line in front of a captive audience, making sure to turn toward center field to address the men out there. I was open and honest, detailing my sinful past and explaining my journey to Christ and how our transparency can lead to another person’s transformation. Nothing I do or ever did on a ball field is more important.

​After I spoke to the crowd, a teammate shared the Gospel. Then we prayed with the men and witnessed to several inmates on accepting Christ as their Savior.

​A few minutes later, I jogged back to my spot in centerfield. The guy who threatened to “shank” me called me over. I walked toward him with a little hesitation. He reached between the fence with an open hand, shook mine and thanked me for telling my story.

​It was the coolest moment I’ve experienced in four years playing with the Deacons Prison Ministry.

​The Deacons are a group of men based in southern New Jersey who share a common bond: we’re brothers in Christ and we love to play ball.

Each summer, we travel across several states to play softball against inmates, using the sport as a way to gain entry into prisons. Stats show that 80 percent of inmates will not attend a religious program, Bible study or chapel service.

​But they will flock to see a game. Our crowds average around 300. Some are smaller and intimate and some are as large as 1,500. We usually play doubleheaders. Between games, one of our players shares their testimony and another player or our pastor, Joseph Bruce Sofia, shares the Gospel while the rest of the team has a chance to engage the men in one-on-one conversations and individual prayer.

​We conclude our presentation with a group prayer and invite inmates to accept Jesus as their Lord and Savior. It’s a powerful, sometimes emotional experience. I’ve seen inmates cry and shed a few tears myself.

The work God does through us is amazing. The Holy Spirit works special wonders. We’ve baptized men using bottled water on a field. We’ve returned to prisons a year or two later and inmates have started chapel service, Bible study groups and they are spreading the Word of God in their cells.

​We can play softball anywhere and many of us do. I’ll play for six teams this year. But we joined the Deacons Prison Ministry to serve God, who offered forgiveness for our sins through His son, Jesus Christ.

Luke 4:18-19 says: “The Spirit of the Lord is on me, because he has anointed me to proclaim good news to the poor. He has sent me to proclaim freedom for the prisoners and recovery of sight for the blind, to set the oppressed free, to proclaim the year of the Lord’s favor.”

​Matthew 25:40 is my favorite Bible verse where Jesus says: “Whatever you do for the least of my brothers and sisters, you do for me.”

​Think about those words our Savior spoke. These inmates are the men society considers the least. They’re shunned, they’re ignored, they’re ostracized. Few people want to give them a second chance. But we feel it’s the least we can do as Christians to reach out to them, and present them with the greatest message they’ll ever hear.

​Being part of the Deacons Prison Ministry is a tremendous honor and it’s incredibly humbling. I’m blessed to have an opportunity to serve Christ by playing a game that I love with men I respect immensely. Director Ed Wright and assistant director John Chisolm are dedicated to the ministry and work hard to provide excellent leadership.

​Our team comes from many walks of life. We have teachers, a doctor, a former American Ninja Warrior. We make countless sacrifices, giving up time with our families to travel to play these games. We pay our own way to go on an annual Crusade to visit 10 prisons and play 20 games in five days. This year, we’re heading to Michigan in July.

​We always play to win, but saving souls is our greatest victory. 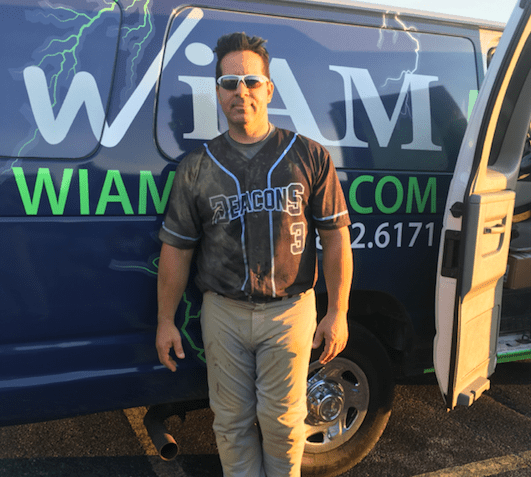