“I don’t measure a man’s success by how high he climbs, but how high he bounces when he hits the bottom,” U.S. General, in World War II, George S. Patton one said.

No words could ring more true for professional boxer Austin Trout. He’s found success, reaching the boxing pinnacle, but also has found success by how high he’s bounced back after hitting the bottom.

Trout was once on top of the boxing world. At 26-0, the man they call ‘No Doubt’ had certainly lived up to the nickname. In 2012, he had just defeated Miguel Cotto, on one of sports’ grandest stages Madison Square Garden, to retain the WBA Light Middleweight belt.

Despite becoming a Christian at the age of 5, Trout found his newfound fame intoxicating and empowering. Humility and being God-dependent turned into self-reliance. The spirit of Mammon had taken over because, in his words, he was a star and that’s what stars did.

“I immediately strayed away, doing things I knew I shouldn’t, but I rationalized it, instead of clinging to God closer. I started drifting away with an ‘I got it from here attitude,’” Trout candidly said. “I thank God He humbled me right away because, had He left me with that mindset, I would still be stuck in the same sins I’ve struggled with my whole life.”

Heaven’s humble pie came in the form of back-to-back losses, to Canelo Alvarez and Erislandy Lara, and with them Trout had hit the bottom of his professional career.

“Oh man, devastated is an understatement. I asked God to give me the strength to lose in the same manner as if I won, which is why I was so gracious in my defeat,” Trout said. “That was definitely all God because I wanted to throw a fit.”

The Alvarez loss left Trout crushed, but he felt God gave Him peace in the midst of the storm—one that could’ve left him feeling hopeless.

“My Mom, wife Taylor, kids Kaira, Elijah and Charlotte and best friends Bobbye (Matthews) and Tyler (Bishop) were all crying,” he said, “But I felt I had to be strong for them and show them I’m not hurt over it, so maybe they could feel better.”

After a second-consecutive loss in the 12th round, to the aforementioned Lara, who he felt outclassed him, Trout questioned his boxing career. For the first time since putting gloves on, at age 10, he fell out of love with boxing. Though, looking back on it, he feels a greater purpose was being served.

“Hindsight is 20/20. I didn’t fully turn away from my sinful ways, which is why the second loss was much worse,” Trout said. “I feel that God has a special task for me because if He didn’t He would’ve allowed me to be stuck in those ways without immediate repercussions. A lot of other people get away with the things I did and are still successful in all they do, but I believe the Most High is holding me to a higher level because I’m His, so I can do His will.”

True to form, the only thing hitting bottom did for Trout was refueled his desire to be the best. After all, adversity was nothing new for him as he had to overcome many obstacles to arrive at the destination of his dreams.

“After those two losses, I had to fight for my chance again. I got there by grit and grace, so that’s what I recommitted myself to,” Trout said.

That determination led to four straight victories as he worked his way back into what he desired—another world title shot last May in Las Vegas, which saw Trout (30-3, 17 KO) pitted against Jarmall Charlo (24-0, 18 KO). Despite a game effort, one in which Trout demonstrated his boxing acumen; he lost a unanimous decision as Charlo successfully defended his IBF Light Middleweight title. Despite the loss, Trout demonstrated a warrior’s spirit with tremendous heart and resiliency.

While disappointed with the loss, Trout remained faithful, trusting God has a plan. A good friend texted him after the fight and asked him, “What if this loss, one of the biggest losses for you personally, is somebody’s biggest victory . . . what if your witness is the reason they end up in heaven?”

Days after the fight, that proved to be the case as Trout had fans on Twitter telling him he was the reason they got saved—news that lifted Trout’s spirit.

“At the end of the day, I didn’t get the glory I worked hard for, but God ended up getting the glory through my humility. If the only way He was going to get the glory was through my demise then mission accomplished,” Trout said.

I’m one of the top guys in this game. Until God makes me disbelieve that, I’m going to continue to believe it.”

Growing up in Las Cruces, New Mexico, Trout was raised by his mom Minnesa Johnson (affectionately known as MJ), who would regularly read children Bible stories and pray with her son and younger sister Candance. Austin’s best friend Bobby invited him to church for the first time at age five. Trout’s spiritual foundation had been laid.

Trout’s renowned work ethic, perhaps, stems from his mom M.J., who as a nurse worked graveyard shifts at the hospital when Austin was a kid. Trout’s mom always made her children feel loved.

“I never felt unloved, unwanted or abandoned. The time we did spend together, we felt all her love all the time. She spread herself so thin,” Trout said.

Austin said his mom not only taught him about God’s love, but walked out God’s Love. “My mother is the ultimate example of sacrifice, unconditional love and patience. She really showed me how God loves us. No matter what, she always had her baby’s back.”

Trout was too small for basketball and too slow to excel at football, so boxing was a match made in heaven when he first put gloves on as a 10-year-old.

“The age, weight and experience factors allowed me to come along at my own pace. I was made for boxing. It’s like God custom-built it for me,” he said.

With five years’ experience in the ring, at the age of 15, Trout began to dream about one day becoming a professional boxer.

A strong showing at the Junior Olympics, his first National tournament, only furthered this belief.

But while he was focused in the ring, he was anything but focused outside of it. Trout fell in with the wrong crowd in middle school and joined a gang. He would throw rocks through windows, smoke cigarettes and continue this lifestyle into high school. More bad decisions, more marijuana and eventually, he begin selling drugs.

The turning point came as he was about to fight in the U.S. Amateur. That’s when Trout, 18, uttered a prayer, sincere words of repentance, which would change his life.

“I know I haven’t been living right. I don’t think You’re very proud of me, right now, but if You allow me to win this fight, I’ll wash my hands of it.”

Trout, who is trained by Barry Hunter, won the tournament and became an alternate for the Olympics.

“You think, I want to be perfect and do everything right, but that’s not reality. But even in that time, I still felt His Presence, grace and love. He watched out for me. ‘No matter how much you try to mess this up this is not the path I have for you,’” Trout said.

“I’m going to stray, but I would be lying if I felt like I wasn’t destined for greatness.”

SHINING LIGHT IN THE DARKNESS

Brian Campbell, a CBS boxing/MMA/wrestling analyst and writer, who is also a strong believer in Christ, says Trout stands out among his contemporaries for the Light he shines.

“There’s a real gentle and genuine manner how he deals with the media,” Campbell told Sports Spectrum. “He’s approachable and thoughtful in his responses. You sense the substance to his character immediately.”

Campbell points to the aforementioned San Antonio bout, one that many boxing fans regard as a classic, where he faced Alvarez (47-1-1) in 2013. While Trout suffered his first defeat, many people, including Campbell, felt that he had done enough to win the fight. As stellar as his performance was, something else impressed Campbell even more.

“In the post-fight interview, he could’ve cried foul and no one would’ve questioned him,” Campbell said. “But he took the loss with humility and made no excuses. That moment stood out to me about what kind of person he is.”

Trout, who has three crosses, boldly displayed, on his left hand, says no matter what boxing has in store for his future, God has matured him so much through it.

“Whatever happens in this boxing game doesn’t matter,” said Trout. “My walk with God is tighter because of it. Pleasing God is more important than anything in this world! That’s more important than the belts and fame. I believe He blesses me with a platform in order to please Him. There is no doubt I am nothing without Jesus and I wouldn’t be here without Him. The fact He saved me from so many things, including certain death from my sin, is my reason I live for Him.”

Trout will return to the ring on Saturday October 14 to face Jarrett Hurd for the IBF title on Showtime Boxing. 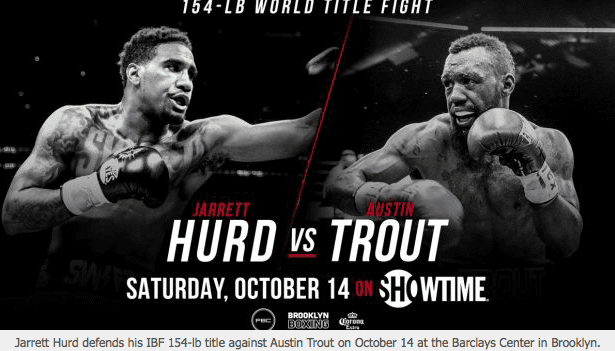