ONE COACH: Why I coach - Steve Broussard

The morning bell rings at Fort Vancouver High School.  Students race through the halls trying to get to class, when a teaching moment arises.

The new football head coach went to open a door for a couple of girls entering the school when young man got to it first. The boy gripped the handle, yanked the door open and breezed through it, leaving the girls behind.

“I went and held the door for the girls and they said, ‘that’s nice.’ Then I grabbed the kid and I said ‘Hey man, why don’t you come over here and hold this door.’ Those are the little things you have to do to show respect for women.”

This is the reason why nine-year NFL veteran Steve Broussard accepted the job at the school in Vancouver, Wash. He’s there not only to help rebuild Fort Vancouver’s football team, but to model the behavior of what a gentleman looks like.

“When I took this job, during the team meeting, I told them I didn’t come here for the wins and losses, Broussard told Sports Spectrum. “…I came here to change behaviors, to change attitudes, and to change mindset. That’s my purpose here.”

With message fresh in their minds, Broussard followed up by printing T-shirts with the team’s new motto – “It’s not about me.” Having the motto on a T-shirt is simple, but seeing the young men embody the actions of an unselfish team requires more patience.

The team Broussard inherited didn’t have a tradition of excellence on the gridiron to rely on. The Trappers haven’t appeared in the playoffs since 2004 and the deepest it’s been in the postseason was to the quarterfinals back in 1973. Last season the Trappers went 1-8 and were apart of two in-game fights that caused one game to be called early, according to Clark County Today.

So Broussard knew he had no time to waste and looked for any opportunity to help the boys see how they can become leaders. This brings us back to the importance of the simple act of holding the door for a woman.

“When those opportunities present itself, we know those are little tests,” says Broussard. “So it’s just being aware of all the scenarios that present itself so that I can remind them.”

Broussard also uses reminders from the classroom, especially when the teacher is interrupted by his players talking in class.

“It’s like I ask for your eyes and ears when I’m about to talk, it’s the same thing in her class. Give her your eyes and your ears,” says Broussard. “So it’s just getting them aware to let them see it for themselves because it’s second nature to them. They don’t see it and we have to keep showing it to them.” 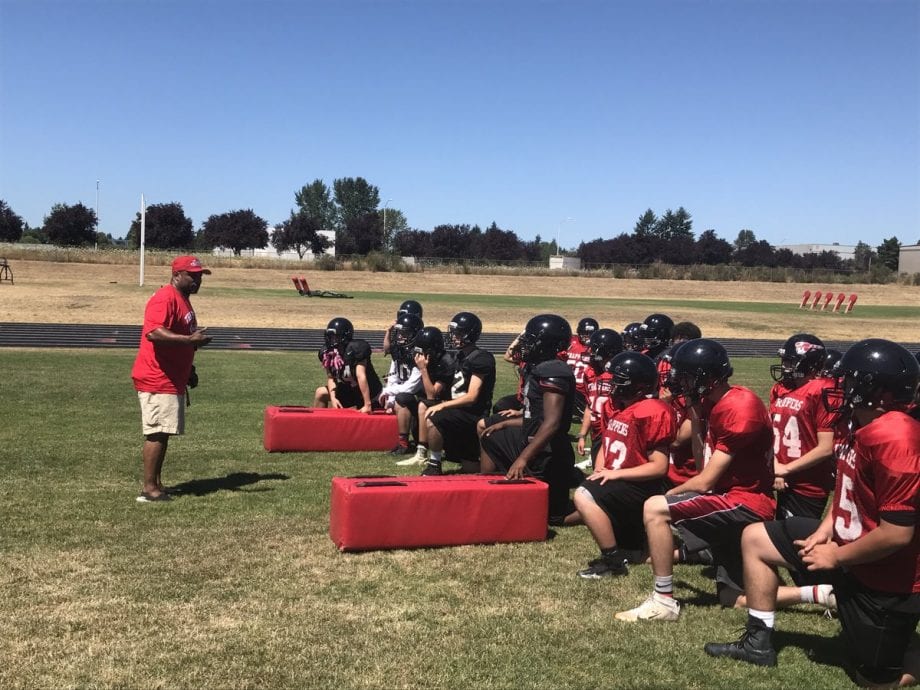 The continuous effort of developing new habits carries over to the field as well. On Monday’s through Wednesday, Broussard uses the practices to challenging his players mentally and physically, doing what he can to distract them. He’ll may yell at them or just speak to them during a play. Anything he can think of to get the players unfocused. The thought here is to condition his players to think past the “noise” and become mentally stronger.

The week of practice wraps up with ‘Positive Thursday’s’ where he scripts plays for the team and encourages them to succeed for the game. It’s a tactic Broussard learned from his high school days in Los Angeles from his mentor and coach Jeff Engilman, who daily preached the importance of accountability to his team.

The changes in culture has begun to pay off, just not yet on the scoreboard. The Toppers are 0-6, scoring only 13 points on the season thus far. The struggles on the field are tough for any coach but Proverbs 3:5-6 helps Broussard understand that his purpose is greater than wins and losses.

“Trust in the Lord with all you heart, and lean not on your own understanding. In all your ways acknowledge Him and he will direct your path,” recited Broussard. “So that there says it all, you know? When I get outside of myself, or when I’m trying to figure it out, or when I’m trying to see the madness in it.”

Fort Vancouver has two more opportunities to notch their first win of the season. But, even if that doesn’t happen, Broussard and his coaching staff has found joy knowing their time has been wisely invested.

“I wouldn’t be in my job if I didn’t believe in God. What I do as far as a football coach and what I do as far as my work, is nothing but God-driven because if I had my choice I wouldn’t be doing it, right? But, then I find pleasure in what I do. So when I find the pleasure I know that it’s God. And I find the joy I’ve grown to understand that this is where God has me and I trust it.”

ONECoach is now part of The Sports Spectrum Network. For more information, visit the OneCoach website.