Chicago Bears tight end Zach Miller is walking, something he didn’t know he would be able to do again two months ago.

Miller, 33, posted on his Instagram account on Dec.17 his first steps since needing emergency vascular surgery to save his left leg on Oct. 29.

In the Week 8 match up against the New Orleans Saints, Miller was trying to catch an over-the-shoulder pass in the end zone when his leg bent awkwardly on the play. He stayed down for several minutes and needed to be taken off the field on a cart.

He was rushed to University Medical Center New Orleans after dislocating his left knee. Doctors performed emergency surgery that night to repair a damaged artery in his leg that could have caused Miller to lose his leg. 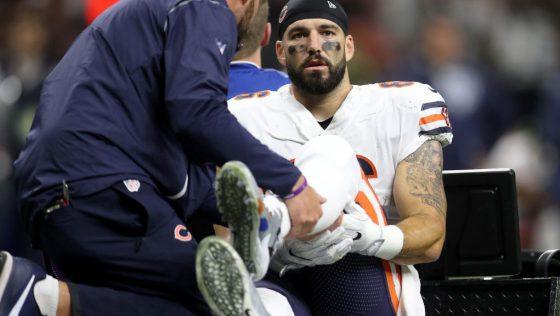 Fortunately, that was not the case, and after eight surgeries, he was able to walk up to Halas Hall in Chicago and receive the “Media Good Guy” award from the Chicago chapter of Pro Football Writers Association.

“That was big,” Miller said to ESPN. “That didn’t feel that good, but it did feel good. That’s just something I’m working throughout the rehab and trying to get stronger.”

Miller still has one surgery to go, but doctors told him that his leg needs to strengthen before he can have the final surgery. He’s a free agent after this season, but football is in the back of his mind. Right now, it’s all about rehabbing his leg for life after the game.

“I’m doing it [taking steps] every day just to kind of work on it,” Miller said to ESPN. “I’m not walking around the city and doing things of that nature but I’m just working on the strength and still trying to build things up around my knee, so once I do get that last procedure done, I have strength built up around it so it will help make the rehab little bit easier for.”