Jason Romano: Eagles 30 – Falcons 17 – Philadelphia has proven to be dominant at home. The Eagles fans will play a big part in helping their team move on to the NFC Championship.

Justin Adams: Eagles 23 – Falcons 20 – Call this a hunch, but I believe Nick Foles puts it all together this week against the Falcons. Two touchdowns, no picks and a field goal victory over Atlanta.

Jon Ackerman: Eagles 23 – Falcons 20 – Philly doesn’t have its QB1, Carson Wentz, but QB2 will do. Nick Foles starred and then struggled as the starter for the final three games, but he can handle the Falcons. The stout Eagles D will always give them a chance. 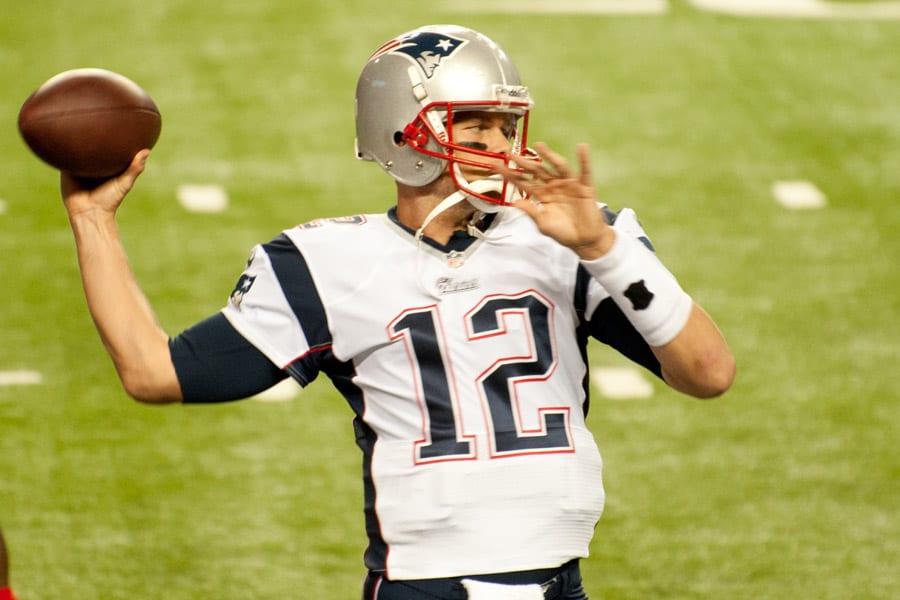 Jason Romano: Patriots 38 – Titans 21 – This game will be close for a while, but in my experience it is never a good idea to pick against Tom Brady and Bill Belichick at home in the playoffs.

Justin Adams: Patriots 30 – Titans 24 – The Titans will try to control the clock behind the running game of Derek Henry, but the Patriots explosive offense will be too much for Tennessee to handle. Give me Tom Brady and the Patriots by a touchdown.

Jon Ackerman: Patriots 40 – Titans – 14 – This won’t be close much past the coin toss. Tennessee got lucky in its win over Kansas City (a QB touchdown pass to himself?), and that won’t continue in New England. 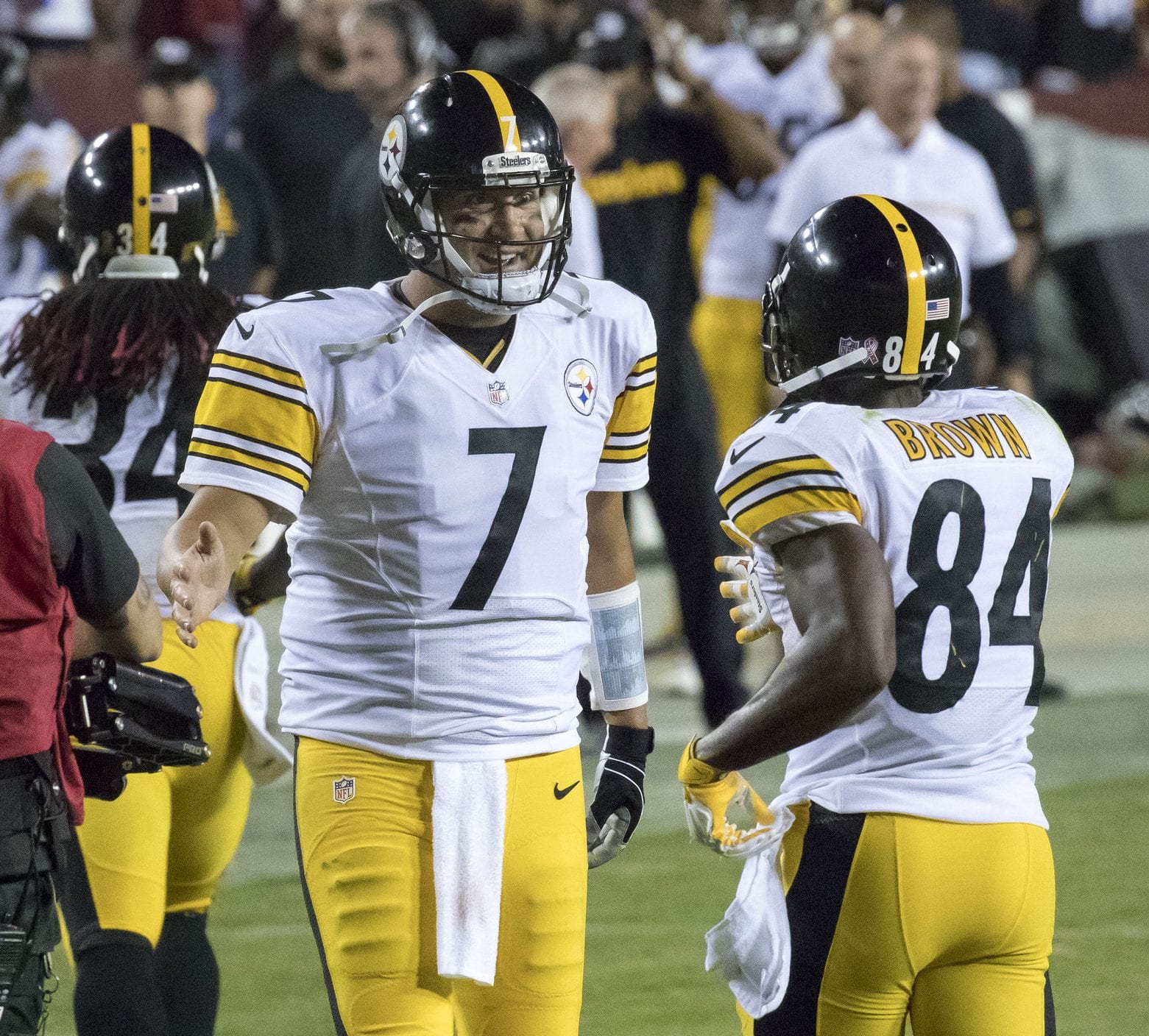 Ben Roethlisberger of the Pittsburgh Steelers celebrates with Antonio Brown during a game against the Washington Redskins at FedExField on September 12, 2016 in Landover, Maryland. Photo Courtesy: (Photo Courtesy: Keith Allison/CC License https://creativecommons.org/licenses/by-sa/2.0/legalcode)

Jason Romano: Steelers 21 – Jaguars 16 – Jacksonville’s defense has been awesome all season but Pittsburgh and Big Ben will do just enough to advance.

Justin Adams: Steelers 20 – Jaguars 17 – Welcome back Antonio Brown. The Steelers will need you at your best to beat Jacksonville. First time these two teams played, Big Ben threw five picks including two pick-sixes. The Jaguars tough defense will make life hard for the Steelers offense, but Pittsburgh will pull through by a field goal.

Jon Ackerman: Steelers 28 – Jaguars 7 – The Jags could only put 10 points on Buffalo last week; that won’t work against the Steelers. If Pittsburgh can keep from turning the ball over five times, like they did in a regular-season loss to the Jags, it’ll move on to face New England. 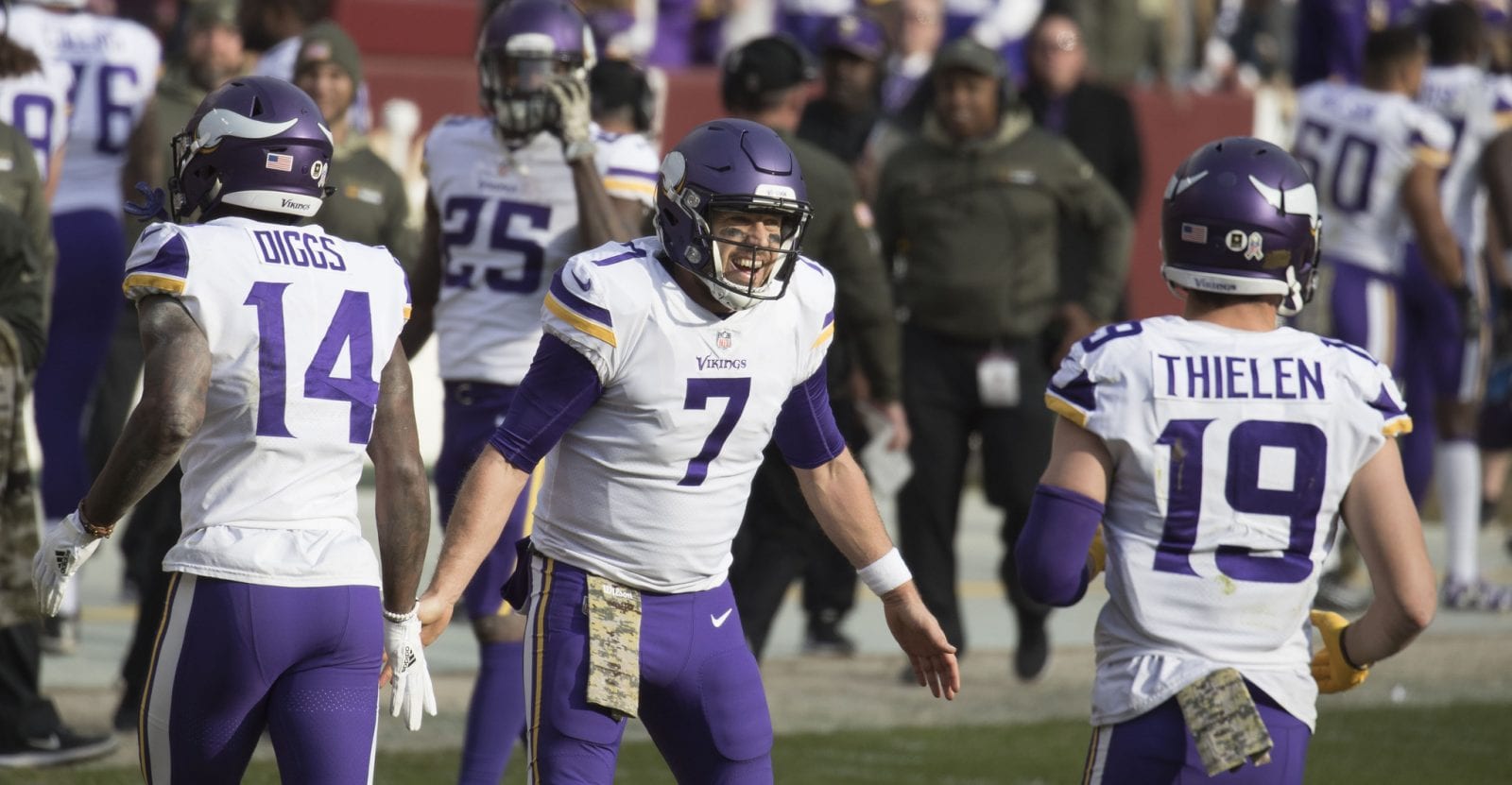 Vikings QB Case Keenum (7) hands off the ball to is running with teammates in a 2017 game against the Redskins. (Photo Courtesy: Keith Allison/CC License https://creativecommons.org/licenses/by-sa/2.0/legalcode)

Jason Romano: Saints 28 – Vikings 24 – The cinderella season for the Vikings ends thanks to a dominant performance by Drew Brees and Mark Ingram. Who Dat!

Justin Adams: Vikings – 30 – Saints 27 – This will be the best quarterback matchup of the Divisional Round, but I will take the Vikings smothering defense to hold off Drew Brees and the Saints.

Jon Ackerman: Vikings 31 – Saints 21 – You’ve got a quarterback making his first playoff start (Minnesota’s Case Keenum) going up against a QB making his 13th postseason start (Drew Brees). Yet, Keenum is playing at home with the league’s best defense on his side.