By Aliese Willard Mar 9, 2018
Fans watch as Chris Corning flies off a jump at the men's slopestyle final at the 2018 Burton US Open. / Aliese Willard, Sports Spectrum

He earned an 87.95 after landing back-to-back frontside and backside triple cork 1440s, but needed to top 88.10 in order to take the lead from McMorris. Marcus Kleveland from Norway placed third with a score of 87.20.

Prior to the men’s slopestyle final, the women’s final competition was canceled due to dangerously high winds. Though the winds died down a bit for the men’s finals, the icy slopes and limited visibility made for less than ideal conditions.

After placing third in the qualifiers on Wednesday, Corning turned it up, increasing the difficulty of his run, yet landing each jump with confidence and ease. His podium finish was a welcome improvement from the 2018 Pyeongchang Olympics, where Corning was in bronze medal position before being bumped out on the final run.

When he stepped onto the podium at the U.S. Open, Corning was quick to give a shout out to his sponsors, family and friends before thanking God. 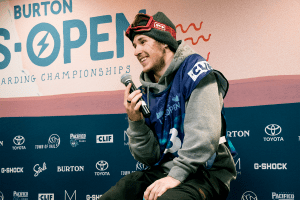 “My faith in God helps me out when I’m nervous,” Corning said in an exclusive interview with Sports Spectrum. “To be able to look up and know that there’s Someone above who’s helping me out, helping me through life. [My faith] is super important to me. You just have to look to God and know that He has a plan for you. Hopefully that plan is the same one you have in mind but sometimes it’s not.”

With his faith as his secure foundation, Corning isn’t afraid to go big. But in his opinion, the future of slopestyle isn’t in bigger tricks, but in smarter tricks.

“I don’t think more spins or flips are necessarily the future of slopestyle, I think it’s a lot more creative tricks inside of these big tricks,” he said. “They’re making the jumps a lot smaller than they used to so you have to flip everything a lot faster and we’re trying to put more style into our runs. Since we have to do these big tricks a lot faster, we have to be a lot stronger in order to get tricks in.”

Corning will again seek first place at his final competition of the season in the Italian Alps on Saturday.

“I like to go by the motto, ‘If you’re not first, you’re last,’” he said. “If you don’t get first, you really have to up your game. I really want to win and gain that top spot, or at least do something crazy.”