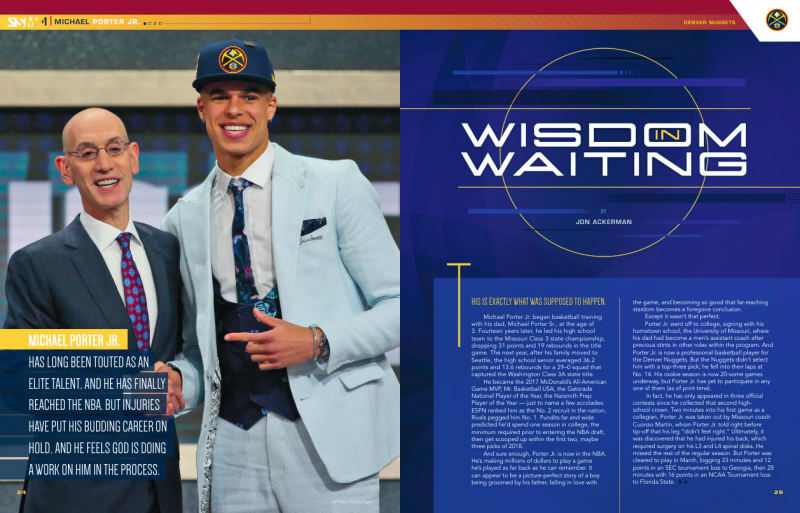 MICHAEL PORTER JR. HAS LONG BEEN TOUTED AS AN ELITE TALENT, AND HE HAS FINALLY REACHED THE NBA. BUT INJURIES HAVE PUT HIS BUDDING CAREER ON HOLD, AND HE FEELS GOD IS DOING A WORK ON HIM IN THE PROCESS.

This is exactly what was supposed to happen.

Michael Porter Jr. began basketball training with his dad, Michael Porter Sr., at the age of 3. Fourteen years later, he led his high school team to the Missouri Class 3 state championship, dropping 31 points and 19 rebounds in the title game. The next year, after his family moved to Seattle, the high school senior averaged 36.2 points and 13.6 rebounds for a 29–0 squad that captured the Washington Class 3A state title.

He became the 2017 McDonald’s All-American Game MVP, Mr. Basketball USA, the Gatorade National Player of the Year, the Naismith Prep Player of the Year — just to name a few accolades. ESPN ranked him as the No. 2 recruit in the nation; Rivals pegged him No. 1. Pundits far and wide predicted he’d spend one season in college, the minimum required prior to entering the NBA draft, then get scooped up within the first two, maybe three picks of 2018.

And sure enough, Porter Jr. is now in the NBA. He’s making millions of dollars to play a game he’s played as far back as he can remember. It can appear to be a picture-perfect story of a boy being groomed by his father, falling in love with the game, and becoming so good that far-reaching stardom becomes a foregone conclusion.

Except it wasn’t that perfect.

Porter Jr. went off to college, signing with his hometown school, the University of Missouri, where his dad had become a men’s assistant coach after previous stints in other roles within the program. And Porter Jr. is now a professional basketball player for the Denver Nuggets. But the Nuggets didn’t select him with a top-three pick; he fell into their laps at No. 14. His rookie season is now 20-some games underway, but Porter Jr. has yet to participate in any one of them. 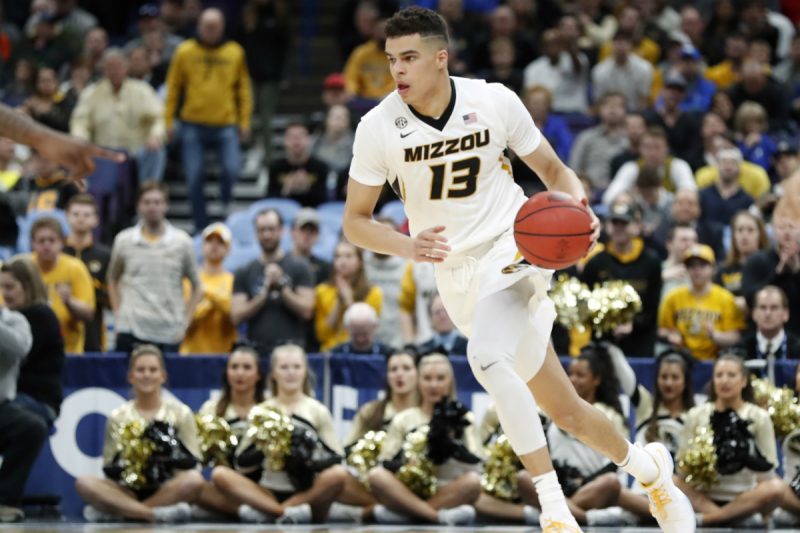 In fact, he has only appeared in three official contests since he collected that second high school crown. Two minutes into his first game as a collegian, Porter Jr. was taken out by Missouri coach Cuonzo Martin, whom Porter Jr. told right before tip-off that his leg “didn’t feel right.” Ultimately, it was discovered that he had injured his back, which required surgery on his L3 and L4 spinal disks. He missed the rest of the regular season. But Porter was cleared to play in March, logging 23 minutes and 12 points in an SEC tournament loss to Georgia, then 28 minutes with 16 points in an NCAA Tournament loss to Florida State.

And so came to an end the much-anticipated college career of Michael Porter Jr.

Despite the back injury, he still declared for the NBA draft. His stock had taken a hit — teams in the top five weren’t going to spend such a valuable pick on a bum back — but there was little doubt he’d still go in the first round, possibly even to a lottery team. The Nuggets held the last lottery pick.

“We were very surprised, and happily so, that Michael continued to fall down the board,” Denver’s president of basketball operations, Tim Connelly, said on draft night. With a young squad that was surprisingly deep for a non-playoff team (the Nuggets missed the postseason by one game), Denver didn’t need a rookie to come in and contribute right off the bat.

“At some point it becomes a risk-reward ratio,” Connelly said. “We think he’s an elite talent, a guy [that] with no back issues we wouldn’t have the good fortune of drafting. I think you have to take a swing at guys like that. … I think we’re going to be extremely patient, we’re going to take the long view for everything we do with him. But he was there [at No. 14] certainly because of concerns about the health of his back.”

From where he sits now — on this particular late September day, behind a draped table in the Nuggets’ practice gym at the Pepsi Center during the team’s media day — Porter sees the injury as a blessing. A young man of strong faith and blessed with elite basketball talent, he’s asked how he stays humble.

“Honestly, God kind of did humble me Himself with the injury,” the 20-year-old said amid the buzz of media activity around him. “Just being honest, I kind of feel like it was a God-thing that I got hurt, because I feel like going into college [as the] No. 1 recruit, and then if I was to go to the League, [possibly a] No. 1 pick, I just feel like I wasn’t ready spiritually to handle it. So it’s like He almost did that for my blessing.

“That’s how I view it now. I used to not view it like this, but I view it now like He did it for a blessing for me so I would have this time and try to mature myself — [go] through a struggle and mature — so when I get back healthy, I’m on top of things.”

When he gets back healthy is the big unknown. The 6-foot-10 forward underwent a second spinal surgery in July, and though he has said he’s pain-free, the Nuggets remain in no rush to get him into game action. The team has repeatedly said there’s no timetable for his return. Following media day, it even declared him “off limits to media while he is injured.”

So there exists the possibility that Porter Jr. may sit out another season…