In the News: R.A. Dickey 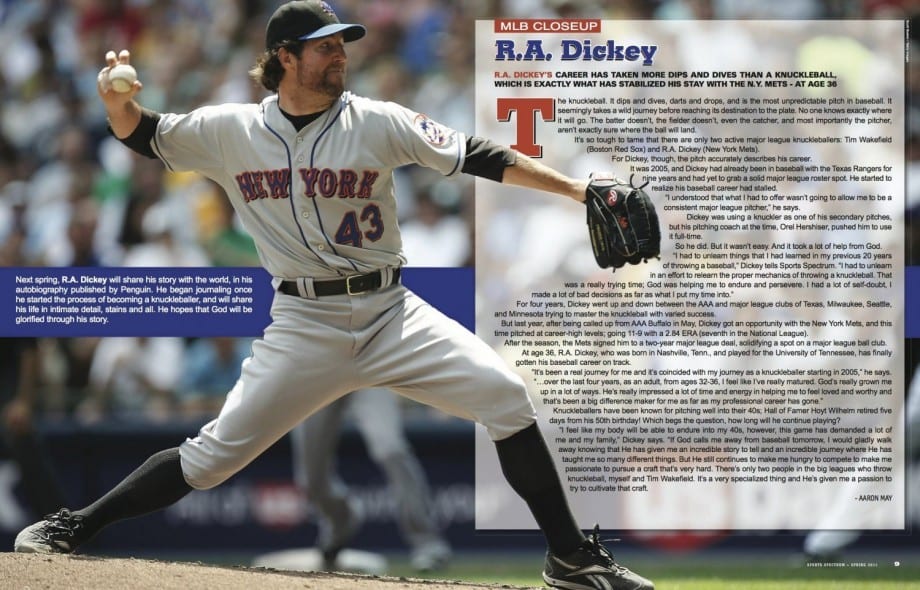 “I had to unlearn things that I had learned in my previous 20 years of throwing a baseball,” Dickey tells Sports Spectrum. “I had to unlearn in an effort to relearn the proper mechanics of throwing a knuckleball. That was a really trying time; God was helping me to endure and persevere. I had a lot of self-doubt, I made a lot of bad decisions as far as what I put my time into.”

But last year, after being called up from AAA Buffalo in May, Dickey got an opportunity with the New York Mets, and this time pitched at career-high levels; going 11-9 with a 2.84 ERA (seventh in the National League).

At age 36, R.A. Dickey, who was born in Nashville, Tenn. and played for the University of Tennessee, has finally gotten his baseball career on track.

“It’s been a real journey for me and it’s coincided with my journey as a knuckleballer starting in 2005,” he says. “…over the last four years, as an adult, from ages 32-36, I feel like I’ve really matured. God’s really grown me up in a lot of ways. He’s really impressed a lot of time and energy in helping me to feel loved and worthy and that’s been a big difference maker for me as far as my professional career has gone.”