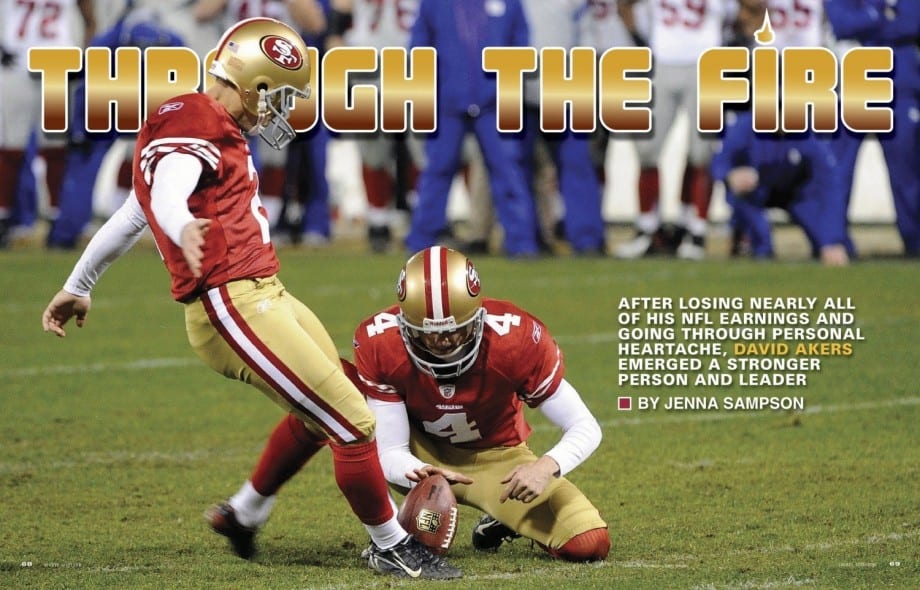 After losing nearly all of his NFL earnings and going through personal heartache, David Akers emerged a stronger person and leader

It’s only fitting that San Francisco 49ers kicker David Akers considers the Old Testament account of Shadrach, Meshach and Abednego his favorite Bible story. These three guys not only survived being thrown into a fiery furnace, but Jesus was seen there in the fire with them through it all. The same can be said of Akers, a devout Christian who has faced some trying times over the past few years.

NFL fans may recall the 2010 playoffs, when Akers was in his 12th season with the Philadelphia Eagles. The night before the team’s wildcard game, he and his wife Erika received the stunning news that their 6-year-old daughter had a malignant tumor. With difficulty focusing the next day, Akers missed a few kicks he normally would have pounded through the uprights. The Eagles lost 21-16, and without a word to Akers, drafted a new kicker a few months later.

To add to the fire, in 2009 Akers discovered he’d lost most of his life savings in a Ponzi scheme, along with several other players. The legal proceedings continued into August 2011, when he had to testify at trial. And just like his favorite Bible story, God was right there with him through it all.

“A lot of bad things happened in 2010,” he says. “I had lost all of that money, I had issues on the field, and wanted a new contract with the Eagles. Then, I got asked to speak at a convention about faith. I said to myself, ‘Wow, right now, I don’t really want to be speaking about faith.’ I felt like I had a chink in my armor. The Lord said, ‘Dave, this is for you.’”

The 2011 NFL lockout added to his uncertainty about the future, left waiting for months to see his future unfold. Not surprisingly, when the lockout ended, Akers had several teams pursuing him. The accomplished kicker chose the 49ers, having known the Harbaugh family for years, and the fact that special teams coach Brad Seely was his first NFL coach.

“It really came down to comfort with the organization—who I knew there, and how they ran their program,” he says. “That set me up to say, I can move my family 3,000 miles and not know anyone. It was a leap of faith…did I pick the right team? I flew out 36 hours later. My wife asked me if I’d had that aha moment that I was in the right place. I said, absolutely not. I kept taking one step at a time.”

What began to unfold in San Francisco is an unforgettable story.

“I knew he was a great guy and a high-character guy,” 49ers head coach Jim Harbaugh said during the season, “but I didn’t anticipate what kind of a leader he was and what kind of impact he’d have on our team. I don’t know if I’ve ever seen a kicker be as much of a leader as David has been.”

Akers, who is currently enrolled in an online pastoral degree program through Global University, prayed that he would have a big impact on the team. “I wanted to be a huge Christian leader, and to have my actions matching up with what I was professing,” he says.

Before every game, Akers leads the team prayer and tries to turn it into a short, meaningful message for the players. “I try to choose a Scripture and back it with a reality in life and bring it into what we do on the field,” he explains. “People say it’s just a game, but it’s so much more than that. It’s our job and livelihood.”

And speaking of livelihood, Akers made the 2011 season a memorable one. He and his kicking unit began to break NFL records right and left. “I had no idea I was coming close to breaking Jerry Rice’s team record (of most points in a season). I look at it as, man, it’s amazing to see all these things lining up.”

He finished the season as the top kicker in the league, an exciting follow-up to a tough year, and most importantly, a daughter with a clean bill of health! It’s only fitting that Akers’ life verse is Romans 8:28, “And we know that in all things God works for the good of those who love him, who have been called according to his purpose.”

“It’s hard as a human being to conceptualize ‘in all things.’ I never had that aha moment when I came to the 49ers,” he shares. “But it was crystal clear that God’s hand was on this whole season in my life. Two years ago dealing with the Ponzi scheme and losing 9 out of 11 years of my salary. Being able to have a job after the lockout. Last year, a diagnosis of a malignant tumor in my daughter the night before the Packers game and having that removed the next week. The blessing of how we were able to find out about (the tumor). The wonderful news that we’ve been getting on a quarterly basis (about her), and now we get to leave that up to a bi-yearly basis because of the good news we’ve been getting. I look at that as, I think this will be her testimony in her life.

“With that, I say that this year was amazing. I had bad things happen, but it’s hard to say, ‘I’m going to rejoice in this.’ There were a lot of tears, and asking God, ‘What do you have for me? Can you tell me which direction to go?’ The only thing I could do was take one step in front of me…baby steps of faith. That doesn’t mean it was easy. There were days of worrying, but then I’d read Matthew 6:34, ‘Do not worry about tomorrow, for tomorrow will worry about itself.’ I had to keep going back to the promises and the truth (of God), and that’s what got me through.”

And as the 49ers prepare for another successful season, Akers will be there to keep all eyes focused on Christ in the huddle. “We can use this platform to make a difference,” he says wholeheartedly. “When all eyes are trained upon us, let’s give God the glory in all we do. Trying to make a daily difference in the life of someone and be as Christ-like as possible. That’s my message and what I try to live by.”

And just as Shadrach, Meshach and Abednego had an unwavering faith in that fiery furnace a few thousand years ago, Akers will stand firm no matter what he faces in the years to come.

This story was published in the Vol. 26, No. 3 issue of Sports Spectrum. Freelance writer Jenna Sampson lives in Carlsbad, Calif.