Hollow me, breathe through

My grandpa died a few weeks ago.

It was sad and unexpected, but I’m thankful I was able to see him in Indiana the week before he died. I live in North Carolina. It was my first time in Indiana in five months. Five months. I couldn’t believe I got to see him.

I think about stuff like this a lot, whether things are just a coincidence or if God has His hand in our lives, whether life is unfolding or if God is in control of all of it. I guess I’m not real sure, but I am sure of this: God is big enough to be that small, to allow a grandchild to see his papaw one last time.

The days leading up to the funeral, I was in Indiana once again, and we had a bonfire just about every night in my grandma’s front yard. We celebrated his life that week. He was home, after all.

One night, my cousins and I were sitting around the fire, eating and drinking and laughing and crying, as we told stories about Papaw’s last few weeks on earth.

My cousin said a chaplain came into Papaw’s hospital room the day before he died and prayed the “Our Father” with our family. Somehow, Papaw’s voice was louder than everyone else’s. Even though he was the weakest. I got chills when she said that.

“Whoa! Look at the stars!” my sister interrupted.

We all looked up. Grandma’s yard is surrounded by about a dozen century-old trees, an overhang that only allows you to see a pocket of the sky, so wooded it forces you to use an entire can of bug spray.

A shooting star scraped across space. Right in the middle of our tiny view of the stars.

“That was Papaw!” my cousin said. We all saw it.

Again, I’m not sure, but why not? God is big enough to be that small, the heavens bending down to kiss Papaw’s grandchildren. 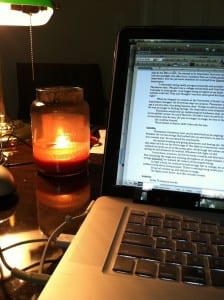 I’ve a friend in Charlotte named Dave who is teaching me things that change me. I left his office last Wednesday and drove home, windows down, blasting folk music, my hand in the wind as a rare cool of autumn in August hit my fingertips. There were tears in my eyes, not because of Dave, but because God loves me enough to bring him into my life. Because God loves me enough to help me grow. As Dave always says, God is big enough to be that small.

Dave keeps a candle lit in his office to remind himself of that. One of his mentors, Fil Anderson, Brennan Manning’s sort of protégé, used to do it. And it reminds him that Jesus is as real—each and every day, each and every moment—as the flame that burns on his desk.

This week, I started lighting a candle in my office.

God is big enough to be that small, to live through you, day by day, moment by moment, to burn like a candle inside.

The other day, my buddy at Sports Spectrum, Aaron, and I drove to Raleigh, N.C., to attend the Tenth Avenue North Classic, a golf tournament put together by Tenth Avenue North lead singer Mike Donehey and PGA Tour golfer Kevin Streelman to raise money for Christian ministries.

We interviewed Grammy-award winning artist TobyMac on the driving range right when we arrived. The guy is twice my age but 50 times more hip. When you talk to him, you feel like you’re long, lost friends, like you were fraternity brothers or something. You’d think he was 25, but he’s actually almost 50. He’s just a bro. And that’s the best way to describe him.

He was the “celebrity” in his golf group, but he was chest-bumping his playing partners and joking with them like family. On one hole, one of the guys in his group scuffed a putt and left it five feet short. Toby started singing a song called “Forgiveness” from his latest album. “We all make mistakes sometimes,” he sang, as everyone laughed.

When we interviewed him on the driving range, Toby was talking to us about songwriting.

I’ve come to decide God is big enough to be that small, to write a song through TobyMac or an article through Stephen Copeland; to love me, and live through me; to let me see my grandfather one last time and throw a star across the sky.

To burn like a candle and shine through our tiny selves.

This column appeared in the August 2013 DigiMag.