By Justin Adams Jul 26, 2017
Matthew Slater of the New England Patriots recording a video for The Increase.

New England Patriots special teams captain Matthew Slater has several reasons to smile as he and his teammates report to training camp.

The 10-year vet is fresh off the Super Bowl LI title and was named to his first All-Pro selection. But a preseason prediction from USA Today, where the Patriots were picked to finish a perfect 19-0, left Slater in stitches.

“When it comes to a perfect season, when you hear something like that, I guess all you can do is chuckle,” Slater said to the Bostonsportsjournal.com.

Slater, 31, doesn’t have his sights on a perfect record, but helping his team perform at a high level.

“It’s just so hard to even go out just being competitive in this league,” Slater added. It’s so difficult. Any talk of us doing something like that, it’s not something our team would think or talk about. Right now, we’re just thinking about going out there and stringing some good practices together.” 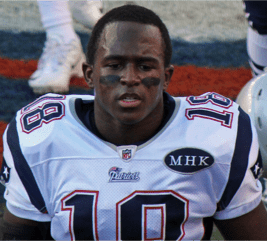 Slater’s attitude and work ethic have helped him win two Super Bowl rings, but his faith in Jesus Christ has helped him produce a foundation for life on and off the field. This was apparent in an Increase Story where he talked about being a follower of Jesus.

“To think about the love Christ has for us, to be able to give everything up he had in Heaven, as the Almighty God. To come down here to Earth and die for us, it’s just so powerful when you think about it,” Slater said.

Slater further explains the message of salvation and how God’s perfect sacrifice led him to repentance.

To view the entire Increase Story, click on the link below.