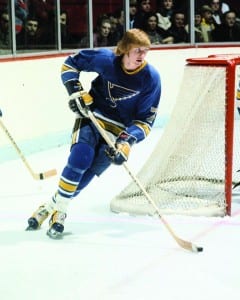 Unger’s life, though, isn’t wrapped up in hockey, although he’s been involved with hockey since his retirement. His life is wrapped up in how God has been working in his life.

Sports Spectrum caught up with Unger this year to commemorate our 30th anniversary. Below is an excerpt from that interview, which will appear in full in the next digital issue of Sports Spectrum.

When asked what he’s learned the past 30 years since his retirement, he responded: “I’ve learned that God doesn’t change. We’re the ones that put ourselves in situations, and He’s always there. He doesn’t change. He’s the same today, tomorrow, and forever. He doesn’t give up on people. Even though we go through some very difficult times and difficult things, He’s still a sovereign God and He’s still in control. I never prayed for God to get me out of a certain situation, because I never know why I’m in it or why my kids are in it or why my family’s in it or why my marriage is in it. But I pray for peace in that circumstance; that God will give me a peace about the fact that He’s not going to forget about me. I guess the older you get and the more experiences you have and the more things you go through, the more you realize that, wow, I don’t know what I would have done if that hadn’t been part of my life and my marriage and my kids and my family, all those other things. When you look back, you see how He carried you through…You don’t just get to a certain point and say, OK, everything’s ‘OK and we’re going to be fine, because something else will come up’…there’s always things that are going on that God needs to be in the middle of.”

“What I was amazed at is how easy a transition retirement was for me because I had God in my life. There were short little times when God took hockey away from me, like the time when I did full-time ministry and the time when I did retire and there wasn’t a hockey job available. The Bible talks about God giving you the desires of your heart. I’m saying to myself, ‘God, you know how important hockey is to me. Why am I, why is this getting yanked away from me?’ When I look back how He gave it back to me through the coaching, through the job in England, to all the different times where all of a sudden out of the blue a job would pop up. ‘It’s like that song:  ‘God will make a way when there seems to be no way.’ All of a sudden there was something there. Again, the peace of the fact that we tend to say, ‘OK, I’m losing my job today. Who can I call?  What can I do?  I’ve got all these numbers.’ And I’ve learned to say, ‘OK, I’m going to make those calls but probably the answer to this prayer is going to be somebody that I’ve never met before. God is going to put somebody in my life that I’ve never met before and it’s going to be totally out of the blue.’ That’s happened many, many times to me.”