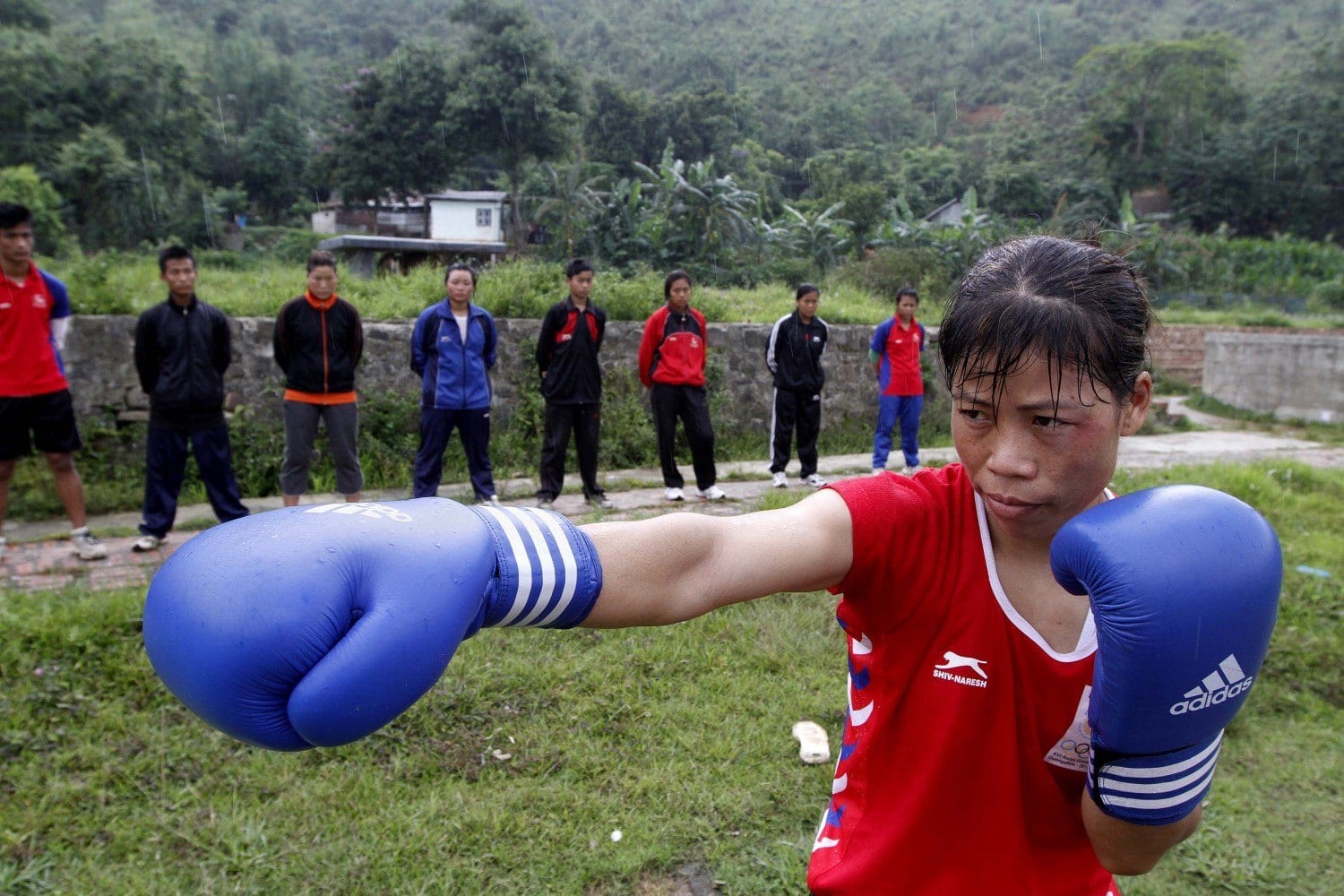 An Olympian and five-time world champion works in her garden as her husband looks on and talks to a reporter.

But this isn’t an interview for a home and garden show in America’s Heartland, the Northeast or the Deep South.

The razor wire on top of the fences (meant to keep people out, not in), the unmistakable poverty, and the armed guards dispel that notion.

It’s an interview to find out who the 31-year-old Hmangte Chungneijang (or simply Mary Kom as she is now known) is and what drives one of India’s most well-known and decorated athletes to succeed, while also remaining humble enough to feed pigs, sweep her dirt-covered yard, maintain her vegetable garden, gather firewood, and even kill poisonous snakes with her bare hands if necessary.

She and her husband, Kurong Onkholer, 40, their 7-year-old twin boys, Khupneivar and Rechungvar, and their 1-year-old son, Chungthanglen, live in Imphal, the capital of Manipur, one of India’s most northeastern states that frequently deals with insurgents. Manipur is surrounded by Bangladesh to the west, Burma to the east and south, and Bhutan and China to the north.

At her MC Mary Kom Boxing Academy, also in Imphal and about 30 miles from where Mary grew up in the poor, farming village of Kangathei, an armed guard looks on as she trains more than 30 aspiring boxers, male and female, on an open, dirt field against the backdrop of tree-stripped hills. There is no ring.

At least half of the trainees live in a house with Kom and her family, and she pays for everything – housing, food, training, whether they live with her and her family or not. Why? Because they’re poor, just like how she grew up, and she wants to give them a chance to experience success. The money to support her and her family’s goodwill comes from her job as Police Superintendent and from her monetary rewards from the government that she receives each time she accomplishes another first for a female athlete from India.

And there’s been plenty of accomplishments.

And there’s even a movie (Mary Kom, a Bollywood film released this past summer in India) and a book (Unbreakable, published in 2013) documenting her incredible life story. She was even named Yahoo! India’s first-ever Person of the Year in 2012.

Yet with all of her accomplishments, she lacked one title that no female athlete from India had ever won – an Asian Games gold medal.

Until she did so this past October.

That’s when Kom won the Flyweight division (51 kilograms or 112.4 pounds) in Incheon, South Korea, defeating Korean Kim Ye-ji in the preliminaries, China’s Si Haijuan in the quarterfinals, Vietnam’s Lê Thị Bằng in the semifinals and Kazakhstan’s Zhaina Shekerbekova in the final.

The elusive title could arguably rank higher on her list of accomplishments than her Olympic bronze medal because of what she had to overcome to even make it to the Asian Games.

A little more than nine months after the Olympics, in May of 2013, she gave birth to her third child by C-section. Five months after that, in September, she had surgery to remove gallstones. Having both procedures translated into missing 18 months of training.

Kom, with less than eight months to train for India’s National Championships this past May, lost a controversial decision to a younger boxer, 24-year-old Pinki Jangra. The defeat cost Kom a spot on India’s Commonwealth Games boxing squad.

With a renewed focus, and, most importantly, time to heal and train, Kom came back in the Asian Games trials and easily beat Jangra, who had won a bronze medal at the Commonwealth Games just 25 days earlier.

“The comeback was not easy – plenty of hard work and sacrifice went into it. I didn’t have a choice,” Mary told Friday, a magazine in the United Arab Emirates, after winning the Asian Games title. “I just had to win or I perhaps would never have been able to make a comeback.”

“Sometimes I have to make people stop talking. When I started, they said boxing was not for girls. They said I couldn’t win after I got married. After I had a baby, they said I wouldn’t be able to win… So I want to prove, I want to show that I can make history for India.”

Her next historical marker she’ll go after will be when she tries to become the first woman from India to win an Olympic gold medal, what she hopes to accomplish at the 2016 Rio Olympics and what she has indicated could likely be her last match. 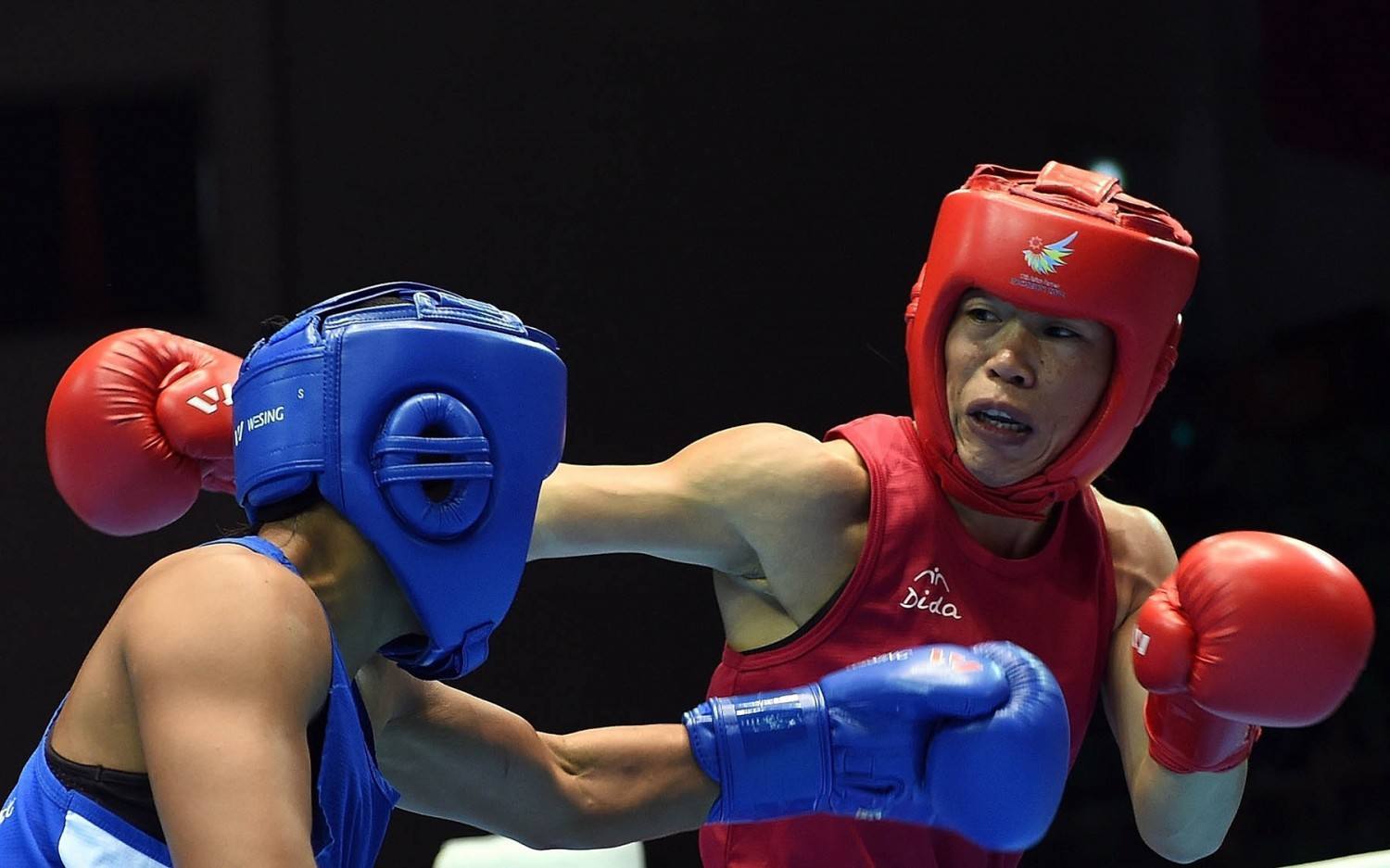 But Kom’s story is more about overcoming, as seen in her comeback after nearly two-years away from the sport, than all the titles, medals and honors that she’s accumulated or hopes to accumulate.

She grew up in Kangathei, a poor, remote, farming village of about 300 people who constantly live with power outages, rationing of essentials, and reside in an area surrounded by razor wire fences for protection. Kom’s father-in-law was murdered by militants in 2006, and the violence in the area by rebels and local criminals in Manipur is well-known in northeastern India, where even Kom has to be guarded by gun-toting police.

Besides overcoming how and where she grew up, Kom defied the odds of even competing in boxing in a country where the culture makes it difficult for a woman to even participate, let alone succeed, in sports.

Part of what drives her so much each day was revealed near the end of her book when she quoted I Corinthians 9:24, “Do you not know that in a race all the runners run, but only one gets the prize? Run in such a way as to get the prize.”

Living in India as a Christian also magnifies difficulties because persecution is prevalent in various parts of the country (only 2.3 percent of the population are Christian compared to 80.5 percent Hindu and 13.4 percent Muslim).

Even though she doesn’t follow the majority, as far as India’s religious beliefs are concerned, nearly her entire village and the Komrem people (which number about 35,000 and until recently included the Kom tribe, which number less than 20,000) has converted to Christianity. And for several generations, her family has worshipped at Kangathei Baptist Church.

But Kom’s boldness and dedication to her faith outside the ring equals her boldness and dedication of her faith inside the ring. Once, she wore a boxing gown that had “Jesus 100 percent” on it, and she changed her name to Mary to identify with her Christian faith because Mary was the mother of Jesus. It was a name that was “…closest to her heart after Jesus.” wrote Yahoo! India, and she told Reader’s Digest India, “I wanted a name that was easier to pronounce and I chose Mary because it shows my faith as a Christian.”

Also, she uses nearly every interview and relationship with other boxers to share her faith.

One India Today reporter noted during the London Olympics, “She made it a point to thank God. She believes firmly in Jesus Christ and has no hesitation in invoking Him before any bout.”

Ireland’s Olympic boxing gold medalist Katie Taylor told the Irish Times in November, “She has been a hero for every female boxer around the world. What she has done for women’s boxing is incredible and everyone looks up to her. I’ve met her loads of times and we’ve had great conversations. She’s a Christian as well and we’ve spoken about that.”

And that says a lot coming from Taylor, who not only has won Olympic gold, but has won six European titles, five European Union titles, and whose goal was to equal Kom’s record of five World Championship golds, which Taylor did in November. 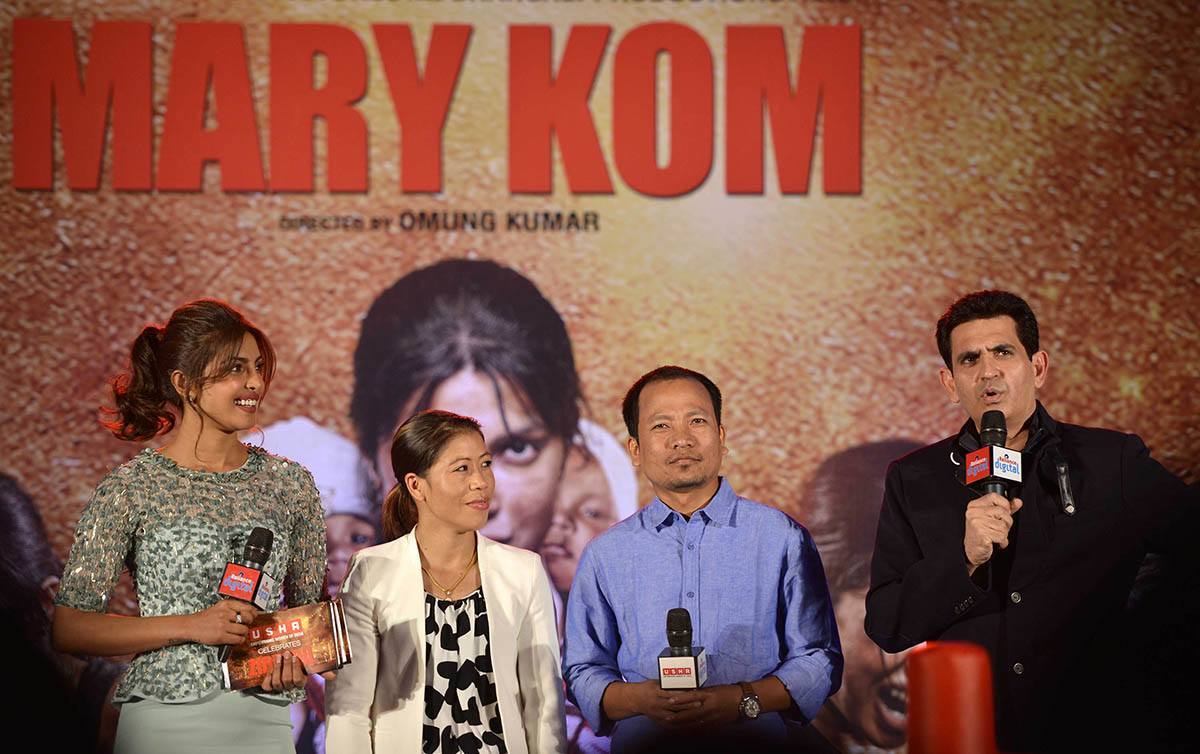 Boxing may be how people in and outside of the sport came to know Kom, but her faith is why they know about her boxing – it has driven her and helped her in victory.

It’s a faith that was encouraged by her father and instilled when she first started boxing.

“I know how you fight in the ring, but no matter who wins you must part with your opponent in grace,” her father, Tonpa, told Yahoo! India concerning what he once told his daughter. “Give her a warm hug and forget what happened. Off the ring, you must love one other.”

His advice has been something that has continued to guide and help her remain humble, as seen by how she prays.

“Protect me, God, because now people see me as a celebrity,” Yahoo! India reported her praying as she covered her eyes with her hands and prayed at church. “I’m not a celebrity. I’m still Mary Kom. I want to live a humble and sincere life.”

Each Sunday, just like she did when she had little in the form of money and possessions, she attends church, and fasts and prays until noon.

Her life, exemplified by a relentless pursuit to achieve, could be summed up by her favorite Scripture, Matthew 7:8, “Ask, and it shall be given you; seek, and ye shall find; knock, and it shall be opened unto you.”

She understands, though, that God ultimately holds the outcome of anything she achieves, especially as she continues to prepare for the 2016 Rio Olympics.

“I remember the story of David and Goliath,” she told Reader’s Digest India. “David is so small – how will he kill Goliath? I am small too. Manipur is a small state. If I pray and work hard, I too will win an Olympic gold, but that isn’t in my hands alone. It’s up to God. I will give it my best, whether that happens or not.”