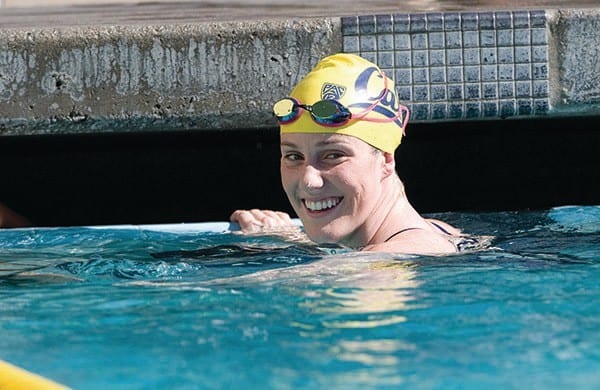 She’s just doing it a lot more out of the spotlight.

Swimming is one of those sports where athletes go into relative obscurity after each Olympics, yet still compete in high-level meets in between the once-every-four-year spectacle.
Franklin is a perfect example.

As a 17-year-old high school student, she won four gold medals and one bronze at the 2012 London Olympics, while also setting a world record in the 200-meter backstroke and earning World and American Swimmer of the Year.

But she didn’t need the spotlight to keep winning.

Quietly, and away from the nearly 220 million American viewers who watched the Olympics, she followed her London Games performance by winning four events at U.S. Nationals and also six gold medals at the 2013 World Championships in Barcelona. Two months later she won the Sportswoman of the Year at the 34th Salute to Women in Sports Awards in New York in October.

The world acclaim didn’t make her less hungry as an athlete, though, as she continued her success as a collegian, where she has added to her international medal haul while also beginning an impressive college résumé.

At the 2014 PAC-12 Championships, she earned Swimmer of the Meet after winning three individual events in meet records, swimming on three winning relays and taking runner-up in another.

Two weeks later at the NCAA Championships, she won an NCAA title and set an American record in the 200-yard freestyle, while also anchoring the 800 freestyle relay to a come-from-behind victory after being down by 2.5 seconds going into the final leg. She was second in two other events, third in two more and fifth in another. All of that catapulted her to PAC-12 Freshman of the Year.

Before she could barely take a breath, though, she was given the Oscars of sports—the Laureus World Sportswoman of the Year (for her 2013 performances) on Mar. 26, 2014, in Kuala Lumpur, Malaysia.
But “Missile” Missy, as the Denver Post headline proclaimed while the London Olympics were getting underway, wasn’t finished with 2014.

She won one gold, two silver and one bronze at the Pan Pacific Championships in Gold Coast, Australia, from July 28-Aug. 4. Then on Nov. 24, Franklin, along with Katie Ledecky, Leah Smith and Shannon Vreeland were given the Golden Goggle Award for Relay Performance of the Year for their 4×200-meter freestyle gold-medal victory in Australia.

Things are just getting underway this year, though.

The spotlight, winning and acclaim can be a lot for anyone, but especially someone who is still just 19 years old (she doesn’t turn 20 until May) and has already had a documentary about her (Touch the Wall was released in November).

But keeping a healthy perspective can be attributed to a life-changing event Franklin’s junior year in high school.

“I attended Kairos with my Regis Jesuit sisters and it changed my life forever,” Franklin told beliefnet.

“I now really work on keeping my faith strong.”

Part of doing that is honoring God by remembering that He gave her the talents she has wowed so many with the last few years.

“God is always there for me. I talk with Him before, during and after practice and competitions,” Franklin also told beliefnet. “I pray to Him for guidance. I thank Him for this talent He has given me and promise to be a positive role model for young athletes in all sports.”

This story was published in the Spring 2015 print issue of Sports Spectrum. Log in HERE to view the issue.