Where Are They Now? Closeup: Tom and Terry Brands 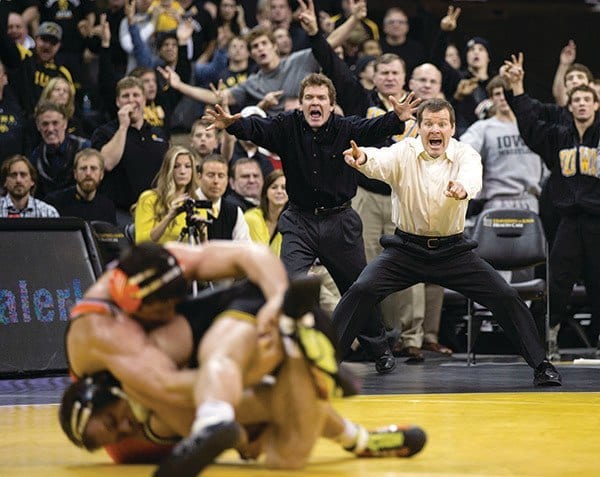 But more than a cliché, twins Tom and Terry Brands are living proof that it’s true.

When the Brands were wrestling for legendary University of Iowa coach Dan Gable in the early 1990s, their fierce and relentless style was physically punishing to opponents and helped them combine for five NCAA individual titles (Tom won three, Terry two) and seven All-American honors (Tom with four, Terry three), while also leading the Hawkeyes to two NCAA team championships in 1991 and 1992.

In between their competitive wrestling careers and coaching stints, they were inducted into the National Wrestling Hall of Fame (Tom in 2001, Terry in 2006).
Their winning attitudes and reputation as athletes easily carried over to their coaching at traditionally rich Iowa, which had 20 national team titles before the Brands added to that haul after leading the Hawkeyes to three national titles (2008, ’09, ’10) and four more finishes of either third or fourth since the 2006-07 season.
Once again, they have the Hawkeyes challenging for a title.
Iowa has remained atop the USA Today/NWCA Coaches national poll this season as this year’s NCAA Championships in St. Louis (March 19-21) approach.
But the brothers’ success isn’t only related to a legendary coach and a storied program.
There’s a spiritual aspect, as well, and it doesn’t mean they’re soft on or off the mat while guiding the Hawkeyes to the top.
“The way we are on the mat, that doesn’t change,” said Tom during a talk he gave at the University of Iowa Hall of Fame a few years back. “When you understand the relationship with Jesus Christ, I don’t think you have to dummy-down the physicalness of a sport meant to be physical.”
Added Terry: “Another way to say it is, ‘meekness is harnessed’ power. People don’t think of it that way. They just don’t. I didn’t either until I had it explained to me that way.”
“When you enter that realm or that wrestling room (at Iowa), you are held accountable to the principles and standards of that coaching staff and that program,” Tom said. “And to a certain degree, that tradition, because Gable influenced me as a coach. And now we’re carrying that forward…You have to get better every day. That’s a Gable philosophy and a biblical principle, in that you don’t let a day go by without working on your relationships…what I’m talking about is relationships with God and Jesus Christ and professing…your love for Him.”
Added Terry, “It’s about representing yourself to the best of your ability for the glory and honor of Jesus. That really is my mission, what we’re commanded to do, in everything we do. It’s not just when people are watching, but all the time.”