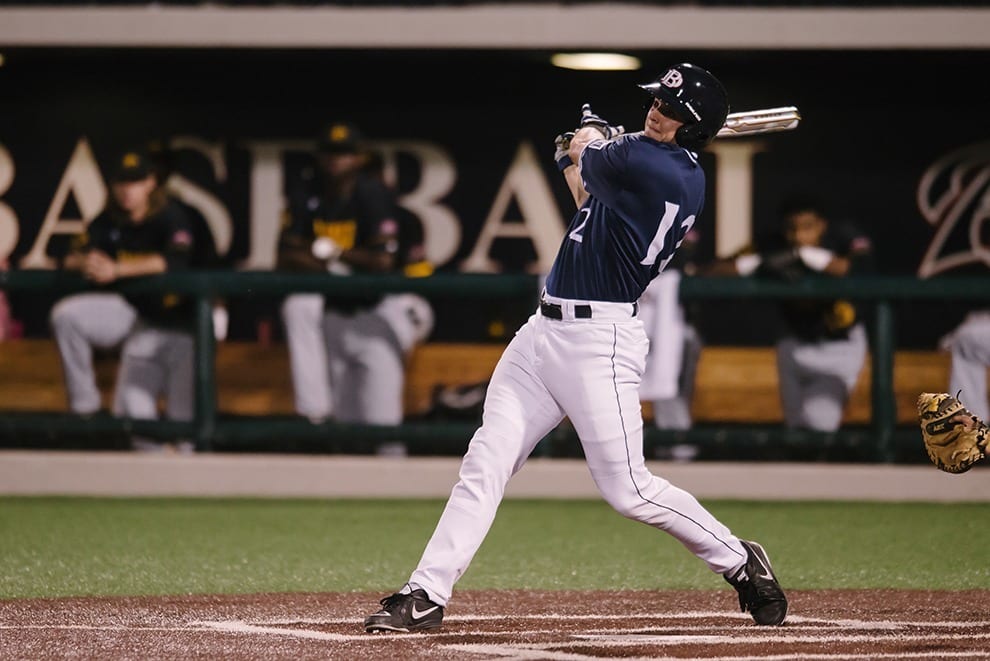 Every curve ball Daniel Salters turns on during batting practice or digs out of the dirt during his time as the catcher for the powerhouse Dallas Baptist University baseball team, he thinks about the curves he has already been thrown in life.

Born to missionary parents, John and Pearle Salters, Daniel spent much of his youth in Africa where his parents worked for Africa Inland Mission. He flew with his dad in single- or twin-engine Cessnas to supply missionaries with needed supplies, in spreading the gospel of Jesus Christ in the bush and villages of Kenya and Tanzania.

He heard of friends who crashed their planes during gospel mission flights, had an armed intruder break into their missionary compound in Nairobi, Kenya, looking for valuables, but the biggest rejection Daniel received was when he tried to bring up baseball with his African friends.

“They had not heard of it, none of them. All they cared about was soccer,” he says. “Seeing how little they had and how much they needed gave me a new perspective on life. We have so much here, we have the nicest baseball facilities at DBU, but it gave me an insight on what is really important.

“They didn’t have anything there and we didn’t have much, but still more than them. My parents told me to always put Christ first and that is what I have always tried to do. Baseball is full of ups and downs, but I’ve learned to trust God in all ways and in all times.”

For many outside observers, what’s really important is predicting if Salters will join the latest line of major league baseball players from Dallas Baptist. Already Ben Zobrist (Tampa Bay), Vic Black (New York Mets), and Ryan Goins (Toronto) are in the majors from the program which has produced four recent NCAA regional baseball appearances.

Salters, 21, was selected in the 22nd round earlier this year by the Washington Nationals, but chose to return to school for his junior season to improve his baseball skills, his future draft position and live out his life as a light to friends and opponents.

“One of the reasons we always work out so much and play so hard is we want to show people that Christians can compete as hard and as successfully as anyone,” he says. “The Bible says run to win the race. Coach says we should be the hardest working team we ever play and that’s what we’re trying to do.”

John Salters returned to America in 2006 and now lives in his hometown of Eufala, Okla., where he still works as a pilot and serves as a volunteer youth minister at North Fork Baptist Church. He says he can see his son’s humble missionary background and Christian focus in every trip to the plate.

“Being here in America, we take a lot of things for granted. But for us (and Daniel) we have a bigger vision to live beyond baseball and that’s what we try to do here,” John says. “Our responsibility is to make disciples of all men no matter what we do. God may call us back to the mission field, but we need to serve Him in all ways.”

This summer in the Northwoods wood bat league in Wisconsin, Salters was named Summer Collegiate All-American by Perfect Game in 2014 and Baseball America named him one of the Top 10 Prospects in the Northwoods League.

What makes Salters unique among many of the players he plays with and against, and one thing that has the major league scouts so interested, is that he has only played the game competitively a few years, compared to others who have played nearly their whole lives.

When he returned to Oklahoma at age 13, he had some soccer skills from his years in Africa, but he had never played a full season of organized baseball and had never spent any time as a catcher.
“I didn’t even know what that was in high school, but my coach suggested it and said major leagues are always looking for good catchers. Now I love the position and wouldn’t want to do anything else,” Salters says. “I love to hit and play in the field.”

In his sophomore year at Dallas Baptist last spring, he helped lead the Patriots to a 41-20 record, their first Missouri Valley Conference title, and another berth in the Fort Worth NCAA regional where they fell to College World Series participant TCU.

He hit for a .251 batting average for Dallas Baptist, but started every game as catcher with six home runs, 43 RBIs and most importantly to the pro scouts, 15 runners caught stealing.

“The sky is the limit for him,” Dallas Baptist head coach Dan Heefner was quoted this summer after watching him play in the Northwoods league. “We’ve had a bunch of players drafted out of our program and make it to the major leagues, and Daniel’s right there as far as his work ethic, character and talent level.”

After one year at an Oklahoma Junior College, Heefner discovered Salters and offered him the chance to play at Dallas Baptist, which mixes top-level NCAA competition with Christian morals, ethics and faith on and off the field.

“My life verse is Colossians 3:23. We want to show others how we work and that Christians are not weak,” Salters says.

His mother, Pearle, still works in the Member Care Department of Africa Inland Mission from their Oklahoma home and his dad still flies and spends time working at their hometown church. Daniel returned there during the holidays to spend time with family and minister to others.

“My goal is to play in the major leagues, that’s what I want to do, but I know I want to honor God in whatever path He leads. My priorities are to honor Him in whatever I do.”

No matter how many curve balls come his way, on and off the baseball field.

Art Stricklin is a long time contributor to Sports Spectrum. This story is taken from Sports Spectrum’s Spring 2015 print issue. Log in HERE to view the issue. Not a subscriber? Subscribe HERE to receive eight issues of Sports Spectrum a year.