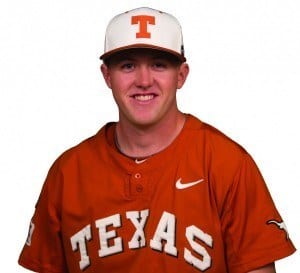 James Barton’s college baseball career is proof God is always working in our lives, whether it’s the way we envisioned or not.

On any given spring day, his name was inked on multiple leaderboards in the local Austin-American Statesman newspaper. He topped the area in hitting as a sophomore, led in doubles as a senior and was named to the all-state tournament team his final year behind the plate for Hyde Park Baptist High School.

The three-time team captain was no stranger to success on the high school diamond, and intended to continue his career on the collegiate level.

He originally planned to attend and play at Baylor University, but felt God was calling him elsewhere. Lamar University offered him a significant scholarship. He received smaller offers to other schools. None, for some reason, were the right place.

School-less after his senior year, the University of Texas was not even on Barton’s radar. The Longhorns had long since signed two catchers his age, leaving no room or opportunity for a third.

When the 2012 Major League Baseball draft rolled around, though, both were drafted high—and both signed pro contracts.

“I got a call from a coach,” Barton remembers, “telling me that if I played well in a summer tournament coming up in Lubbock, I’d probably get an offer at Texas.”

One strong tournament showing later, the coach’s tip proved to be true. On July 1 following Barton’s senior year, he received and accepted an offer to play for the Longhorns.

“It’s crazy how my situation worked out,” Barton, now a junior, says. “God’s hand was all over that, and I didn’t know why. I knew I was supposed to come here, though, beyond the shadow of a doubt.” 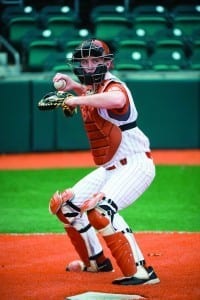 A strong Christian, Barton believed the Lord had him at Texas—the country’s largest public university, known for its party scene—for a specific reason.

“There’s a verse that says to do everything unto the Lord and not to man,” says Barton, referencing Colossians 3:23. “I fully take that to heart and believe that, and when I first came [to Texas] I just prayed for one other Christian on the team to help me learn how to apply that to Texas baseball.”

His answer came in the form of senior catcher Patrick Marsh.

Marsh played a part in starting up a team Bible study in the fall of 2010, partnering with Campus Crusade for Christ to establish a weekly meeting for interested teammates.

“He was the one other Christian, and he invited me to start coming to Bible study,” Barton says. “At the time it was me, Patrick and one other guy; and Patrick mentored me and discipled me in the realm of college baseball. I don’t really know where I would have headed spiritually if not for him. He showed me that you really can combine baseball and God at the University of Texas.”

Encouraged by Marsh and convinced his roster spot was a calling, Barton sought to play ball with purpose.
“I thought, short-sightedly, that God had brought me here just for baseball,” Barton says. “I thought I was going to succeed on the field abundantly, because He opened all those doors. I think that was kind of selfish and immature of me, in hindsight, to think that was the reasoning.”

In fact, Barton’s time on the field has been limited.

“I’ve seen brief action pinch-hitting, a few at-bats and gotten one hit ever,” Barton relays. “But I got to go to Omaha for the College World Series, and my sophomore year we finished third in the nation, which I’m super proud of. I’ve lettered twice, been a full-time travel member and I’m hoping to play all four years. I love it here. I love the team.”

And the team loves him. Barton’s genuine charisma and natural leadership gave him instant impact on the team and in the locker room.

“James has a heart for people,” Marsh says. “He loves peoples’ hearts, and he wants to get to know people. I think that’s what our Lord Jesus is about—getting to know people’s hearts, how they’re doing, what they’re struggling with, how He can support them and love them. God has done that on our team through James and the relationships he has built.”

“I think athletes are the hardest group of guys to reach spiritually if you’re not one of them,” Barton states. “That might sound a little cynical, but unless you’re in that environment, you don’t understand. You have to have credibility with those guys before they’ll ever open up to you. If you are literally in the trenches with them, up at five every morning, working out, sweating and bleeding together, it really establishes a sense of openness with each other that is unlike anything I’ve ever experienced.” 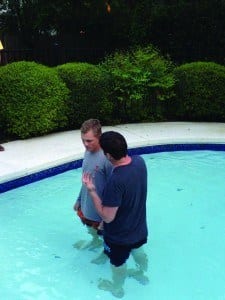 Through that openness, Barton shared his faith with his teammates. He came alongside Marsh and helped plan a Bible study each week, inviting their teammates along the way.

“We prayed every week that God would just multiply our three to six. That would have been the biggest deal in the world,” Barton remembers.

The group met in apartments or, often, Barton’s parents’ home. They shared a meal, prayed for one another and then dove into their lesson for the week.

Countless prayers and one year later, 32 Texas baseball players (out of the 35-man roster) were gathered to celebrate the salvation of one of their seniors with a baptism in the Barton family’s backyard pool.
“I tell people, for real, that unless something better than that happens,” Barton pauses, his smile wide with the memory, “that will be my most proud, greatest moment of college.

“It’s not going to Omaha. It’s not getting to hit. It’s watching one of my best friends get baptized in my family’s pool after seeing his faith walk for a year and a half and how the Lord turned him upside-down. It’s unbelievable. It’s awesome.”

Since Marsh’s graduation, Barton has taken leadership of “baseball Bible study.” The catcher has turned the sport he loves into a full-time ministry.

“It became super clear to me my sophomore year that the reason I’m here is to do ministry on the baseball team,” Barton says. “I’m a missionary on the baseball team. I’m not here to hit homeruns—though that’d be cool, if I ever got the chance to do that again—I’m here to witness to these guys. There is no other way to explain how I ended up at Texas as a late senior sign than the Lord putting me here for this reason, and I fully believe that.” 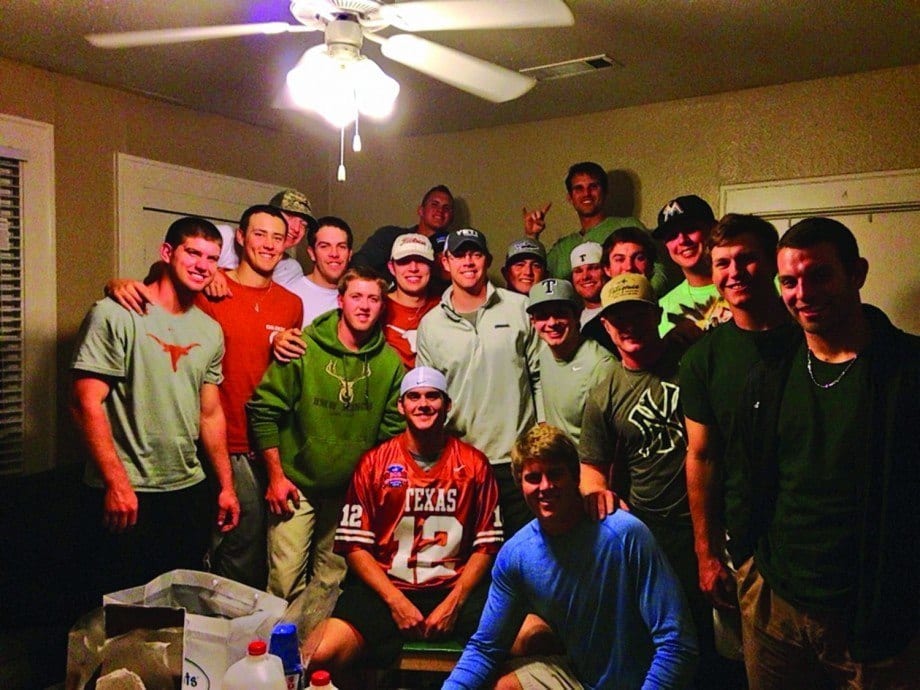 With more than half the team now regular Bible study attendees, Barton has seen a culture change in the clubhouse. Players pray before games together, do devotionals on the road, and faith has become an open topic of conversation within the team.

When the first pitch of any game is thrown, the focus becomes playing hard and well to glorify God; and most of the team attributed their late-season success and College World Series push in 2014 to the Lord, as well.
“I’d say over half our team is professed, Christian men who really do strive to live for the Lord,” Barton says. “When you’ve got that huge chunk of guys, it can’t help but trickle over to the field.”

Even so, Barton’s missionary role isn’t always easy or natural. Beyond the normal pressure of living a lifestyle in stark contrast to the vast majority of those around him, Barton has struggled with the extreme accountability that comes with ministering to guys he is with constantly.

“Being one of the guys makes you credible, but it also means they see all parts of you,” he explains. “That’s probably been the hardest part for me in college—how I behave, because my teammates are always there. I used to be overwhelmed by it and feel kind of cheated, like I couldn’t have any fun and couldn’t ever mess up.”

Instead, Barton says the situation has taught him about the importance of grace for himself and for others alike. He is not perfect, but he strives to set himself apart; and though Barton will be last to say it, the impact his efforts have had on the team is clear.

“I’ve seen the way God has used a lot of these guys who are far more successful on the field than I am, though—huge, star players wearing cross wristbands, talking about God in their interviews and talking about Bible study,” Barton says. “In all these things, God has gotten to glorify Himself, and it’s so cool. I love it.”

Barton’s college baseball career may have been a curveball, but his time and role with the University of Texas have proved his biggest win yet.

Ryley Rush is a student at Liberty University and contributor to Sports Spectrum. This feature was published in Sports Spectrum’s Summer 2015 print issue. Log in HERE to view the issue. Not a subscriber? Subscribe HERE to receive eight issues of Sports Spectrum a year.