For many people, a diagnosis of spina bifida would mean that competing in any sport may be a challenge. Yet for sixth-grader Liza Robbins, this was a challenge she gladly accepted.

Spina bifida is “a birth defect that occurs when the spine and spinal cord don’t form properly.” Liza is unable to walk without crutches.

Even though spina bifida impedes Liza’s ability to compete in sports with some of her friends, groups such as the Bennett Blazers allow her to live the life of any other sixth-grader. The Bennett Blazers — part of the Kennedy Krieger’s Physically Challenged Sports Program in Baltimore, Maryland — focus on helping children who are physically disabled overcome their disabilities through sports. 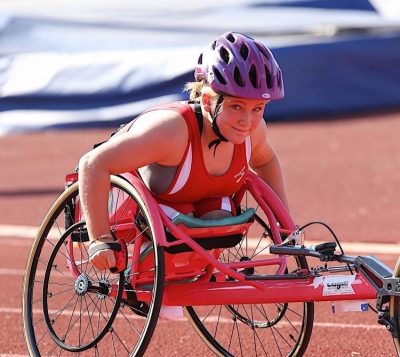 Amy Robbins, Liza’s mother, told Sports Spectrum that she found out about the Bennett Blazers through friends.

“We wanted Liza to learn how to swim at first,” Amy said. “She started with swim lessons and the coach was teaching her swim and she said, ‘You should stay this afternoon and try tennis and softball and some other stuff.’ She didn’t really want to at first, she just wanted to swim, but we got her to stay and watch and she got interested.

“Now, we’re pretty much down there almost every Saturday doing multiple sports. They do track, swim, basketball and she’s done a little bit of softball, tennis, lacrosse. They kind of just introduce kids to all kinds of sports but her favorites are basketball, track and swim.”

Through the Bennett Blazers, Liza can compete against others who are facing the same challenges she is.

Over this past summer, Liza traveled to Denver, Colorado, for the Move United Junior Nationals, where she competed in several events ranging from swimming to track and field. While she can’t run like some other children her age, she still competes with a track chair. Liza did admirably, winning three gold medals and a silver in swimming events, as well as a bronze medal in track.

While her family was undoubtedly ecstatic that Liza performed so well, they realized that ultimately it doesn’t matter how Liza matches up to the competition. Instead, it’s how she competes compared to her potential.

“She got a personal best in everything,” Amy said. “Her coach and we always tell her, ‘It’s about beating yourself, not necessarily beating the other kids.’ It’s nice to win medals, which she did win some medals, but it’s all about bettering yourself and racing against yourself. It was really exciting. She had one really exciting race where she came in third in the 800 (meters) and it was close. She pushed hard in the last half lap and came really close but she got third. It was great.”

Part of what has allowed Liza to overcome the limitations of spina bifida is her relationship with Jesus, a relationship that began when she was only about 4 years old. 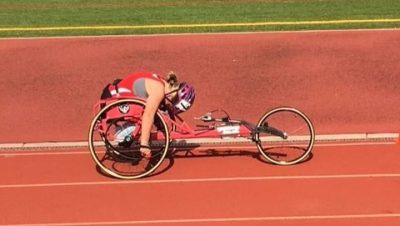 “I do my best and I just know that God made me the way I’m supposed to be, and however it goes is the way it was supposed to be,” Liza told Sports Spectrum.

Amy also spoke about how seeing Liza continue to surpass her previous records serves as a testament to her faith.

“It’s just cool to be able to see her compete, not knowing when she was little what she would be able to do or if she would be able to run or walk or swim,” Amy said. “The fact that she can get into a pool and swim laps is amazing. She runs in a track chair. When people ask me, ‘Oh, does she run?’ I’m like, ‘Yeah, she runs. She just runs differently.’

“I think just knowing God has a plan for her and we don’t have to worry about it [is comforting]. She’s perfectly exactly how He planned her to be.”

As track and swim season come to an end, Liza begins to prepare for her next sport: basketball. No matter what lies ahead, Liza knows that everything she does is for God’s glory.