Pickleball — a mix of tennis, pingpong and badminton — is now the fastest-growing sport, boasting more than 4.8 million participants nationwide. It’s claimed the “fastest-growing sport” title the last two years, according to the latest data from the Sports & Fitness Industry Association.

It’s played on courts looking similar to those in tennis, but the size of badminton courts (20 feet wide by 44 feet long). Players use wooden paddles and a wiffle ball. It has long been popular among those of retirement age, but the demographics continue to trend younger. Like many recreation sports, it’s a way to compete and meet people.

It’s also being used as a way to spread faith in God.

Such is the case for Tennessee resident Stephanie Lane, who has competed in seven USA Pickleball Association Nationals, the highest competition for pickleball players. Before pickleball, Lane played tennis in college, where she was first introduced to this new game.

The Nationals are held for all ages and Lane says the events are where players get to meet people from all over who compete at the same level.

“We have every skill level under the sun, every age,” Lane told Sports Spectrum. “But it’s not as concentrated as far as certain skill levels unless you go to certain parts of the country that make sense.”

Competing at the national level, Lane says, requires the ability to be a versatile player.

“But now if you don’t have both — if you can’t dink the ball soft and drive it like almost like a pro tennis player — you’re not going to win a high-level tournament. You’ve got to have both the hard and the soft game,” Lane said.

And it’s at those national tournaments where Lane has been able to connect with other believers all over the country.

“When I’m playing the Senior Pro Tour, I’m traveling and playing tournaments and watching my daughter who plays at the 5.0 level now. And so [believers] just kind of migrate to each other. We’ve even had faith gatherings just for people to kind of share what’s on their heart,” Lane said.

For Lane, her relationship with God has grown through learning how to balance her priorities.

“God is just at the top of all that,” she said. “Pickleball has helped me put things in perspective. I can see how I was probably off balance at the beginning of it when I poured my whole life into it — which everybody would go, ‘Well, you still are.’ And yes, I am, but I know that my priorities are my faith first now.” 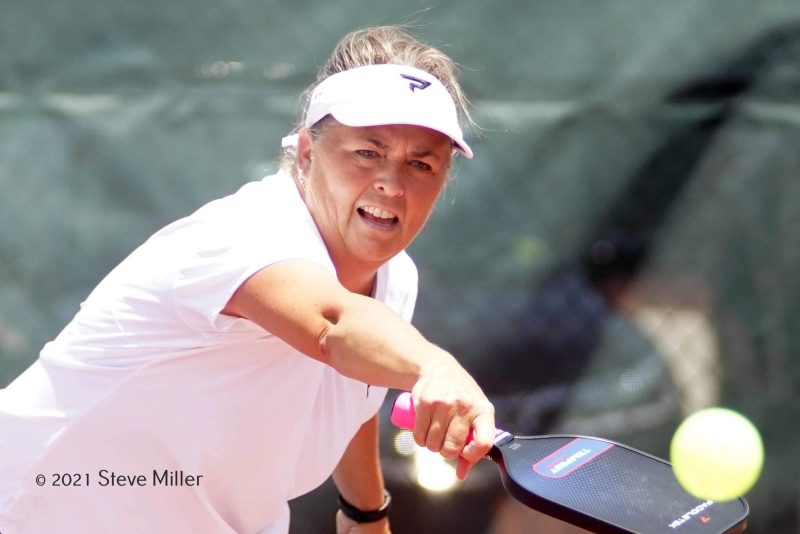 One of the many connections Lane has made through pickleball on the local level is with Stacy Lynn Harp, another former tennis player. She was searching for a community to belong to after moving to Tennessee. Harp first learned how to play at her local recreation center, and it led her to write a book, “Pickleball Faith: Inspiration on and Off the Court.”

Harp’s pickleball playing experience has led her to experience God’s grace through convictions on and off the court.

“My faith compels me to move and be obedient to the Lord, and it compels me to be a better person on the court because the relationship is the cure,” Harp said.

Through relationships Harp made on the court, she has met others who have challenged her to become closer to God through prayer and convictions. The wife of one of Harp’s pickleball friends was struggling with a health issue and approached her asking for prayers. Harp said she would pray, but moved on with her day at the courts without doing so until another friend challenged her to pray with her the next time their friend’s wife came to the courts.

“And of course, I prayed that she wouldn’t show up for a couple weeks, you know, that I would never see her again. And then eventually she showed up and I was like, ‘OK, Lord, I told You I would go pray for her.’ I went and I prayed for her and she got healed,” Harp said.

Pickleball has shown Harp how to be bold in her faith while also providing her with a community. The players are close, literally, on the court, but being a game centered around building relationships, they often grow close off the court too.