Pittsburgh Pirates manager Clint Hurdle will continue to call the ‘Steel City’ home for the near future.

Hurdle, 60, signed a four-year contract extension with the Pirates that will keep him in the dugout through 2021, according to MLB.com. The Pirates also extended the contract of general manager Neal Huntington through 2021 as well.

“I am extremely pleased to be able to announce that Neal and Clint will continue to be Pirates for at least the next four years. Both men are selfless leaders who have made us a far stronger organization, both on and off the field,” said Pirates team president Frank Coonelly to MLB.com. “Neal and Clint have embraced the challenge of building a winner in Pittsburgh and have been critical to the success that we have had here to date. We have much work to do to reach the heights that our fans deserve. I am excited to continue to work with Neal and Clint to help bring a World Series championship back to Pittsburgh.”

Hurdle has a 575-534 record in seven years with the Pirates. He was hired before the 2011 season and led the Bucs to the postseason three straight times from 2013-15, ending a 20-year postseason losing streak. Before working for the Pirates, Hurdle managed the Colorado Rockies from 2002-09, compiling a 534-625 record and leading the 2007 club to the World Series.

During his career, Hurdle has been strengthened by his Christian faith. During Faith Night in 2013, Hurdle shared with fans that he starts every day by reading 2 Chronicles 16:9, “The eyes of the Lord search the whole earth in order to strengthen those whose hearts are fully committed to Him.”

Hurdle was interviewed by Sports Spectrum in 2013 and spoke about how he has been challenged in his faith beyond the diamond. 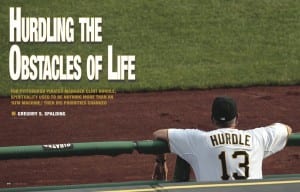 “My faith was more comfort and convenience instead of courage and conviction,” Hurdle said. 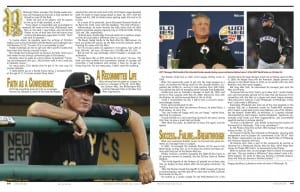 To read the entire article on Clint Hurdle’s faith, click below.

Hurdling The Obstacles of Life

At 66-72, the Pittsburgh Pirates sit in fourth place in the NL Central Division and 7.5 games back of the final wild card spot.