He was dubbed the “silent captain” by his former legendary teammate Ted Williams. Doerr played 14 seasons with Boston from 1937-1944, and 1946-1951. He missed the 1945 season due to service in World War II. He had a .288 lifetime average, helping the Red Sox to an AL pennant and a trip to the 1946 World Series. In the first All-Star Game played at night he hit a three-run homer and 35 years after retiring from MLB, he was inducted into the Baseball Hall of Fame in 1986.

“Bobby Doerr was part of an era of baseball giants and still stood out as one himself,” Red Sox owner John Henry said in the statement. “And even with his Hall of Fame achievements at second base, his character and personality outshined it all. He will be missed.”

Doerr is the only Baseball Hall of Famer, ever to live to the age of 99. 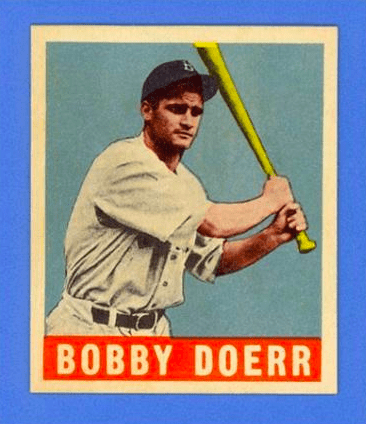 Doerr’s faith in Christ was strong, and in an October 2012 article, he talked about where that

“Looking back, I’ve been blessed in so many ways,” Doerr told Sports Spectrum. “In my younger years we went, but I wasn’t too much on church. I’d wonder, like everyone else, ‘What’s life about?’ I said prayers every night, but it was mostly to be a better ballplayer.” What stirred his interest, however, was Cecil B. DeMille’s 1927 silent movie classic, King of Kings. “The gospels came to life—it was all real—and moved me to pick up the Bible and read the story of Jesus for myself.”

In the following years, Doerr’s Christian convictions grew. “My father-in-law, Don Terpin, studied the Bible. I loved Monica (his wife), and she came from a very religious family. During the 1930s Dust Bowl, they moved from the Dakotas to Oregon (where we met), and had a lifelong spiritual influence on me.”

In the 1960s, Monica, Bob and his parents were baptized together in Junction City, by pastor and friend Ben Vegors.

Click below to read more about Doerr’s faith journey from 2012.