The seeds for many professional athletic careers are planted by childhood dreams of glamorous moments like making the major leagues or winning the World Series. However, the fact is that an exceedingly small percentage of athletes will realize these dreams.

In Michael Schlact’s case, those boyhood dreams of pulling on a big league uniform came to a quiet end with no fanfare in Amarillo, Texas. But as Schlact later discovered, a meeting in a coaches’ office at a ballpark in Amarillo was him being directed toward the next chapter in his life, which God had been carefully preparing him for all along.

Baseball was a high priority for Schlact from a young age, but so too was the concept of faith. Born in Marietta, Ga., Schlact was born Jewish and had his Bar Mitzvah at age 13. The traditional Jewish ceremony signifies the coming of age for Jewish boys, who from that time forward are regarded as a man in the faith.

Starting at around age 15, Schlact became curious about Christianity.

“I became interested in the Christian faith through watching my girlfriend, Jillian, and her parents,” Schlact said. “They would go to church every week, and they would pray consistently. We started to talk about it and I asked a lot of questions trying to dig a little deeper into what Christianity is about.”

The interest grew, and at age 16, led to a decision.

“Jillian and I were invited to a church camp in Florida in the summer of 2002, and I went with the intention of investigating Christianity more,” Schlact said. “From the minute I arrived at that camp I knew there was something different about these people and felt God’s tug on my heart. I gave my heart to Christ there.”

Two years later, the Texas Rangers drafted Schlact out of high school in the third round of the 2004 MLB Draft. He signed with the Rangers and began his professional career at 18 years old with the club’s rookie-ball affiliate in Arizona.

“I had never left home and was leaving everything I knew,” Schlact recalled. “I was incredibly homesick and had a choice to do one of two things: I could either get overwhelmed about being homesick and not knowing what I was doing, or I could really rely on my faith.

“I had faith in God before, but I hadn’t really leaned on it before because there was no adversity; I thought I could do it all on my own. I was being stretched; I had never made major decisions on my own,” Schlact said. 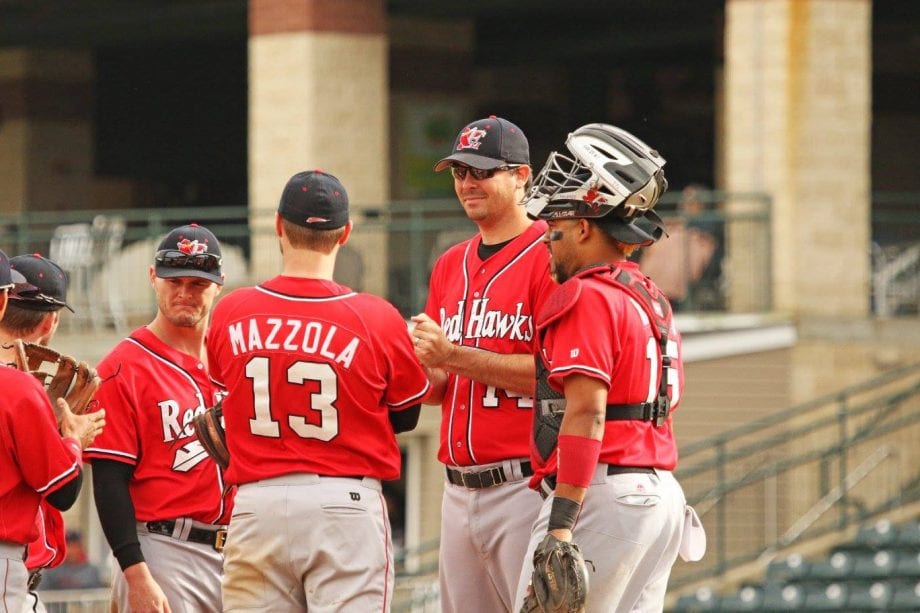 On the mound, the 6-foot-7 right-hander’s career was trending upward.

His first full professional season in 2005 was spent with the Single-A Clinton Lumber Kings. A 10-7 record in 28 starts in Clinton earned him a promotion to Advanced-A Bakersfield, where he would spend 2006 and most of 2007 pitching in the notoriously hitter-friendly California League.

Schlact remembers the challenge and learning experience that came with spending two summers pitching in the California heat.

Schlact earned a midseason promotion to Double-A in 2007, finishing the season with six starts for the Frisco RoughRiders of the Texas League.  He remained in Frisco’s rotation for the entire 2008 season and the beginning of 2009.

That is when he arrived at his next major hurdle. After delivering a pitch during his fourth start of the season, he felt a sharp pain in his shoulder, “like a knife.” It was a torn rotator cuff, which meant surgery and a daunting rehab process.

“That one pitch changed everything,” Schlact recalled. “Everything I had known — my comfort, my identity, was gone at that point. I didn’t know if I was going to come back and pitch again.”

I’ve been in professional baseball 13+ years now, and the recipe for success hasn’t changed one bit.

Those who succeed do so with an unrelenting faith, an unmatched work ethic, an unbelievable passion, unreal grit, an unassuming humbleness, and an unequivocal love for the game.

Schlact remembers becoming extremely bitter and taking on a victim mentality about his injury and what it could mean for the future of his career. Once again it was Jillian, whom he married in 2006, who gave him his wake up call.

“Jillian told me, ‘You are a lot more than a baseball player,’ and that living a Christian life meant relying on God through these times. That was the turning point for me,” Schlact said.

The Rangers did not renew Schlact’s contract following his rehab from surgery, and after two seasons with the independent Southern Maryland Blue Crabs, his shoulder gave out for a second time.

“I had a much stronger foundation in Christ by the time of the second injury,” Schlact said. “I knew that it happened for a reason, I just didn’t know what that reason was yet. I maintained my joy and didn’t dwell on the injury.”

Schlact’s second comeback attempt in 2014, this time with the Amarillo Sox in the independent American Association, was brief.

It was August, and Schlact had allowed six earned runs in two appearances while recording just two outs. He walked in to inform Sox manager Bobby Brown that he was calling it quits, but Brown had a different idea.

“[Bobby] saw qualities of a coach in me and asked me to stay with the team as a bullpen coach for the rest of the season just to see what I thought,” Schlact said.

He knew on day one.

“Everything I had been through, I knew was God preparing and equipping me to be a coach,” he said. “I told Jillian that this is what I am going to do with the rest of my life.

“I had an unbelievable peace.” 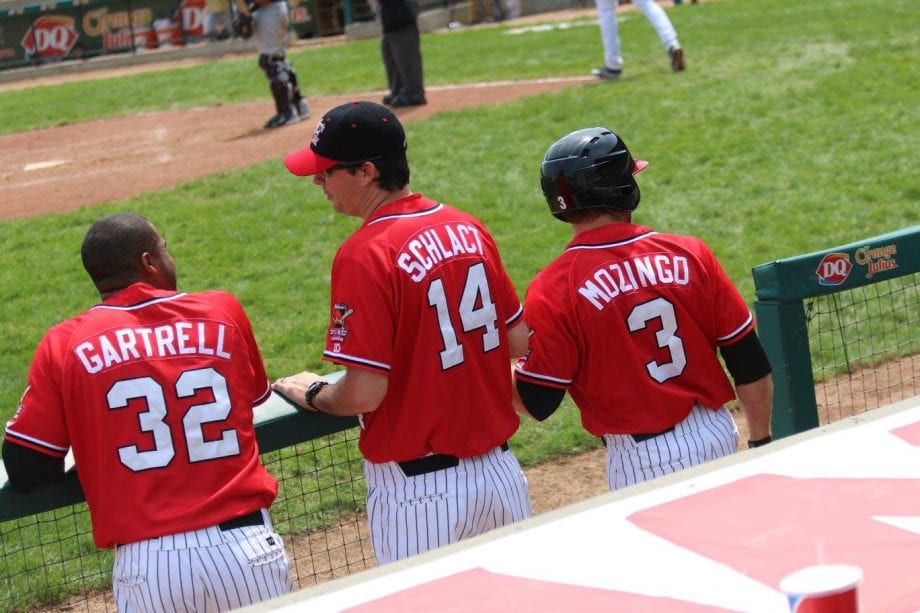 Schlact became the pitching coach of the Fargo-Moorhead RedHawks of the American Association in 2015. He served in that role until August of 2017, when he was elevated to manager.  The team went 16-8 after Schlact was named manager, missing the playoffs on a tiebreaker.

Rather than missing his playing days, Schlact is excited and thankful for the new opportunity to make an impact.

“I wake up every day and thank God the platform I have to speak into people’s lives,” he said. “My job is to win games and help my players improve, and hopefully get them to the major leagues, but that’s all temporary.  If my example, my actions and my thoughts are not pointing them to Jesus, then what I do on the field is ultimately worthless.”

Sports can be an intimidating setting to be bold about faith, and that causes Schlact to put more thought into every one of his actions and words.

“Any time you go against the current, it can be hard, and takes a lot of faith,” he said. “When you are a Christian in sports or many areas of society, people are going to analyze what you say, and try to twist it and take it out of context. The one thing nobody can ever take out of context is the way you live your life.

“I try to be a representative of Christ with every interaction I have, whether it’s with one of my players, an opponent, umpires, or anybody. I have the ability to stay calm when things are out of hand because of the peace and love of Christ,” Schlact said.

Michael and Jillian make their home just north of Atlanta with 3-year-old son Sawyer, and are expecting their second son this March.

“My surgeries helped me learn to really lean on Christ,” Schlact said. “Before, everything was ‘I.’  I have learned when I let God have control and trust His ways, everything will have a purpose.”