In sports or any of life’s pursuits, we can become wrapped up in the temporary goals and victories. We begin to make a lasting impact when we live intentionally, treating all of our actions as an investment in our relationship with God and our eternal life with Him.

That is the lesson Nate Metzger had imparted on his life from an early age, and one he’s now passing on to young men as an assistant baseball coach at Wright State University in Dayton, Ohio.

Metzger grew up in Greenville, Ill, 45 minutes east of St. Louis and Busch Stadium. The oldest of two boys, Metzger says that even though his parents were divorced when he was young, he had an active and positive relationship with both parents, who instilled the importance of faith in his life.

“One parent lived on each side of town after the divorce and I was fortunate to be able to be close to both of them,” Metzger said. “Both of my parents, as well as my stepparents, made sure I always went to church. No matter where the maturity of your faith is at, especially at a young age, just having someone take you consistently plants seeds.”

Emotions fluctuate with the scoreboard, but ultimate joy comes through the saving grace of Jesus. https://t.co/RpEP9E4eET @fcaimpactplay

In 1984, a 12-year old Metzger, along with his dad and brother, built a full-size baseball field with a dirt infield in their dad’s backyard. This was before the movie “Field of Dreams” had been released.

It was while playing at Greenville College, a liberal arts Christian school in his hometown, when Metzger began to build relationships that would form the foundation for his coaching career.

Metzger was recruited and coached at Greenville by David Altopp, a 2009 inductee into the American Baseball Coaches Hall of Fame.

“David Altopp demonstrated the emotional side of coaching to me,” Metzger said. “I learned from him to not be afraid to let players know how you feel about them or anything. He always tried to be open, giving, and was not afraid to cry and show his emotions. We all like to receive, but in order for that to happen, you have to put others first. David lived this.”

Altopp coached collegiately for 35 years, including 16 at Greenville, and has served the ABCA in many capacities, including president. He is currently on its board of directors and Ethics in Coaching committee.

Another influence on Metzger was Robert “Ish” Smith, who preceded Altopp as head coach at Greenville. Smith is the individual most credited for baseball becoming an Olympic sport, which was announced in 1986, and a recipient of the Olympic Order from the International Olympic Committee.

“Ish has such a boldness for Christ,” Metzger said. “The way he carried himself was very professional but not arrogant. There was no ego with him and you could always have a conversation, but when he walked into the room, if you didn’t know who he was, you still thought to yourself, ‘He must be somebody.’”

Accordingly, Metzger looks to Phillipians 2:3-4 to guide his conduct in coaching, and in life.

“Do nothing out of selfish ambition or vain conceit. Rather, in humility value others above yourselves, not looking to your own interests but each of you to the interests of the others.” — Phillippians 2:3-4

“I try to live out this scripture on a daily basis,” Metzger said. “Always put others first, and put yourself not only second, but third or fourth.”

Prior to his current job as assistant coach at Wright State, Metzger spent 10 years (2006-16) as the athletic director and head baseball coach at Heartland Community College in Illinois. One of Metzger’s tasks at Heartland was to establish the athletics department, beginning in 2006.

“I walked in on the first day looking for something to do, and when I went to pull out the filing cabinet for officials, not only was there no list of officials, there was no filing cabinet,” Metzger remembered. “We spent my first year there putting the athletics department in place, which included hiring all of the coaches.

“That was as much fun as I’ve had in my coaching career. (Heartland Community College president) John Astroth has been a great influence and friend to me. The opportunity he gave me to start that program from scratch was a blessing and an honor.”

Administrative changes began at Heartland following Astroth’s retirement in 2010, and in 2016, Metzger felt it was time to move on. Without his next landing spot already lined up, Metzger needed God to show up in a very tangible way.

“Honestly, I would have been happy to stay my whole career at Heartland,” Metzger said. “But sometimes, God calls us when we get comfortable and says, ‘I know you want to stay here, but I’ve got bigger plans for you.’” 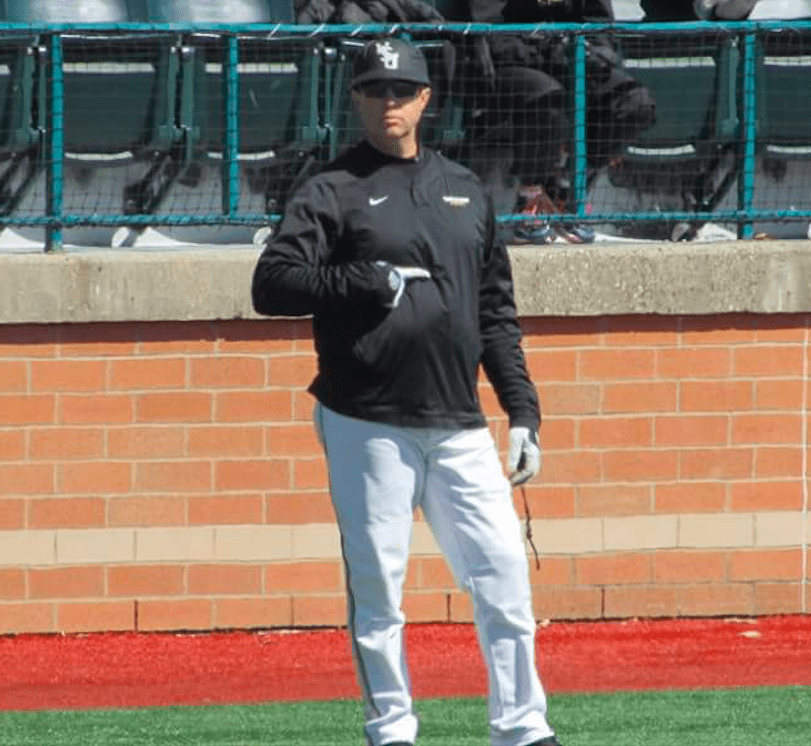 While at Heartland, Metzger built a relationship with Greg Lovelady, who was on the coaching staff at Wright State for 12 years, including the last three as head coach in 2014-16.

“I spent the whole summer praying about what was next; that was a sleepless, anxiety-filled summer,” Metzger said. “Greg reached out all summer, once a week.”

“Our talks changed from Greg checking in to see what I had going on to him telling me, ‘By the way, I just got offered at UCF, and I told (Jeff) Mercer that you are the guy he wants to bring in to join his staff,’” Metzger said.

“It can be a tough and challenging lesson, really accepting that it’s not our plan but His. It can be tough to grasp; it’s natural to want control, but we have to relinquish that control and let God work,” he said.

Metzger was hired in July 2016 as assistant coach and recruiting coordinator for Wright State baseball. His coaching duties include coaching the catchers and assist the offense, as well as helping Mercer with administrative duties.

“It has been a breath of fresh air here,” Metzger said. “I can let my hair down and enjoy the players. The people here have made it easy. There are other Christians on the staff that I can have conversations about faith, including Jeff.”

Metzger acknowledges that there is a balance between baseball and faith when coaching collegiate athletics.

“I do have to separate faith and baseball a bit sometimes, but really, I just try to be myself and be open and natural,” he said. “You can’t be forceful about your faith. When Christians come across as having an ego or try to force it on people, it turns people off. Look for opportunities to be a witness and have a conversation.”

A large part of being a witness, for Metzger, is molding young men into leaders by example.

“Sometimes when we think about being a leader, we think outward,” he says. “To me, it’s more inward. We must hold ourselves accountable first and then others around us.

“Leadership starts with a boldness within. It’s not spoken; it’s toughness within. You have to have direction to say, ‘We have a plan and we’re going to lay it out,’” Metzger said.

Metzger says it’s a similar concept when it comes to faith and a relationship with God.

“It’s about being intentional and having a plan,” Metzger said. “Going to church regularly can be difficult when you’re in sports, so we have to have intent about what we’re doing. It’s important to stay in God’s Word and grow that way.”

“Romans 10, which we’re studying right now, resonates with me in terms of witnessing,” Metzger said. “Whether it’s having conversations or how we go about our daily life, we are called to be disciples.”

It is that realization that gives Metzger a greater perspective about his work.

“If I leave baseball tomorrow, the game will go on,” Metzger said. “None of us are truly that important. It’s not wrong to aspire to win, and it’s great to graduate players, but if that’s the end goal, we’re missing the point. I have served my purpose if I have made an impact on the players I come into contact with and helped them grow as Godly men.

“I think God wants us to continue to grow and push in our faith and opportunities, but we should be content in where we are as well; it’s a balance. You could be the greatest coach on the planet and fail as a husband or father, and that’s not good.”

Metzger lives in Beavercreek, Ohio, 10 minutes north of Dayton and the Wright State campus. He and his wife, Sarah, have been married for 21 years, and have two daughters: 13-year-old Shelby Maddox was given her middle name in honor of Hall of Fame pitcher Greg Maddux, and 11-year-old Morgan Aaron was named for Hall of Famer Hank Aaron.

“Ultimately, it’s not about our time here on earth,” Metzger said. “We can get all sidetracked, so we have to make sure we keep our eye on eternal life and what’s really important.”

RELATED STORIES:
— Minor league manager Michael Schlact says job is ‘worthless’ if he’s not pointing to Jesus
— Josh Mitchell on pitching in Royals organization: ‘God was every bit the reason I made it’
— Ethan Chapman: The Diary of a Minor League Baseball Player