On Tuesday night, Brewers pitcher Chase Anderson pitched a gem of a game against the Chicago Cubs. The right-hander went seven innings, giving up just one hit, allowing zero runs and striking out six in Milwaukee’s 4-0 win. For Anderson, the win was his fifth on the season and snapped a two-game personal losing streak.

He began his pitching career in Arizona after being selected by the Diamondbacks in the 2009 MLB Amateur Draft. After five years of grinding through the minor leagues, Anderson made his MLB debut in 2014 with the D-Backs, starting 21 games and winning nine of them. In 2015, he started another 27 games for Arizona, but in the offseason was traded to Milwaukee as part of a five-team deal. He’s been a mainstay in the Brewers starting rotation since.

Anderson isn’t just a baseball player, he’s also a husband, father and, most importantly, a man with a deep faith in Jesus Christ. He began his Christian walk at a middle school summer church camp.

“While at church camp, I accepted Christ into my life,” Anderson told Bruce Darnall, “I really didn’t understand fully what it meant to be a Christ-follower and how to go about it in my daily life.”

As Anderson went through high school, college and even into his professional baseball journey, God was there, but that deep relationship with Christ wasn’t a priority.

And then, the person he admired most and was closest to throughout his life, his dad, passed away suddenly.

“My dad was everything to me,” Anderson said. “We did everything together. We worked together, and we traveled all over the country playing baseball with my travel ball team. He enjoyed seeing me play the game. But in 2012, my father passed away from a heart attack.”

Wish you were here to experience this with me pops! I love you and so thankful you sacrificed so many things for me! See you soon!

Anderson says it was at this point in his life, losing his father, that something changed inside of him spiritually. He credits his grandmother and a gift she gave him.

“I recommitted my life to Christ. My grandmother left me a Bible which I read before each start, different verses that help me understand how I am to live on a daily basis as a Christian.” Anderson said. “The Lord does not care about our works and our efforts to ‘earn’ our salvation. It is all about Him giving His Son, Jesus, to pay for all the sins we committed in the past, present and in the future. It is all about grace which is freely given.”

Brewers team chaplain Steve Sonderman says Anderson’s faith is very real and something that is inspiring to watch. “From the moment I first got together with Chase at spring training (in 2016), I could tell he had a deep hunger for God’s Word, a love for Jesus and his beautiful wife, Anna. God is working powerfully in this young man’s life and I know that God has wonderful plans in store for Chase and his family.” 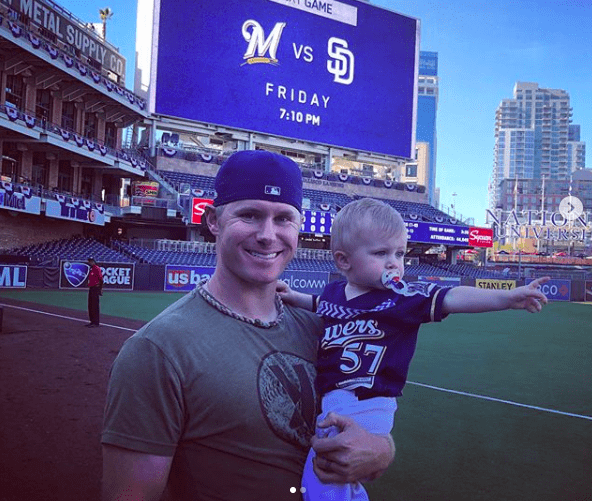 Now married to Anna since 2013 and a dad to baby Hunter, Anderson says remaining in God’s Word and spending time in prayer have deepened the most important thing in his life: his faith.

“God speaks to me when I am in His Word, and days I am not in the Word I have prayer time and know the Lord hears me,” Anderson shared. “God cares about our relationship with Him and how He has a future for me. It is prayer, getting into Scripture daily and understanding you can be a light and salt to others as you spread His Name. My faith means everything to me.”

Anderson and the Brewers conclude their series with the Cubs today at 2:15 p.m. ET. Milwaukee is currently in first place in the NL Central, 0.5 games ahead of Chicago.