KANSAS CITY — Jason Adam smiles when he talks about his first love, and he’s smiling a lot these days.

“Every kid dreams of playing Major League Baseball,” Adam said recently from the home clubhouse inside Kauffman Stadium in Kansas City. “I dreamed about playing for my hometown team. It was an indescribable experience jogging in from the bullpen for the first time, looking up into the stands of the stadium where I grew up watching games.”

The 26-year-old Adam made his Major League debut with the Royals May 5, when he came in in the top of the ninth inning to face Leonys Martin of the Detroit Tigers. He walked Martin, but then got two outs on a strike-em-out-throw-em-out double-play. He finished a scoreless inning allowing just one hit. He had finally arrived, and he was fulfilling a dream.

He appeared in 14 games before being sent back to Triple-A Omaha on June 15. He was 0-1 with a 4.70 ERA (eight runs in 15 1/3 innings), with 16 strikeouts and just four walks. He knows that baseball is a humbling game, but his smile says he was happy just to experience the highs and the lows.

“Young pitchers at times go through little hiccups,” KC manager Ned Yost of Adam’s demotion. “Jason had a couple of little hiccups, but we’re really pleased with his stuff. He just needs to learn to be a little more consistent with it, especially his fastball.” 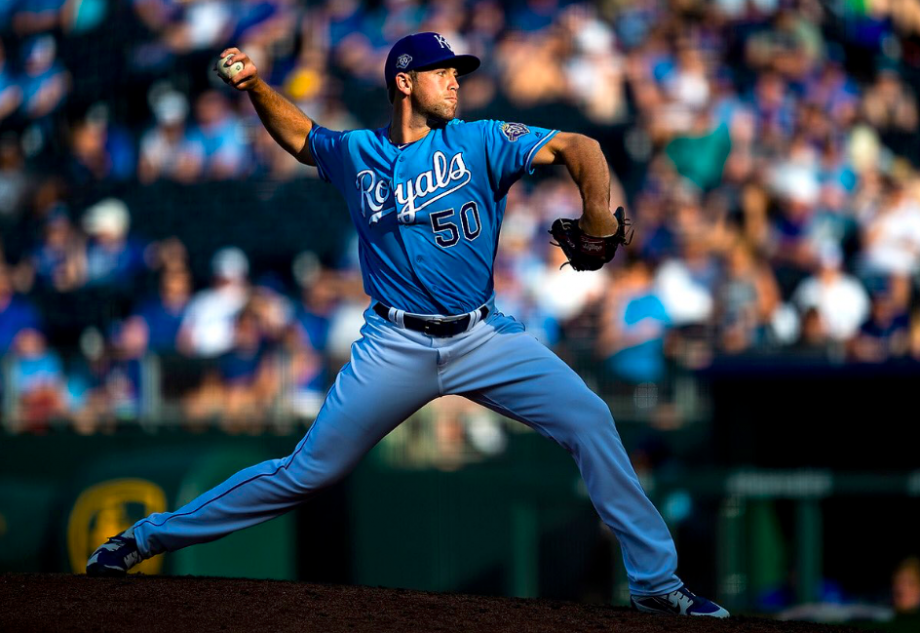 Adam was drafted by the Royals in the fifth round of the 2010 MLB Draft. A flame-throwing right-hander out of Blue Valley Northwest High School in suburban Overland Park, Kan., he worked his way through the club’s minor league system before being traded from to the Minnesota Twins for outfielder Josh Willingham late in 2014, the year the Royals made the postseason for the first time in 29 years.

It was hard for Adam to watch the Royals’ appearances in the World Series in 2014 and 2015 from afar, but he kept smiling.

“It was bittersweet,” he said. “I was pumped for the front office and the teammates I played with. At the same time, I wanted to be there. I was able to work through that and I was thrilled for the guys.”

The hurt of being traded was the least of Adam’s pain. He missed all of the 2015 and 2016 seasons with stress fractures in his arm, enduring four elbow surgeries. None of them were “Tommy John” surgeries, but they still kept him off the field for those two seasons.

Prior the 2017 season, he signed with the San Diego Padres, where another setback limited him to just 13 innings in relief. Following the season, the Padres released him, and he signed a minor-league contract with the Royals. This time there were few expectations from the Royals.

“I took it to the Lord,” he said of his comeback. “I said, ‘If You don’t want me to play, make it clear. But if You do, please give me the opportunity.’”

Adam lit up Double-A and Triple-A this spring, combining for a 1.00 ERA with a 26/6 strikeout-to-walk ratio. With the bullpen struggles the Royals were experiencing at the big-league level, Adam got the call.

But as cool as it was to overcome all those injuries and don the home team’s uniform on a Major League Baseball field, playing baseball for the Royals is not his first love.

He’s been married to Kelsey since December 2015, and they welcomed their first child — Kinsley Joy — on June 24. She weighed 7 pounds, 7 ounces and was 20 inches long. Adam says he’s not sure if she’ll be a lefty or a righty.

A week ago today God blessed us with the sweet arrival of our baby girl Kinsley. While I am experiencing exhaustion on a whole new level, I have also experienced a love that I never knew existed. It has been a tiresome (and messy *insert poopy diaper emoji if that existed*)😉 yet glorious week navigating this new chapter of life – MOTHERHOOD! . We went to church this morning and I broke out in tears during worship as I held Kinsley. When I look down at her my heart is exploding with this deep love, I see Kinsley as pure and innocent. It was such a sweet picture of how God views me, views US! I know the way I look at Kinsley cannot even compare to the love God has for us. So today I am relishing in being a daughter of the King! Thank you Jesus for being my Redeemer and Savior so that I can become one in Christ! || 📸: @kellyjacksonphotography #motherhood #momlife

“It’s the best; it’s awesome,” Adam said, with his grin widening. “It’s just cool to look at her and see this little girl who is fully dependent on Kelsey and me. She’s so innocent and pure. It puts the Gospel in a whole new perspective. We see her so innocent and pure, and that’s how God sees us through Jesus.

“We have to give her back to Him every day. It’s an awesome responsibility.”

Then, turning his topic to Kelsey, he added, “You can’t put into words how important Kelsey is to me. (She) points me back to the Lord. She keeps my head on straight and keeps me focused on the right things. Baseball is a game of ups and downs. To have someone steady who’s always pointing you in the right direction, you can’t quantify how valuable that is.”

As much as Adam loves Kelsey and Kinsley, they are not his first love either. That role belongs to God.

“He’s the Creator; He gives us good gifts, like being able to play this game,” he said with an even bigger smile. “If we start worshipping the gifts, instead of the Giver of those gifts, we’ll find ourselves in trouble.

Jason and Kelsey went through the Kanakuk Institute in Branson, Mo., following the 2017 season, where the goal for all attendees is to learn about discipleship and how to share their faith in the workplace.

Adam has a unique perspective about going through struggles. One of his favorite verses is Romans 8:28, but he doesn’t translate it the way most people do.

“We have small minds compared to the Creator of the world,” he said. “Our good may not look like God’s good. His good is going to be better in an eternal perspective. He only gives good gifts. When you study God’s Word, you can see the character of God and know that He’s good, loving and faithful.”

In spite of the winding road to the big leagues, Adam knows that a lot of people might envy him. After all, only about 15,000 people in history have had the privilege of playing Major League Baseball, and he’s one of them. But his goal is to use the platform of baseball; baseball is not his goal.

His goal is to share the Gospel and he recognizes that a big-league clubhouse is hardly fertile ground. Even an organization like the Royals — known throughout MLB for teaching its players good values — has players who are not receptive to someone sharing his faith.

Adam believes the training he received at Kanakuk is invaluable, because those teammates will look at how he reacts to the ups and downs of the game.

“What will I look like if I get sent down?” he said three days before his demotion. “We’re going to have trials. God allows things in our lives so that we can grow through them. We can demonstrate our faith in Him during those trials.”

After less than two weeks back in Triple-A, Adam was recalled (from paternity leave) on June 27. “A friend told me, ‘It’s a pretty good week when getting called up is not even the coolest part of your week.’”

Nothing is guaranteed for a professional athlete. It’s a pretty safe bet that Adam is going to make the most of whatever opportunities arise.

And he’ll do it with a smile on his face.