Pittsburgh's Sean Rodriguez is in collision with God's will

This story appears in the special 2018 MLB Faith Events issue of Sports Spectrum Magazine, which is being distributed at numerous ballparks this summer, including Pittsburgh’s PNC Park on July 27. To receive the regular quarterly magazine, subscribe here.

A deadly, fiery crash has left Sean Rodriguez’s family grateful — and in awe of God

Sean Rodriguez came to at the sounds of a shotgun firing. He was standing in the middle of Coral Way near SW 99th Avenue in west Miami on Jan. 28, 2017. What he saw when he regained consciousness was a police car on fire, dozens of onlookers, and his black Chevy Suburban on the sidewalk, demolished.

A police officer tried to move him away from the fire, which was causing the shotgun rounds to go off in the police car. “Wait, wait, wait. Hold on. That’s my family over there on the ground,” Rodriguez told him.

“You were driving this car?” the officer responded in shock.

In the moment, Rodriguez did not care to receive the details. He limped over to see his two sons, Sean Jr. (Gogo) and Zekiel, who were being tended to. Paramedics pushed him aside. So he hobbled over to his wife, Giselle, who was also being examined. Next thing he knew, his boys were in ambulances. He tried to hop in with Gogo, who has autism and was 7 years old at the time, but it left too quickly. So he jumped in with Zekiel, who was 2. A third ambulance took Giselle to a different hospital.

All the while, Rodriguez — who had signed with the Atlanta Braves in November 2016 — noticed his left arm wouldn’t move.

Once the boys’ CT scans came back clear and they were stable, a doctor suggested Rodriguez get checked out too. He resisted, told everyone he was fine, and took his parents’ car to see his wife. She sustained the most serious injuries: broken femur, broken tibia plateau, three broken ribs, a broken wrist, a three-quarter torn Achilles and a fractured foot.

Zekiel wasn’t moving when an onlooker pulled him out of his car seat, but he only had internal bruising around where the harness held him in. Gogo suffered a fractured right orbital, a broken right wrist, and numerous lacerations on his head.

As severe as the injuries were, the entire Rodriguez family lived. That wasn’t the fate of the man who had stolen the police car and hit the Rodriguezes’ vehicle nearly head-on. He died at the scene, either from impact or the flames.

Within the week, Rodriguez and his family (which also includes daughters Sofia and Vanelope, who were in another car with other family members at the time of the accident) returned to their home in Tampa. Still experiencing swelling and pain 10 days after the crash, Rodriguez finally visited Dr. Koco Eaton, the team doctor for the Tampa Bay Rays, Rodriguez’s former team. An MRI revealed rotator cuff damage.

At that point he alerted the Braves, who wanted him to immediately see Dr. James Andrews, the renowned orthopedic surgeon. “Come in at 7 tomorrow,” Andrews told him, “you’re going to need surgery.” Rodriguez’s rotator cuff was completely torn, his labrum was torn, and his bicep tendon was completely dislocated. The initial timetable: Doctors told him he’d be sidelined a year. 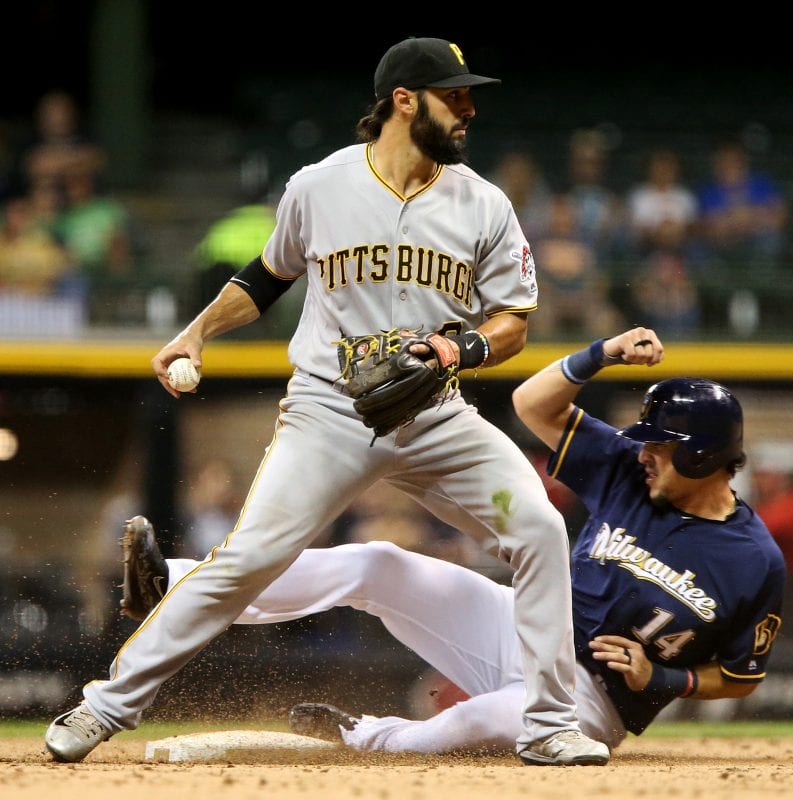 A Miami native, Rodriguez grew up in a Christian home but in many ways learned about God right along with his parents, Juan and Maricela. The Cuban natives fought to make sure Jesus was the foundation of the family (which also includes oldest sister Anays; brother Robert, who played five years in the Washington Nationals’ organization; sister Natasha; and then Sean).

“It was very fresh for my mom and my dad,” Rodriguez says. “My dad came to Christ in ‘85, which is the year I was born. So as I was growing up, obviously I was getting to know God as they were also.”

It was Juan — a coach and scout for numerous professional baseball organizations — who suggested the hand of God was on his son’s car the day of the crash.

“My dad went back to the [scene] and said, ‘You guys had to have been lifted up,’ because you see pictures of the car,” Sean says. “He said somebody grabbed this car and basically placed it right there [on the sidewalk] … because if the car tips over, who knows what happens.

“So we felt like God literally had a hand in us being alive. I mean that. He possibly could have picked up the car, who knows. It’s hard not to sit there, see everything that happened, see everything the way it went down — I mean, we’re continuing to live our lives pretty normal — and not feel like God played a huge factor in us still being able to do that.”

Barely three months prior, Rodriguez signed a two-year, $11.5 million contract with the Braves and expected to be their primary second baseman. He earned the deal after a career year with Pittsburgh in 2016, posting career-highs in average (.270), home runs (18), RBIs (56), OBP (.349), slugging percentage (.510) and games played (140). He also played seven different positions, which had become the norm for the super-utility player.

His time there, however, wasn’t even half as long as doctors initially anticipated. Rodriguez returned to the field in five months, on July 1, 2017, making an appearance with the Braves’ rookie team. He reacclimated himself for the next two weeks in the minors. Then on July 17, he finally made his debut with Atlanta.

Yet, two and a half weeks and only 15 games later, Rodriguez was traded. He and his family were sent back to Pittsburgh. While he hoped to plant himself in Atlanta, his family always felt at home with the Pirates.

“There was so much excitement that I was going back to Pitt, that they obviously wanted me and my family to go back to Pittsburgh. Giselle, me and the kids, we really, really loved it there,” Rodriguez says.

Giselle especially. She wanted God’s will to be done, and if that was to happen in Atlanta, so be it. But for the nine months her husband was with Atlanta, she still felt a pulling on her heart to be in Pittsburgh.

As of the beginning of the 2018 season, she’s still not fully recovered from the accident. Sean and the boys are back to normal, but Giselle has a limp and can’t yet fully walk right. Her regular physical therapy treatments are helping to keep her spirits up, but ultimately, it’s our Healer who sustains her.

“I think He used [the accident] to draw me closer to Him,” Giselle says. “I think He wanted me to know Him personally and intimately and that’s exactly what’s happened. I draw my strength from Him. I’m knowing Him more intimately every day and I think He used it for that, which is very unfortunate, but I’m kind of glad that He did because I know Him personally now. Before I did but not this way; it’s very intimate now. I’m not glad [the accident] happened but I’m glad that because of it I’ve grown closer to Him.”

Less than two weeks after Rodriguez rejoined the Pirates, the club held its annual Faith Night. Sean had shared his testimony in front of thousands of fans in 2015 and ‘16, but in ‘17 he was able to speak of God’s faithfulness after enduring the accident. He sees it as no coincidence that he returned just in time for Faith Night. 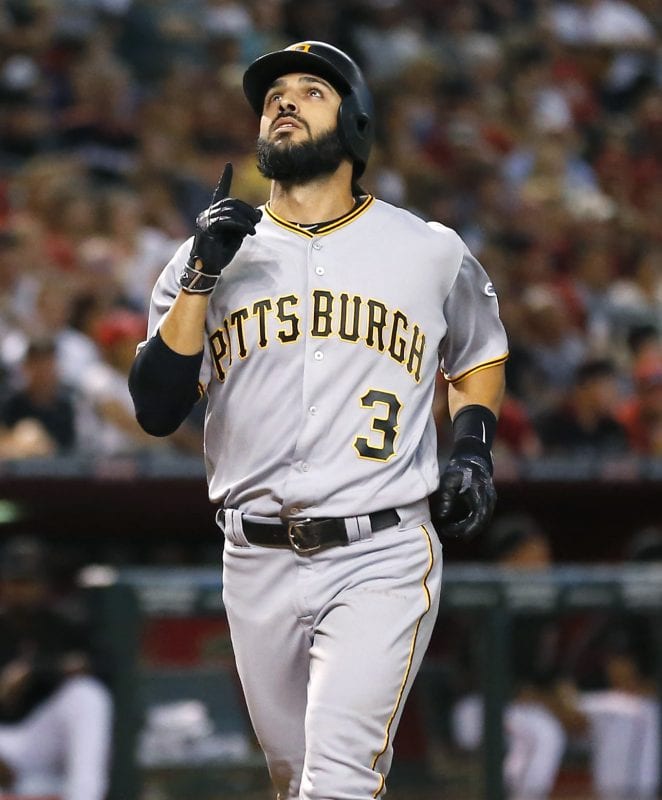 “I’d always speak so highly on how much I love it in Pitt, and that is one of the main reasons why I do: One, because of Faith Night, but two, because of the people who are actually trying to make sure that Faith Night continues to be a big deal in this city,” he says. “Because we’re obviously reaching people. We’re sharing our testimonies and getting to answer questions [fans] submit. They get to see us and hear us speak about our faith, and what helps keep us being the men that we are, continuing to grow and to be better men.”

Rodriguez says he’s emerged from the accident spiritually and physically stronger. “Probably better now than I was two years ago, even before the accident,” he says. “I’m definitely back to 100 percent, thank the Lord, and feeling amazing.”

But more than anything, he’s in awe of God’s power.

“He gave me this because He wanted to show His strength and His power through me and through my family, and see how we wouldn’t take it and resent, but just continue to say, ‘Thank you Lord’ for what He does allow us to have,” Rodriguez says.

“It really does allow you to see we’re not in control. He is in control of what’s going on, He’s in control of everything. He chooses life or death if and when He wants, and we can’t question that. He’s ultimately in control.”