Gateway to Faith in St. Louis

This story appears in the special 2018 MLB Faith Events issue of Sports Spectrum Magazine. Support our ministry and subscribe here.

God’s Word is being passed down from Cardinals veterans

For more than a century, the Cardinals have been the heartbeat to fans young and old throughout the Midwest. The Gateway City — home of the Gateway Arch, which oversees Busch Stadium — has long been a home for legends, such as Bob Gibson, Lou Brock, Ozzie Smith and Stan Musial.

And nestled inside the clubhouse, a culture within that culture has developed among a close-knit community of Christian players and coaches. As the current crop of Cardinals seeks a 12th World Series title, a veteran warhorse and the team’s manager are looking to pass their wisdom and knowledge on to the rest of the team — not only on the field, but off it as well.

Adam Wainwright vividly remembers the day he saw the impact a well-known baseball player could have on others. During spring training when he was with the Braves in the minor leagues, word got out that Hall of Fame pitcher John Smoltz was going to speak at a Bible study. Wainwright, a Georgia native and avid Braves fan who grew up watching Smoltz pitch for Atlanta, sat in attendance at chapel and heard the Hall of Famer talk to a room full of players about his faith in Christ. Smoltz’s words struck a chord with the young pitcher, and Wainwright knew he needed to make some changes in his life.

“It was powerful to see a future Hall of Famer come and pour his heart and soul into a message for us,” Wainwright recalls. “I know that I was on the fence at the time in my own faith, as I’m sure many others in the room that night were, and we were able to see someone who we really looked up to share his faith through the platform that he’s been given. By this platform, many are able to come to know and trust in Christ.” 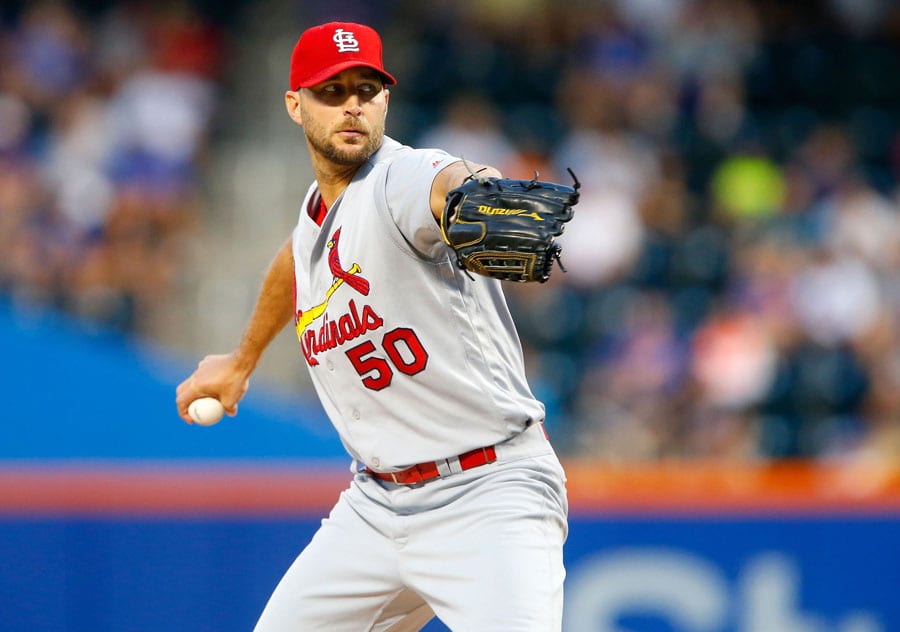 Now at 36 years old and having established an illustrious career as a St. Louis Cardinal, Wainwright continues to pour out his heart to his teammates in the locker room (he was traded to St. Louis in 2003). As a team leader and mentor, he understands that because of his stature and on-field success as a three-time All-Star, he’s able to have much deeper conversations concerning things other than the game of baseball.

“We are looked up to as leaders, and naturally we have an ‘in’ with the younger players simply because we have the knowledge and experience that they want to learn from,” Wainwright says. “When we can also speak into their lives on deeper matters — on things besides baseball — it provides a huge opportunity for us to share Christ’s love with those who are eager to hear what we have to say.”

One young player who has been affected by the mentorship is Luke Weaver. The 24-year-old pitcher was inserted into the Cardinals starting rotation last August when Wainwright was placed on the disabled list with an elbow injury. Weaver went on to compile a 7-2 record with a 3.88 ERA. During his time in the locker room late last season, he was greatly impacted by the Christian community.

“It’s incredible because if you would’ve told me what I’d be getting myself into joining the Cardinals, I would have had no idea,” Weaver said. “Going up through the levels [in the minor leagues] and getting to this point where I’m meeting the Hollidays, the Wainwrights and the Carpenters, those guys and being able to just be filled by their walk and their talk, it just inspires me. It makes me want to be that next wave — be that guy who’s soaking in all this wisdom.”

Weaver and his teammates are also able to receive nuggets of wisdom during the weekly chapel services. Since games are held on most Sundays throughout the season, players and coaches don’t get the chance to go a traditional church service. To make do, they get to hear a 15-minute message on a subject from the Bible before a game.

“Chapel is one of the things that a baseball player knows is safe; they know they can go there and be encouraged by a short, impactful message that will help carry them onto the next week,” Wainwright says.

Guys take conversations from chapel to the meeting rooms, to the locker room, to the bench, and sometimes they even become the topic of choice during road trips. The community study helps create a stronger team bond and develops a level of accountability that carries over to the field.

“Iron sharpens iron and to be able to be around other believers in the clubhouse certainly makes for a better experience when you come to work every day and you get to be around them, and the impact that you have around others that are either new to their faith or either searching for it. So it’s quite a blessing,” Cardinals first baseman Matt Carpenter says.

“The locker room is such a great place for us that we see everyone everyday in just casual conversations, so why not have a conversation about that,” Weaver says.

The culture in the locker room starts with the leadership at the top. Since being hired in 2012, Cardinals manager Mike Matheny hasn’t been shy about letting others know the important role the Christian faith has in his life. Known as the “Toughest Man Alive” for his hard-nosed style of play as a major league catcher for 13 seasons, he understands the value of having a tight-knit locker room over the ups and downs of a 162-game season.

Once a year, Matheny shares his faith with fans at Busch Stadium in a postgame event called Christian Day at the Ballpark. Several years ago, Matheny told the crowd his goals for the team and noted that winning wasn’t the only thing he was looking to achieve.

“His main goal is not just performance on the field, but he realized this is a group of 25 young guys who are also navigating life. So he wants to be a help and a direction and a manager for them as they kind of learn how to navigate life, not just how they perform on the baseball field,” says Cardinals Director of Ticket Sales & Marketing Martin Coco.

“My Christian faith is the guide for my life and I have never been one for forcing my faith down someone’s throat, but I also believe it to be cowardly, and hypocritical to shy away from what I believe,” Matheny once wrote in a piece called the “Matheny Manifesto.”

The outward expression of faith among Cardinals sometimes even makes its way to the field. Praying on the mound is something Weaver likes to do before he pitches. 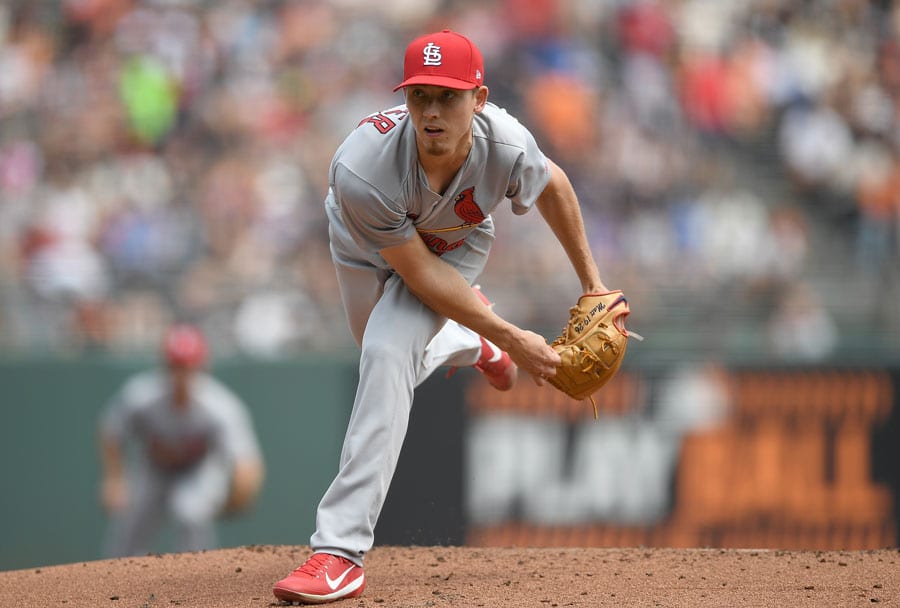 “I know for me out there on the mound, each inning I try to give a small moment where I slow down the game and give it to Jesus, and just pray for people on the field and just for health. And not for gain or for loss, but just for the mere fact of where I am at for the moment and knowing that the platform is just more than trying to win the ball game. It’s really cool for me just to have that moment,” Weaver says.

Once the season is in full swing, several new challenges face the young pitcher.

“I’m still trying to earn a rotation spot on the team,” he said before the 2018 season. “While that can threaten to be stressful, I don’t let it be. Instead, I’ve been allowing God to stay in control of it all. Knowing everything is in His hands gives me a peace, so I can enjoy the game and work my hardest to be the best I can be. I can breathe easy knowing my steps are already perfectly planned out by Him.”

One of Weaver’s biggest goals is better consistency from the mound. Standing at 6-foot-2 and a slim 175 pounds, he knows making the rotation is one thing, but being available to pitch every fifth day over the duration of a season is going to be tough.

“It’s going to take a toll on my body, I know. I’m not the biggest guy in the world so there’s a durability aspect that some question me on. But I know I have the strength from within and that strength is driven from the Lord. I just need to be smart and listen to my body. Though I’m tired on some days, I know I can rely on Him for the extra adrenaline and push that I need,” Weaver says.

When the season gets tough for Weaver and the other Cardinals players, they don’t have to look too far for guidance. The culture nurtured by Wainwright, Matheny and others will allow guys like Weaver to blossom both athletically and spiritually.

“I’m thankful I have a group of men around me who will hold me accountable and sharpen me to grow closer to Christ each day,” Weaver says.

Years after incredible comeback, Aaron Barrett calls it a career: ‘I wouldn’t be here without God’