For Jaime Garcia, a 10-year veteran of six major league teams, his fear of public speaking and long-time struggle with anxiety could only be overcome by obeying God’s call to openly share the Gospel.

“I’m an introvert who likes to keep to myself,” said Garcia, as he reflected on being isolated during quarantine. He explained that his chaotic childhood shaped his shy and quiet tendencies. Growing up in Mexico, he did not see himself as a communicator. Rather, he identified as a boy who lived with much shame and anxiety.

In a recent episode of Quarantine Questions, a collection of YouTube interviews I conducted during COVID-19, Garcia said, “I grew up in a very toxic environment. There was a lot of shame, insecurity, depression, anxiety and ADHD. There were a lot of issues growing up, big time.”

He lived with a series of injuries, lost his edge, and lagged academically. When his family moved to the United States, he barely spoke English. This, too, added to his self-doubt. Plagued by the uncertainty of a new life in a new country, Garcia turned further inward, unable to connect with others through words.

But the Lord pursued his heart and surrounded him with people who would help put him on a path to not only a successful career in professional baseball, but a life as a public speaker with a far-reaching platform to share the good news of safe water and the Living Water. He emerged as a lay minister who would boldly and confidently share his testimony.

“I believe Christ had a plan for me that He brought people into my life as a teenager — mentors who modeled Christ’s love,” Garcia said. “It’s been such a journey of finding Christ and healing through the process.”

Little did Garcia know that after years of fearing public speaking, the Lord would grow in him a passion for sharing his testimony of faith. He would leave the comforts of his home — and of his solitude — to be of service to hundreds of people in need.

Today, he is retired from playing professionally and, like myself, has joined in partnering with Water Mission, an engineering ministry that provides safe water, sanitation and hygiene solutions in developing nations. 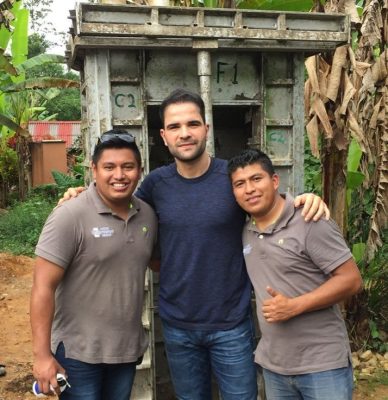 In Mexico, widespread water scarcity and water contamination affect most of the population, particularly its low-income citizens. Garcia has partnered with Water Mission to help bring hope and share God’s love to communities in Mexico through safe water. He has been on two trips to Chiapas, one of the most impoverished regions in the country. Growing up in Reynosa, near the Texas border, he fully understands the challenges that come with drinking contaminated water.

“I remember people getting sick and just accepting it as a part of life, but now I see that it was because of the water they drank,” Garcia said. For the past few years, his generosity has helped to transform the lives of hundreds of families across several communities.

He enjoys visiting and engaging with the beneficiaries of the projects he supports and shares his powerful story with them — in Spanish, his native tongue. Having witnessed him speak to an audience, I can attest to the tremendous impact he has on people, simply because he’s from Mexico and can identify with them and their reality.

Garcia also brings with him the message of what could become of their lives should they have access to basic resources and have Jesus in their hearts. He represents hope.

“Going through all that shame and anxiety was a big part of my growth and the perspective I have now … it’s part of what built my character, compassion and empathy for people who are suffering,” he said.

Garcia is the complete ministry and prayer partner. Not only does he give freely of his financial blessings, he advocates among his network and has encouraged many others to partner with ministries such as Water Mission. He gives of his time by visiting communities, gets his hands dirty and helps build safe water systems and latrines, and then blesses people with his words.

His devotion to honoring God and ministering to others is evident in the way he so passionately speaks about God’s love for him.

As the Bible teaches in 1 Peter 3:4, Garcia’s strengths lie not in his professional successes nor the material things he has gained, but in the hidden Person of his heart. Our Heavenly Father has used the years he spent withdrawn from the world for His glory, making Garcia’s inner life a wellspring from which he could connect with and bless others, discipling them in love and truth.

When asked how he overcame his anxiety and fears, he pointed back to Jesus.

“Even though I am a very committed and hardworking person, I can’t take credit for it,” he said. “The platform God has given me, and the struggles and opportunities God has blessed me with, that’s where it all started. Now, I can share safe water in homes and at schools, and speak about God’s gifts and what He’s done in my life.”

Watch a video on Water Mission’s work in Mexico here:

To learn how Water Mission has brought safe water to more than 5 million people around the world, visit  Watermission.org/jointheteam.