Thanks to Stephanie Davis, the national program director, these leagues are available to children with special needs all over the country.

The Miracle League is a nonprofit organization that provides opportunities for children with special needs to play baseball. The main barrier for these kids is the natural grass fields used in conventional leagues. So The Miracle League builds custom-designed, rubberized turf fields that accommodate wheelchairs and other assertive devices while helping to prevent injuries.

The first Miracle League field opened in Conyers, Georgia, in 2000. The concept quickly began to grow and by 2002, fields opened in South Carolina, Alabama, West Virginia, Illinois and California. Now there are 240-plus Miracle League organizations across the country and in Puerto Rico and Canada, serving 200,000-plus children and adults.

Every year, The Miracle League has an All-Star game weekend filled with games and fun for all children. The events are planned two to three years in advance and involve Davis working closely with the host city to make it all happen.

“What we do is we work with that local Miracle League on every aspect of the All-Star weekend, everything from getting the kids into that city somehow, whether they fly or drive, and then accommodations and everything that they would need for that entire weekend,” Davis told Sports Spectrum.

The weekend kicked off Friday night with check-in and a meet-and-greet event for all the families. Friday night served as an opening ceremony for the games that were held all day Saturday. The games Saturday were followed by a dance for the kids and families. On Sunday, the event closed with a banquet and awards ceremony.

Davis first became involved with The Miracle League in 2001 and hopes to continue to see the organization grow.

“I did some research and found the organizers of the original league, and we were just so inspired that we decided to replicate the idea and start the second local Miracle League, which was in Myrtle Beach, South Carolina, in 2002,” Davis said in a Samaritan Ministries newsletter.

At the time, Davis had experience working with individuals that had disabilities and was looking for new ways to help them. With sports being a huge part of her life growing up, Davis knew she had to get involved and felt the Lord calling her to help.

“It is now my mission to use the gift that God gave me to provide everyone that opportunity to play no matter their ability,” Davis told Samaritan Ministries. “I try my best to show the love of Jesus to everyone I serve. I feel like this is the calling that God has given me.”

Davis’ main role is to consult with local organizations as they establish a local complex and league. It could be an individual company, or an already established nonprofit. Some of the most common partnerships Davis has seen are with local YMCA chapters or with a city or county that oversees parks and recreation. 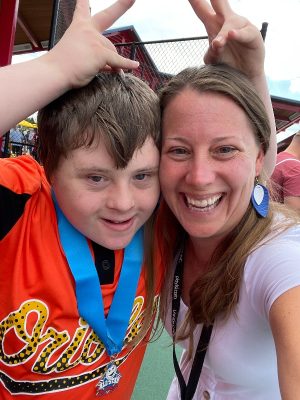 “From there, they typically organize some type of nonprofit that raises the money locally,” Davis told Samaritan Ministries. “All money does stay local. We consult with them on best practices of how to build the field and run the program without having to reinvent the wheel. We bring a lot of different avenues and benefits to the table to help them.”

The Miracle League also provides opportunities beyond the baseball diamond. The leagues are a place for children to make friends and build self-esteem.

“It brings so much joy to families because we are providing the players a way to be included in a team sport, which has never happened for them before,” Davis told Samaritan Ministries. “Most of the joy we see is from being with friends and coaches and buddies, as well as spending time outside. They are getting exercise and fresh air, but most importantly they have a place to belong.”

Davis gave her life to Jesus at age 21 and has found a way to combine her passion for sports with serving the Lord.

“When I met my husband I started attending church, and he was saved as a child. And we were in long-distance relationships. So we started just getting into the Word and doing things together with that, and I was 21 years old when I did come to Christ,” Davis told Sports Spectrum. “I grew up in an incredible family [in which] sports was a part of my life and that’s kind of what shaped me as a human. And then to have that transition in my 20s was just incredible to be able to bring that to all aspects of my life.”

“The biggest thing for me is just being able to be of service to somebody, and help them with a need that they may have, which would bring joy and happiness, and be able to show them the light of Christ through that,” Davis said.