“But a man named Ananias, with his wife Sapphira, sold a piece of property, and with his wife’s knowledge he kept back for himself some of the proceeds and brought only a part of it and laid it at the apostles’ feet. But Peter said, ‘Ananias, why has Satan filled your heart to lie to the Holy Spirit and to keep back for yourself part of the proceeds of the land?” Acts 5:1-3 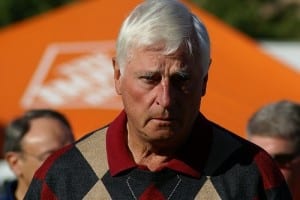 Former college basketball coach Bob Knight, one of my favorite coaches of all time, is known for his aggressive style of coaching and intimidation techniques he would use on his players. He would oftentimes kick his players out of practice if they were not living up to his demands. If it didn’t look like a player was giving his all, Coach Knight would send them to the locker room. The purpose, of course, was to make them better individually and the team better as a whole.

At the beginning of the fifth chapter of Acts, we read about Peter confronting a couple, Ananias and his wife Sapphira, for their half-hearted approach to tithing. Not only was it deceitful and disrespectful on their end, but part of me also believes that Peter understood that they were cutting themselves short, as well. Bob Knight would sometimes kick his players out of practice because their half-hearted work ethic was preventing them from reaching their full potential. Similarly, Ananias and Sapphira were not experiencing all of God because they were not giving their all to God. Have you ever viewed spirituality in this way? God doesn’t demand your all and ask him to make Him Lord because He wants to control you; He wants you to give your all so you can enjoy and experience Him to the fullest, for He alone is the source of all joy and peace.

Stephen Copeland is a staff writer at Sports Spectrum magazine. Log in here to access our most recent Training Table. Subscribe here to receive 12 issues a year and a daily sports-related devotional.