Featured: On Top of His Game

By Sports Spectrum Dec 8, 2016
NEW ORLEANS, LA - JUNE 24: The New Orleans Pelicans 2016 Draft selection Buddy Hield poses for a picture with his mother Jackie Swann on June 24, 2016 at the New Orleans Practice Facility in New Orleans, Louisiana. NOTE TO USER: User expressly acknowledges and agrees that, by downloading and or using this Photograph, user is consenting to the terms and conditions of the Getty Images License Agreement. Mandatory Copyright Notice: Copyright 2015 NBAE (Photo by Layne Murdoch/NBAE via Getty Images

To achieve his college player of the year season and lead his Oklahoma Sooners to the Final Four for the first time in more than a decade, Buddy Hield replied on a series of exacting plays which resulted in an incredible, award-winning senior season.

But to get to where he is in his life, the Freeport, Bahamas, native has relied on a more important playbook, the unwavering prayer support of his mother and his daily Bible readings in God’s word.

“Psalm 23 is the one I always read, the main one before my games,” says Hield, who was drafted XX in the NBA draft on June 23. “My mom always told me to read that when I was nervous or before a big game.

While opposing teams schemed for any way possible, mainly in vain, to stop Hield’s award-winning college basketball season this year, he revealed his source of strength in the scriptures to a national TV audience after the Sooners Regional Finals victory over Oregon.

“I was nervous before the game today, but I just prayed and read the Bible. That always calms me down. That’s get me in my rhythm,” Hield told the CBS national broadcast after the game and added before hundreds of Final Four media in Houston days later.

“I will read the Psalms, which is what my mother taught me to do at an early age. I know she will be praying and so will I. It calms me down.”

While the Sooners fell short of their National Championship on-court goal, losing to eventual overall winner Villanova in the semifinals, Hield, who won several national players of the year honors (Wooden Award, Naismith Award, Oscar Robertson Trophy and Sporting News Player of the Year), and became the Big 12’s all-time leading scorer, along with winning the Big 12 Player of the Year for the second consecutive time, was remembered for his overall impact and priorities.

“Regardless of the final outcome, people will also remember Buddy for the positive influence he had both inside and outside of our program,” says Oklahoma head coach Lon Kruger. “He will be remembered for positive exuberance.’

Hield’s remarkable story from a poor Bahamas school kid with nothing but an outdoor net to practice on, to his moving to the United States in 2010 and attending Sunrise Christian Academy in Kansas and then moving on to Oklahoma, is amazing enough.

But Hield said God’s hand in the process, primarily through the unwavering prayer support of his mother, Jackie Swann, is what made this past season so rewarding.

“She will be waking up praying in the morning,” Hield says. “Even when she is tired or worn out from working, she will always pray.”

Jackie has been known to hold up the team bus to pray for Hield and his teammates, gathering them in a circle in some opposing team driveway or Oklahoma practice facility. She’ll often wander the hallways of a stadium where the Sooners are playing to pray for her son, his teammates, the other team, for health, success and a way to honor God through basketball.

He said watching his mom and God at work during the season showed him the power of prayer and the power of perseverance in seeking God.

“That has been the constant in her life, some people say they will pray for you and they do it once a month,” Hield says. “She is consistent. She will do it every day. She has been teaching me that.”

It was a lesson that wasn’t missed by Hield’s Oklahoma teammates. 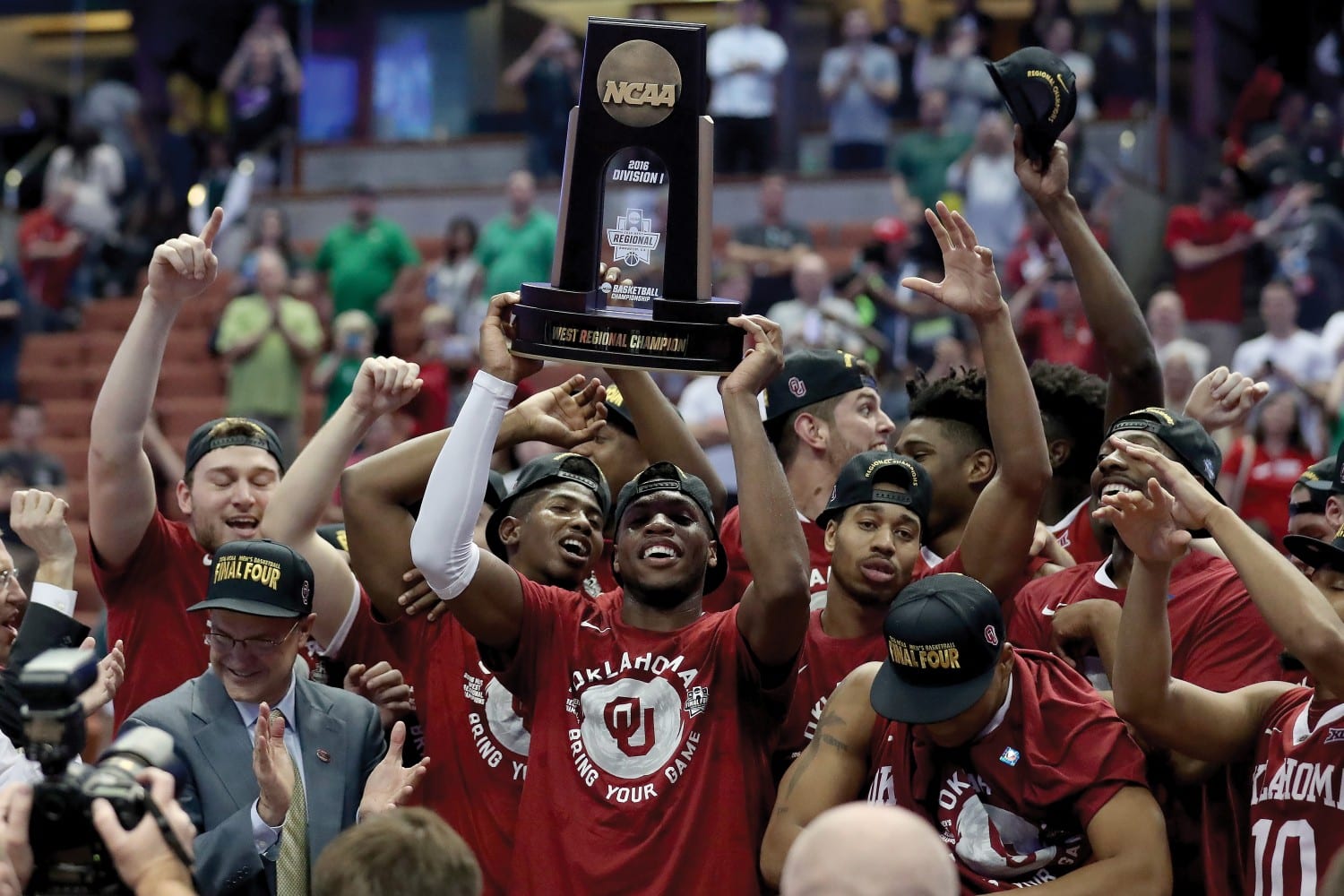 When Isaiah Cousins came to live with Hield and his mom near the Norman, Oklahoma, campus, the first thing she did was ask how she could pray for him and began asking God to bless him and his life.

Khadeem Lattin grew up in the rough streets of Houston, Texas, with his own praying family and quickly saw what a difference having spiritually united men on the Oklahoma team could make.

“We are all Christian men here, we all support one another. We’re used to it. You wanted to show your faith in all ways. My mom taught me that and I want to honor her and my grandmother’s memory in all that I do,” Lattin said

“One thing about my mother and my grandmother is they were always strong in their faith in Jesus Christ and that’s what they passed to me. I can remember their favorite saying was hold strong to your faith because that is what’s going to last.”

Lattin saw his grandmother pass away just days before the Final Four game, but used his earthly sadness to fuel his play and undergird his eternal joy.

“She always told me God is the way for everything and I learned it’s always been a positive influence to have Him back in my life,”

The Sooners weren’t the only high profile team to boldly share the power of prayer and God’s ultimate purpose at the NCAA closing college basketball weekend.

Speaking at the annual Athletes in Action Final Four breakfast, Texas A&M head coach Billy Kennedy, whose path to college basketball success was ended by Oklahoma in the Sweet 16 this year, said God was using him for His real purpose in basketball.

“For two years, my wife and I prayed we would raise a banner at (Texas A&M’s) Reed Arena, and this year God showed me the banner was the lives of the young men we are charged with,” he said. “My wife has always given me Ephesians. 3:20 as my key verse, and we won our (final) comeback game on March 20. It just shows God is always working in my life.”

Kennedy grew up in New Orleans and played junior college basketball with marginal success before he decided to get into coaching and work to impact kids’ lives for good and for God.

“God is the author of all things and allows all things. That made a huge difference in my career because I saw God was directing me where he wanted me to go,” added Virginia Tech Buzz Williams. “It changed my whole insight on my career.”

While Villanova cut down the basketball nets as the NCAA champions after a final championship game for the ages, the power of prayer and the impact it had on college’s top players and coaches was the biggest winner of all.

With Hield, though, his journey will continue in the NBA with XX and he’ll get to see how God uses him on the platform of pro basketball.

Art Stricklin is a longtime Sports Spectrum contributor who lives in Texas.